Vatic Note: This is what a fascist system looks like. Ripping off those that serve you when you are no longer productive. Its a form of Eugenics and depopulation. Weath accumulation by slave service and serving as fodder for their wars. This is what you would expect from an "enemy" of our country and not from our own American leaders, but then we are occupied aren't we? And by the same people who have killed thousands of us in many false flags to achieve their own agenda. Its what happens when you allow psychopaths to live. They are more dangerous than any other threat you can imagine. And they are not done with us yet. Wait til we see what else they have planned for us. 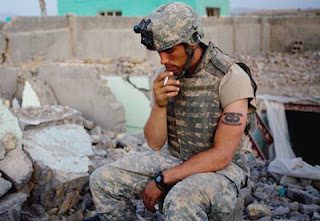 Wall Street and other financial scammers do it from the living, Prudential and many insurers from the dead, ripping off families of killed war vets. On July 28, Bloomberg.com's David Evans discussed how it works in an article titled, "Fallen Soldiers' Families Denied Cash as Insurers Profit," a polite way of explaining grand theft. From the living, it's bad enough, from the dead, it gives chutzpah new meaning, affecting countless thousands of bereaved families.

Evans wrote about one, Cindy Lohman. Two weeks after her son Ryan was killed, she received a Prudential Financial, Inc. "9-inch-by-12-inch envelope," the company managing life insurance for the Department of Veterans Affairs (VA).

A letter explained. As his beneficiary, she was entitled to $400,000 in death benefits along with something looking like a checkbook. The funds "would be placed in a convenient interest-bearing account, allowing her time to decide how to use" them, the letter saying:

"You can hold the money in the account for safekeeping for as long as you like," plus a disclaimer in easily overlooked fine print, explaining "what it called its Alliance Account," a non-FDIC insured scheme, a ripoff to defraud beneficiaries like Lohman.

After leaving the funds untouched for months, she tried unsuccessfully using one of the "checks," then failed a second time. She was "shocked," saying she thought the money was FDIC insured, in a bank, to be used freely.

Not so. The "checks" were drafts or IOUs. "That money - like $28 billion in 1 million death-benefit accounts managed by (130 insurers like Prudential) wasn't actually sitting in a bank." It was in Prudential's general corporate account earning income - around 4.8% for insurers, 1% or less for survivors. This summer it was 0.5%, less than half what some banks pay on jumbo CDs, and way less than insurers yield on their investments.

"It's a betrayal," said Lohman. "It saddens me as an American that a company would stoop so low as to make a profit on the death of a soldier. Is there anything lower than that?"

For sure - waging an illegal war of aggression, sending young men and women to die for a lie, Ryan Lohman one of thousands affected (plus others maimed and disabled for life), their deaths compounded by insurance fraud ripping of their survivors, and VA officials doing nothing to stop it, claiming ignorance when they damn well knew or easily could have found out. For every branch of government, the business of America is business, the public their patsies to be scammed of their money, health and welfare.

They've become standard practice "in an industry that touches virtually every American: There are more than 300 million active life insurance policies in the US, and the industry holds $4.6 trillion in assets, according to the American Council of Life Insurers."

Insurers tell survivors their money is safe, guaranteed by them not the government, making them woefully unsafe when investments are ripped off, and the principal depends on the company's health.

"It's institutionalized bad faith. In my view, this is a scheme to defraud by inducing the policyholder's beneficiary to let the life insurance company retain assets they're not entitled to. It's turning death claims into a profit center," and Washington lets them get away with it.

Three firms, including Prudential and Metropolitan Life, handle retained-asset accounts for about 130 life insurers. No public records show how much, but at least $28 billion is involved.

Besides scamming beneficiaries, insurance companies may be violating federal bank law - a 1933 statute making it "a felony for any company to accept deposits without state or federal authorization." Only chartered banks and credit unions can do it. Insurers aren't chartered or regulated, so funds they hold for beneficiaries will disappear if they go under.

Further, the bogus Obama administration "financial reform" doesn't address retained-asset accounts, only a new federal insurance office with no teeth. The same holds for the entire bill, a gift to Wall Street and big insurers, small investors left unprotected, or as one analyst explained - "austerity" for the public, high times for the big boys, and why not. They wrote the bill and got what they want as they did for "healthcare reform" and everything else Congress enacts, corporate occupied territory like the White House and all federal agencies. How else could Wall Street and insurers like Prudential commit fraud and get away with it.

Pru and Met Life alone rip off hundreds of millions of dollars annually, stealing one of their main profit centers with no accountability. Since 1999, the VA let Prudential send survivors "checkbooks" for its Alliance Account. "In 2009 alone, (recipient) families....were supposed to be paid" $1 billion in death benefits "immediately, according to their insurance policies. They weren't."

Pru VA policies offer either a lump sum payment or 36 monthly installments. About 90% choose the former and get a "checkbook," not a cashable check. Yet under a 2008 law, recipients have one year to put their funds into a tax-free Roth IRA. Lohman said Pru never told her. Unless Congress corrects the fraud, she and other recipients "will remain a secret profit center for the life insurance industry," their officials robbing the graves of dead soldiers.

On August 30, AP reported that the parents of six dead soldiers "are suing Prudential Financial, saying it paid paltry interest on military life insurance benefits while keeping more generous" payouts for itself.

Filed in Springfield, MA US District Court, it accuses Pru of using "bookkeeping maneuvers," misrepresenting how benefits are handled. "Their attorneys are seeking class-action status" for potentially tens of thousands of others.

One of four attorneys involved, Cristobal Bonifaz, said lost interest varies, "depending on how quickly beneficiaries withdrew the money," those leaving it untouched (the great majority) owed the most, as much as $30,000 per recipient.

"What we're saying to Prudential is, 'You kept investing the money, but that money did not belong to you as of the day that person died, and whatever you made off it, you should give to those persons it was meant for."

Hundreds of millions of dollars are at stake. Plaintiffs in the current suit are parents of soldiers who died in Iraq, Afghanistan, El Salvador, and those dying after returning home.

Lead plaintiffs, Kevin and Joyce Lucey, spoke for many saying: "It's totally unacceptable for any company to think they can treat any family that has gone through this kind of trauma, especially military families. (We) think it becomes part of our responsibility to make sure no one has to go through anything similar to this."

Given Washington's complicity with banksterism, insurance fraud, and numerous other corporate scams, imagine how many others haven't come to light. Imagine also the challenges ordinary people face for restitution, even by class-action, deep-pocketed bigness and business-friendly courts huge hurdles to overcome, plus interminable litigation years, especially when high stakes are involved.

Stephen Lendman lives in Chicago and can be reached at lendmanstephen@sbcglobal.net. Also visit his blog site at sjlendman.blogspot.com and listen to cutting-edge discussions with distinguished guests on the Progressive Radio News Hour on the Progressive Radio Network Thursdays at 10AM US Central time and Saturdays and Sundays at noon. All programs are archived for easy listening.