How Dangerous are the Muslims?

How Dangerous are the Muslims?

Messages of hatred against Muslims in the United States have come so thick and fast over the past few months, I hardly know where to begin addressing them. In Florida, a self-proclaimed "Christian minister" has turned his back on Our Savior's example of love, meekness, and humility to say that he'll lead a Koran-burning on September 11.

In New York, narrow-minded people are freaking out over a Muslim-run community center that is nowhere within sight of the former site of the World Trade Center, yet they're calling it a "Ground Zero Mosque." It's nothing of the kind. (For Keith Olbermann's powerful response to this vicious slander, click here.)  (VN: Its actually a refurbishing and expansion of an existing community center that has been there for a very long time.  So who is stirring up the evangelical Christians???  Or should I say Christian Zionists, yeah, that is what I should say since its the truth). 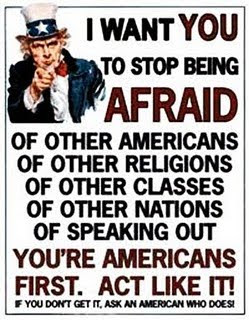 The Colbert Report successfully uses humor to ridicule the mentality of anti-Muslim bigotry, Colbert also draws attention to how many acts of hatred have occurred in recent months. (Click here.)

Bigoted distortions about Muslims, here, [Adapted from Dr. Peter Hammond's book Slavery, Terrorism and Islam: The Historical Roots and Contemporary] are designed to convince people that Muslims are innately dangerous. Specifically, people are supposed to fear for their lives if Muslims are "allowed" to increase as a percentage of the population. If the implications of all this is true, then there should be a direct correlation between murder rates and the percentage of Muslims found in a given population.

To test this assumption, I took the percentages given in the article making the accusations about Muslims and compared them to the "deliberate homicide" rate for the countries mentioned in the article. Considering the way some people thoughtlessly equate Islam with terrorism, let's suppose we're supposed to be fearful of getting murdered. Taking this person's figures at face value, I compared them to actual murder rates from Wikipedia and Nationmaster.com. I recorded the murder rates for all but the few countries not mentioned in those two sites. 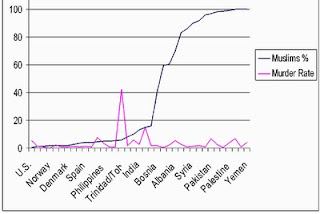 If you compare the bar graph below with the one below it, you'll see a difference between the third bars. That's because the unusually high murder rate in the island nation of Trinidad and Tobago was what is called an outlier. You'll see the same uncharacteristic jump in the line graph above. In the second bar graph, I removed the outlier for a more reliable comparison. 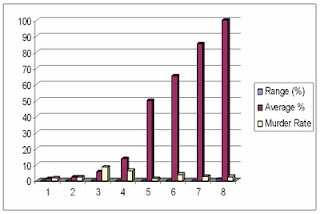 Below,you see the same bar graph with the outlier (Trinidad and Tobago) removed. 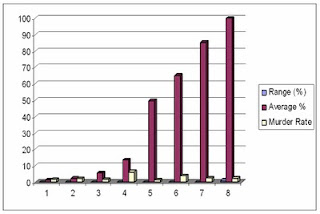 When you read the anti-Muslim email messages, they seem "reasonable." On closer examination, though, you'll find that they're not giving facts; they're giving general impressions. They serve only to create a sense of unease that may further be fed until it becomes hysteria. 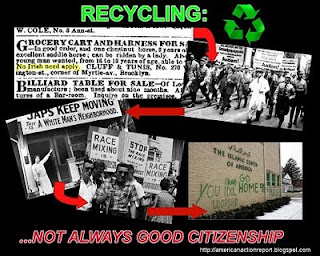 H. L. Menckin once wrote something like, "History has proven that people don't learn from history." Please, in this generation, don't let it be true.


The article is reproduced in accordance with Section 107 of title 17 of the Copyright Law of the United States relating to fair-use and is for the purposes of criticism, comment, news reporting, teaching, scholarship, and research.
Posted by Vatic at 6:04 AM

Selective interpretation. One would hope that a less biased response would be used to counter a few examples where some people are concerned about what proponents of Islam preach. Your argument at Vatic is self-serving.

Yup, that is what is neat about a free country, at least for a little while yet. You get to have your own opinion. I didnt write this, but I am certain, he did not make up the facts and if the facts are accurate, I would agree with the conclusions you believe are erroneous.

Each of us can read it and determine for ourselves if we believe the article based on evidence presented or simply listen to an uninformed opinion with no evidence as to the erroneous information you say it contains.

Show us, prove proof and I am certain some will agree with you, but I bet if you don't provide evidence as he has of your position as being hte correct one, then it will be a no brainer.