Vatic Note: Well, during the Gulf of Mexico fiasco, Vatic Project put up an article about the floor of the sea in Australia had risen I believe it was 11 or 13 ft and that was several months ago. Now this happens and add to this all the earthquakes going on globally, all the volcanic eruptions, and the incredible number of sink holes globally, its beginning to look a lot like some cosmic force is affecting our planet. About a year or so ago we also commented during the global warming debate that whatever was melting the arctic was also affecting the other planets in the solar system so the solution could not be addressed only to our planet. Its another theory that this is the beginning of the approach of Nibiru or Planet X, which is the twin planet to the sun. We put up a huge blog on that one chock full of info that we recommend you visit again and see if any of this fits in.

The earthquake that devastated a city in New Zealand tore open a new 11ft faultine in the Earth’s surface.

The 7.1-magnitude quake which hit Christchurch, the country’s second-largest city, destroyed about 500 buildings and caused an estimated £930million of damage.

But hundreds of lives were saved by tough building rules, it was claimed. Only two injuries were reported.
The quake was caused by the continuing collision between the Pacific and Australian tectonic plates, said Professor Mark Quigley, of Canterbury University. 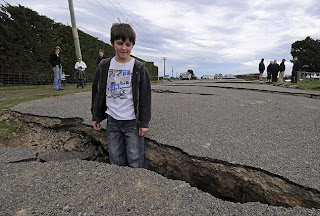 ‘One side of the Earth has lurched to the right ... up to 11ft and in some places been thrust up,’ he said. ‘We went and saw two houses that were completely snapped in half by the earthquake.’

The quake cut power across the region, roads were blocked by debris and gas and water supplies were disrupted.

Christchurch mayor Bob Parker said power was back to 90 per cent of the city and water. Portable toilets had been provided and tanks of fresh water placed around the city. Mr Parker said it would take a long time to fix fully some core services such as water and sewerage. ‘Our first priority is just people,’ he said. ‘That’s our worry.’

The fact that no one was killed was put down to the timing of the quake and strict building codes.
New Zealand has very good building codes which mean the buildings are strong compared with, say, Haiti,’ said Professor Martha Savage of Victoria University in the capital Wellington.

‘It’s about the same size quake as Haiti, but the damage is so much less. Though chimneys and some older facades came down, the structures are well built.’ 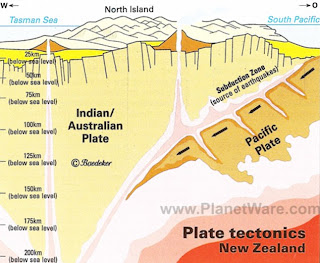 Prime Minister John Key said it was a miracle no one was killed. He put that down to the building codes and because the quake happened just before dawn on Saturday.

‘If this had happened five hours earlier or five hours later there would have been absolute carnage in terms of human life,’ he said. Parts of the city look like they’ve been put in the tumble dryer.’

Up to 90 extra police officers had flown in to Christchurch to help and troops were likely to join the recovery effort today. Engineering teams have begun assessing damage to all central areas.

SEDITION SUCH AS the only solution for amerikkka is a revolution?

"Definition of SEDITION
: incitement of resistance to or insurrection against lawful authority"

We can prove in a court of law that lawful authority based on the constitution does not exist. So for now while the Israeli citizens occupy our whitehouse and defence and intel dept along with state, we can not call it sedition, you call it revolution against a foreign occupying country.

Yeah...I live in Christchurch. We had an aftershocks from that quake on the 22nd of February, and last I heard, the death toll was 113. It was a 6.3, but sat at only 5km below the surface, which meant it was more devastating.

Rik, thank you for that update. new one on NZ as an update going up at 2 am our time in the mountains. lol