Vatic Note: We thank Gerry for providing us with this weekly insight on Taiwan and its politics, history, and problems. His analysis and knowledge has helped to give us perspective from both an asian geopolitical perspective, but also from a historical perspective and really give us insight into "WHO" are these people who seem to be so important to world leaders with respect to location and culture. This kind of knowledge allows us to understand our allies and our enemies. Hopefully such work will convert enemies into allies as "people" regardless of what the respective governments decide, since there are more people than government controllers. We must begin such work toward undermining the satanists and their agenda and so far, its been great and I can see nothing but good coming from all of it. Anyone else who feels we can benefit from their perspective on their country in the geopolitical scheme of things are welcome to make such a contribution. Thanks again and enjoy the read. PLEASE NOTE:   the beginning of the confiscation of land by the government, just like what is happening here in the US.   Its global.

(I had intended to write this as one article and be done with it; however, Taiwanese have been betrayed so often, so continuously, and in so many ways, by their leaders, that one article isn’t possible. I’ll try to limit this article to some of the ways Taiwan’s leaders are betraying Taiwanese who depend on Taiwan’s wetlands. Over the next few months, I hope to cover areas of law, justice, human rights, international agreements, labor rights, and the rights of Taiwan’s aborigines, although not necessarily in that order.)

I’ve lived in Taiwan for almost two decades, and I’ve had many opportunities to read the words and see the actions of this nation’s ruling elite. I’ve also seen the results of opinion surveys reflecting thoughts and feelings.

Some 2% of Taiwan’s population is aboriginal—Austronesian people who came to Taiwan 14,000 years ago and spread all over the Pacific. The first people of Sino-Japanese to come to Taiwan arrived roughly 350 years ago and settled along the western coast. They were Hokkien (a.k.a. Hoklo) and now comprise 70% of Taiwan’s population. The Hakkas, of uncertain origin, though certainly of Sino-Japanese stock, came later.

During the late 1940’s and early 1950’s, as Chiang Kai-shek was driven from China, a fourth group, Waishengren (informally called “mainlanders”) arrived. As early as 1947, they established martial law, killed as many as 30,000 Taiwanese (who initially had welcomed them,) and stole so much property that their Chinese Nationalist Party (the KMT) became the richest political party in the world as well as the only political party in Taiwan.

Two generations have passed. The Waishengren now comprise 14% of the people in Taiwan. According to opinion surveys, most of them—especially young people—consider themselves Taiwanese and are loyal to Taiwan; and most of Waishengren opine that Taiwanese and Chinese are separate peoples.

The betrayers of Taiwan are basically the same two kinds of people who betrayed the American South during the so-called Reconstruction of 1865-1877. Specifically, they are the carpetbaggers who still see themselves as rightful rulers of a conquered land; and scalawags—native Taiwanese who appear to have thrown in their lot with the ruling elite.

Public opinion polls and personal experiences aren’t my only sources of information indicating elitist attitudes of these carpetbaggers. Especially revealing is the saga of Kuo Kuan-ying, who was the information division director of Taiwan’s representative office in Toronto. In effect, his job was to make Taiwan look good in the eyes of Canadians. Secretly, he wrote many articles calling Taiwanese Tai-ba-dz (Taiwanese rednecks), Tai-ke (Taiwanese hicks), and wo-ko (Japanese pirates.) He further expressed the view that Chinese had both the right and the duty to rule Taiwan because they couldn’t rule themselves.

When his offensive writings became known to the Taiwanese public, there was such an outcry that Kuo was removed from his responsibilities of making Taiwanese look good to Canadians. Astonishingly, many Waishengren argued that Kuo was simply exercising his freedom of speech and shouldn’t have been removed.

I apologize for the necessarily lengthy introduction. Now let’s get to the people of the wetlands. 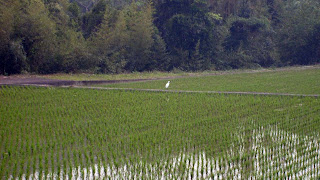 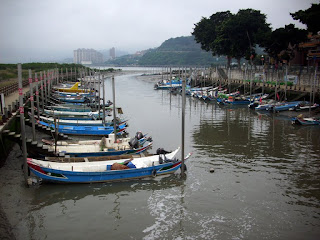 For hundreds of years, Taiwanese have made a living from the wetlands. Many Taiwanese are freshwater fishermen. Many others are rice farmers, or farmers of other crops that require flooded terrain. They depend on terrain that will partially flood and stay wet enough to support rice crops.

Beyond the estuaries, many others take their small boats out to sea; they depend on the relative cleanliness of the water flowing from Taiwan’s rivers. Along the seacoasts at low tide, countless women flock to the shore to gather various mollusks such as surf clams, crustaceans such as crabs, and various edible plants. (I usually see many more than the one woman you see at right.) These gifts from the sea are edible for only as long as they’re uncontaminated by chemical pollutants. 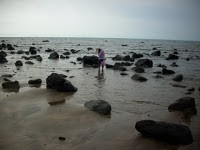 Some 15 to 20 years ago, Taipei County undertook the massive project of restoring the county’s damaged wetlands, and they even created man-made wetlands to add to them. Danshui River’s water is now much cleaner than it was before. 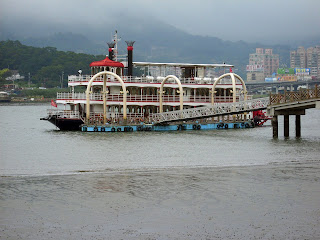 Bicycle paths extend from the Nangang District at the eastern end of Taipei all the way to Fisherman’s Wharf, beyond Danshui. The ferry boat, which had fallen into disuse after the Guandu Bridge was built, has been revived to take paying visitors on tours of the now beautiful Danshui River. Danshui, once a decaying fishing village, is now a major tourist attraction.

All these benefits I’ve just described, from the traditional to the modern, represent a strategic fit among people, planet, and profits. As you can see from some of the pictures (see links,) it’s also a strategic fit for such wildlife as little egrets, intermediate egrets, cattle egrets, black-crowned night herons, oriental ibises, gray herons, and myriad other wildlife.

Ironically, agrarian peoples throughout the world and throughout history have had the good sense to strive for just such a strategic fit as this. Only in the past twelve years has the idea been presented to us as a new model for business social responsibility. (See “Reclaiming our Agrarian Heritage and "A Search for Universal Values.”)

It’s risible for anyone to look at this centuries-old partnership between man and nature, augmented by modern ideas, and say that the land is undeveloped or that it needs to be developed to provide jobs to boost the economy. Only the arrogance of elitism would cause someone not to realize that fishing, farming, and harvesting of mollusks are, in fact, jobs and that they do, in fact, contribute to the economy.

These occupations don’t add much to the nation’s GDP, but economists today place less stock in those figures than they did only a few years ago. The GDP measures money spent, but it doesn’t measure value received. Consider as well that the growing of grain contributes less to the GDP than the processing of cereal products; but it’s the growing of grain that makes all the successive links of the value chain possible. 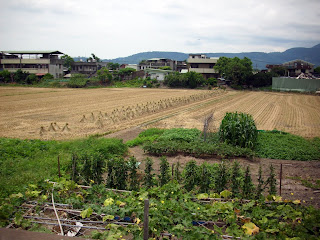 Early this summer, Premier Wu Den-yeh ordered the confiscation of farms belonging to 24 families in Miaoli County. The purpose of the seizure was to allow the expansion of a “science park.” No, that’s not an educational facility. It’s a catchall term for an area that’s may be used by such businesses as chemical plants, electronics manufacturers, or others claiming an interest in science.  (VN:  seems this must be a global effort as we have experienced here, the confiscation of land without compensation for business expansion instead of public use for eminent domain.  We now have that in common.)

The farmers had more use for the land than for the money. Land is always there, but what can a farmer do when money runs out and he has no land? Although the farmers refused to sell, Premier Wu proudly announced that the payment was in a special account from which the farm families could draw at any time. Tough luck, farmer.

The farmers formed a delegation to speak with President Ma Ying-jeou. They made sure to tell him that their rice crops were less than a month away from being harvested. Ma uncharacteristically received them and told them he’d have an answer for them in less than two weeks. In less than two weeks, men with backhoes appeared on the farmers’ lands and destroyed their rice fields.

Nationwide, Taiwanese protested the wanton seizure of the land and the destruction of the rice harvest. Premier Wu backed down—sort of—and announced that the farm families would be given land suitable for farming. Of course it wouldn’t be the lands that had been in their families for generations, but that’s tough luck, farmer. Wu also used the excuse that he hadn’t known that farmers were living there.

As appalling as this story sounds, it’s one of many taking place in Taiwan even as I write these words. Farmers in Hsinchu, Miaoli, and Changhua Counties are fighting to save their lands. One blogger seemed to suggest that the science parks didn’t really need all the land that was being seized in their names. (Click here.)

He wrote, “[T]he fact is that most existed science industrial parks are not used. More than 247 hectares in Tungluo Park of the Hsinchu Science Park alone have not been developed at all, with only 4 hectares being genuinely put to use!”

Then there’s the pollution problem, especially in Central Taiwan. The Indo-Pacific humpback dolphin, an endangered species inhabits that area. Premier Wu assures us that “dolphins are a kind of fish;” and, since they have the good sense not to bump into the sides of pools in a seaquarium, they should have no trouble avoiding polluted waters. (Click here.)

Here’s another groaner for you: In the same article, Wu was quoted as saying, “If Taiwan preserved all its wetlands, would it be able to develop the economy or create employment opportunities? You cannot just look at one part of the picture.”

Excuse me, but what is farming if it’s not a job? What about fishing, and coastal harvesting of mollusks and other coastal sea life? What about tourism? Doesn’t their employment count for something?

No, to Premier Wu, if he has bothered to think about it, farming, tourism, harvesting, water purity, wildlife, and all the other people who depend on the wetlands are just “part of the picture.” Major polluters who have money to contribute to political campaigns are, perhaps, the big picture.

Sun Yat-sen, the founder of the Republic of China espoused the Three Principles of the People: Nationalism, Democracy (the will of the people), and Livelihood, which came from Abraham Lincoln’s quote, “a government of the people, by the people, for the people.” Somehow, I didn’t see the phrase, “in spite of the people.” How would Premier Wu Den-yeh explain his position to Dr. Sun or Mr. Lincoln?

Posted by American Action Report at 1:04 AM
The article is reproduced in accordance with Section 107 of title 17 of the Copyright Law of the United States relating to fair-use and is for the purposes of criticism, comment, news reporting, teaching, scholarship, and research.
Posted by Vatic at 2:00 AM