The Fall of the WTC1 Spire and the Intact WTC1 Stairwell

The Fall of the WTC1 Spire and the Intact WTC1 Stairwell: Proof of Demolition Near Bottom of the Tower

After the destruction of WTC1, this stairwell in the core of the building remained-- three to four stories higher than the rest of the rubble pile: 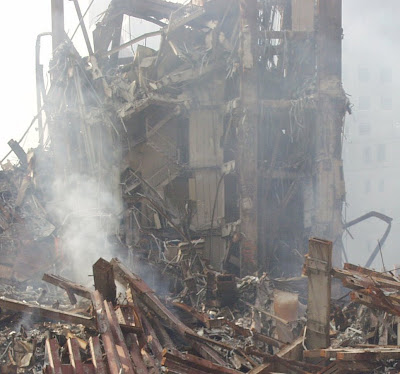 Now remember the "spire" of WTC1 that remained for a few seconds during the destruction of the tower? 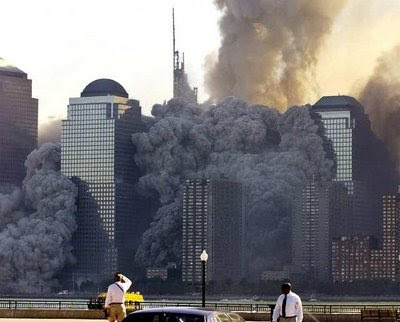 It was a good 70 stories high, and was part of the WTC1 core: 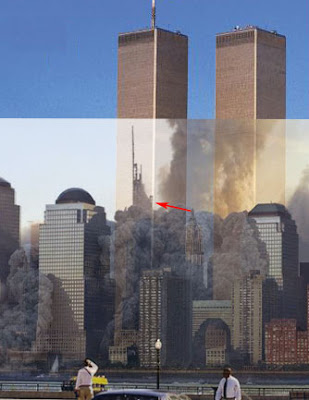 The spire didn't topple over, but fell more-or-less STRAIGHT DOWN:

IF THE SPIRE MERELY COLLAPSED, FALLING STRAIGHT DOWN, THE HEAVY CORE COLUMNS SHOULD HAVE OBLITERATED THE STAIRWELL AT THE BASE OF THE CORE!
Rather-- the stairwell WOULD survive if the spire was blown with bombs at the base-- a few stories above the stairwell. In this way, the higher spire columns could fall to the side as the base was blasted out. Perhaps several bombs along the base of the core were used to create this result. But it seems clear that a collapse of the spire could not result in this intact stairwell. It also seems likely that this nuclear blasting along the core/spire would account for all the missing WTC1 core columns!

Get "The Nuclear Destruction of the World Trade Center and The China Syndrome Aftermath" and "Quarantine: Mankind Held Hostage: The Ultimate Truth of Hiroshima, 9/11 & Man’s History" from the Anonymous Physicist at http://www.anonymousphysicist.com/.


The article is reproduced in accordance with Section 107 of title 17 of the Copyright Law of the United States relating to fair-use and is for the purposes of criticism, comment, news reporting, teaching, scholarship, and research.
Posted by M. C. Bruecke at 1:10 AM

Email ThisBlogThis!Share to TwitterShare to FacebookShare to Pinterest
Labels: 9/11, zs_911_what