Vatic Note:   Just a reminder of what it will be like living under a global fascist state run by unelected corporations.   As the article shows, its the british commonwealth states along with America, now considered a returning member of that group, that are now all legal in selling such frankenfood here. This has happened since we have moved more and more into agricorps and have been literally destroying the family farmer in the process. Somehow we have to go back to supporting family farmers, get away from all processed foods, and buy directly from the local small family farm to stop this craziness. The reason this has worked in the past is because no one in the states is enforcing the Sherman Anti-trust act that prohibits the collusion we are seeing and forces competition to give consumers choices. No one is enforcing anything anymore, crimes are being committed in this country by the fascists and nothing is being done about it. Guess who owns the agricorps. You guessed it. None other than the international Rothschild bankers garnering monopolies over every aspect of our lives that touch on our survival needs. Wonder if there is some creative way to respond in kind? Ya think? WAIT TIL YOU SEE THE VIDEO.  Amazing what we are allowing our elected reps to get away with all for all those campaign contributions.  This batch of elected reps come cheap don't they?  There was a time when our elect officials had integrity and the price was too high to pay for their votes, but no more.  Both parties too.

Industry-Wide Use of Meat Glue Sticks Together Scraps of Meat To Sell You Prime Cuts
http://healthfreedoms.org/2011/03/29/industry-wide-use-of-meat-glue-sticks-together-scraps-of-meat-to-sell-you-prime-cuts/
Submitted by Lois Rain on March 29, 2011, submitted to Vatic Project by Boldarn, Australia 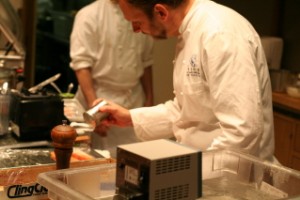 Did you know your meats contain this meat glue? Just one more way food producers can sell more, while lowering the quality of what you consume. If it’s so harmless and miraculous, why didn’t we know before? It’s not on labels because technically it not part of formulation of the product. That’s a giant stretch. It is not harmless…and yes, you are actually ingesting it all the time!

It creates a type of franken-meat in that it allows butchers to use the undetectable glue to piece together scraps of meat into a seamless full meat cut. England banned use of Thrombin coagulant last year. They found it mislead consumers to think they are getting a prime cut for their money, and also the original glue was made from cow and pig blood, something they didn’t think was wise in restaurant meats.

When multiple pieces are globbed together, bacteria has a better chance of growth. “If there is a bacteria outbreak, it’s much harder to figure out the source when chunks of meat from multiple cows were combined,” said Keith Warriner who teaches food science at University of Guelph.

The EU recently brought back the use of the new glue, Thrombian, or Transglutaminase, right along with Australia, Canada and the US. The FDA, of course, deems it GRAS (generally recognized as safe). The meat preparers in the video below need to wear masks when using it because, “It’s dangerous s—.”

It’s hush-hush because meat preparers are afraid to lose their suppliers and customers. I thought that organic and natural meat places would not use the glue but the “all natural” company in the video uses it shamelessly. The next time you buy organic meat, it would hurt to ask about its use. ~Health Freedoms

Meat Glue: It sounds utterly repellent; like some pre-industrial, rustic adhesive, but it’s actually a fine, tasteless powder that looks like icing sugar and is it makes meat and other proteins stick together like super glue. If your eating meat, chances are you’re eating or have eaten the glue at some point.


This sort of thing has been a boon to the food industry, which can now treat all sorts of proteins like meat or fish as just another material to be processed, but in the hands of molecular gastronomists it’s become a way to manipulate food in a way that would have been previously impossible. It’s possible, for example, to make tenderloin rolls wrapped in bacon that hold together perfectly without the need for twine or toothpicks. So what kind of glue is it exactly?

Produced as Activa by Japan’s Ajinomoto Company, it’s scientific name is “transglutaminase” and it belongs to the family of clotting enzymes which are eight in number.

Thrombin is a coagulation protein which together with the fibrous protein fibrin can be used to develop a “meat glue” enzyme that can be used for sticking together different pieces of meat. It can be made from blood taken from either cows or pigs.

Less than a year ago, the European Parliament had voted to ban bovine and porcine thrombin. The House said the meat glue has no proven benefit for consumers and might mislead them instead. 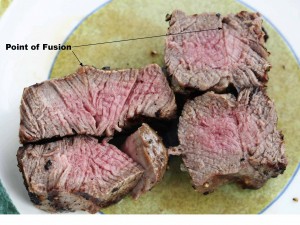 The Parliament estimated that there is “a clear risk that meat containing thrombin would find its way into meat products served in restaurants or other public establishments serving food, given the higher prices that can be obtained for pieces of meat served as a single meat product”.

But two weeks ago, all but one of the European Union nations voted in favor of using Thrombian, or Transglutaminase (TG). They now join other developed nations such as the U.S., Canada, and Australia who approved the product.

The Swedish government’s recent approval of the use of Thrombian prompted the Swedish Consumers’ Association and politicians to join together to criticize this approval. “We do not want this at all–it is meat make-up,” Jan Bertoft of the Association told IceNews, a daily Icelandic newspaper.

“The problem is that Thrombian-enhanced products look like real meat. It is the dishonesty in it that makes us think that it is not okay,” said Bertoft. For example, pork tenderloin can have numerous small parts fused together to produce what will appear to be a full fillet.

According to the Food and Drug Administration’s website, Transglutaminase is classified as a GRAS product (generally recognized as safe).

Health Canada approved the product. However, the glue also raises food-safety issues, says Keith Warriner, an associate professor of food science at the University of Guelph, in a phone interview from his office. If there is a bacteria outbreak, it’s much harder to figure out the source when chunks of meat from multiple cows were combined.

Yet another innovation is “modified atmosphere packaging”, the widespread practice of filling meat packaging with adjusted levels of oxygen and other gases. The gases can keep meat from losing its fresh-looking red hue. Shiv Chopra, an Ottawa food-safety expert and retired Health Canada scientist, said in an e-mail that the technique is “dangerous” because it may prevent shoppers from seeing when meat has gone bad. UBC’s Allen agreed: “This can be misleading to consumers.”

Invariably, industry justifies use of these so called meat glues because they are used only during processing and resist declaring it in the label obviously maintaining that it is not a part of the formulation of the product. While technically they are correct, the fact still remains that the so called processing aid stays right there in the final product.which certainly requires declaration for the information of the consumer.

If the idea of fish slurry or chicken puree glued together with an enzyme isn’t appealing to you, use it as motivation to learn more about where your food comes from. Try shopping from farmer’s markets more, so that you know who has grown your vegetables, or raised your meat if you eat it. Although between the chemicals, pollutants, cruelty and maybe reconsider what it means to eat meat at all.

Bad stuff indeed, especially if the powder is breathed in. However, a couple of points are misleading. The use of meat glue (which has been around for over a half-century) must be labeled as such in the U.S. Also it is not called Activa. Activa is either short for Activated Charcoal or is a name for a variety of Brand-Name yogurt.