Vatic Note:  This was an issue about this man handing out flyers and pamphlets to potential Jurists who were coming in to be considered for jury duty.  He was informing them of their right to nullify unjust laws.  He was informing them of all the various powers the jury has, and he was arrested and brought before the judge from what I can surmise,  and the judge told him he could not hand them out and would consider it "jury tampering" which is a serious crime.  This is what happened.   See what we can do when we believe in something??? 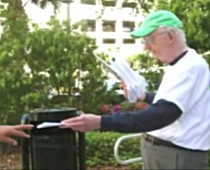 Julian Heicklen can't get arrested on day two while the cameras are following him.
Photo: Orlando Sentinel

Jury rights report from the liberterrain…


For a second day libertarian activist Julian Heicklen flaunted Judge Belvin Perry's order that anyone passing out jury information around "his" courthouse in Florida's Orange County will be held in contempt of court for jury tampering.

And for a second day nothing happened.   Or almost nothing. Deputies handed him a copy of the Judge's order Monday morning but didn't return when Heicklen resumed his one-man act of civil disobedience in the afternoon.

After failing in his mission to get arrested for defying Judge Perry's order on Friday Heicklen returned to the courthouse in Orlando Monday for a repeat performance.

At one point, reports the Orlando Sentinel, Heicklen handed a jury rights pamphlet to a man wearing a juror's badge while an Orange County deputy stood just a few feet away.

Wrote Anthony Colarossi, the Sentinel reporter who has been closely following the story, "That act seemed to be a clear violation of Perry's order committed right in front of one of the officials responsible for enforcing the dictate, but nothing was done to stop Heicklen's obvious defiance. And for that reason Heicklen proudly claimed a victory."

"I was the jury for the judge, and I've nullified his order," Heicklen said.

Comment for another article but I couldn't find it...
You were correct!
"Nuclear Material will decay into CHEMTRAILS! into elements BARIUM and STRONTIUM!"

I will try to find it for you and put this up over there when I do find it. Wish me luck. and thanks for the video.

Oh, you are a genius. This is a great rabbit hole.