“We know what has been released. The genuinely sensitive material held by Wikileaks, that tying Israel to actions against America in Iraq, tying Israel to the drug trade in Afghanistan and tying Israel to terrorism in Pakistan, have yet to be seen. Will Assange be releasing these reports in 6 months? Why wait that long?” 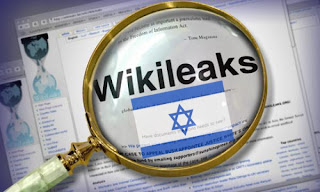 The Bedouins look at each other and smile.

“We just saw two, no ten Iranians swimming the Euphrates River. It looked like they had guns, no I think it was bombs, no, a big bomb, a dirty bomb I think I heard them say. They kept saying they were meeting their friends from Pakistan, no, I think it was Al Qaeda, no, now that I think of it, it was Al Qaeda from Pakistan, maybe bin Laden himself, yeah, that’s the ticket. They were taking nuclear weapons and meeting Usama bin Laden.”

The corporal, listening intently with a touch of skepticism looks the taller of the two in the eye and asks, “Where, exactly were they carrying these bombs again?”

The two Bedouins look at each other again, a smile spreads across their faces as they turn to the young soldier, “They had the bombs in their underwear, of course, where to you think terrorists keep such things?”

Another Wikileak is born…….
——————————————-
Julian Assange has lashed out at the independent press for their attacks on the credibility of Wikileaks, particularly after revelations of his associations with, not only the New York Times and the powerful Murdoch media empire, both strong voices for Israel’s Zionist movement, but the Rothschilds family and even, strange as it may seem, billionaire George Soros.

While the mainstream media, now openly admitting their partnership with Wikileaks, has built Assange to “rock star” status, their reporting has systematically censored attacks on Wikileaks by, not only alternative media but governments as well.

Assange’s recent rages at the independent media are a clear indication of the declining status of mainstream press and television as reliable new sources. With 4 out of 5 seeking their news from the Internet and those looking for something other than sports, fashion and gossip, more likely than not moving increasingly toward the alternative press, Wikileaks, now practically a “brand name” for the New York Times and Fox/Murdoch group, is beginning to look, more and more, like a liability.

These attacks on Assange, citing his seeming pro-Israel bias, one he now openly admits also, soon began coming in from governments, Pakistan and Turkey, major allies of the United States, among others. However, the press never reported them or any of the other accusations of bias. While busily reporting on Assange’s sex life, a version now contradicted as to nature and preferences, the media left out the real heart of the Wikileaks controversy itself, its own role in Wikileaks.

If anything, the New York Times is guilty, not so much of espionage as reported by CBS News, but for misrepresenting their role in Wikileaks.

FILTERING THE UNFILTERED, THE PROPAGANDIZING OF WIKILEAKS

When Assange admitted that materials damaging to Israel were allowed to be removed from Wikileaks by outsiders, The New York Times and unnamed others, he failed to clarify the process used for adding material to Wikileaks. This process is called “seeding.”

When Brzezinski accused Assange of “seeding” Wikileaks with “pointed material” on behalf of an “intelligence agency,” this is the process he was referring to. It isn’t just that Wikileaks protects Israel but that material damaging to Israel’s enemies is now proven to have been chosen specifically.

This won’t be said enough times. When material was added and taken away to serve the purpose of powerful outside groups, in this case, all with powerful Israeli ties, it made Wikileaks an agent of censorship, an agent of propaganda and totally discredited the Wikileaks project.

Dr. Alan Sabrosky cites the following after his analysis of Wikileak material;

“The one striking exception in all of this global tour de farce
Posted by Vatic Master at 10:00 AM