Mr. Kissinger, Have you No Shame?

Vatic Note:  This article needs no commentary from me, however, I do want to make one very important clarification before we go down this rabbit hole, since its a deep one.  Kissinger is not Jewish, he is a Khazar and that is why he had no problem saying what he said.   The khazars are a mix of mongolian and huns and they were chased out of mongolia and into eastern Europe near Russia, to a country called Khazaria (which is now Georgia and other small countries nearby) and that was back in the early first century.   I believe they were referenced in the Bible as the Synogogue of Satan in the New Testament in reference to their pretending to be Jewish.  The Khazars hate Christians, muslims and Semitic Jews and have said so publically printed in various newspapers and done so over time.  I felt this article needed to have that clarification made up front.  They were assassins in their day and used by many countries to perform that function.  Now, on with the article.  Its very good, one of the best in depth and accuracy I have read in a long time on this subject.

Mr. Kissinger, Have you No Shame?

http://beforeitsnews.com/story/329/604/Mr._Kissinger,_Have_You_No_Shame.html
Before Its News, by ActivistPost
Source ; By Christopher HitchensPosted Monday, Dec. 27, 2010,

Ignore the recent excuses. Henry Kissinger's entire career was a series of massacres and outrages. 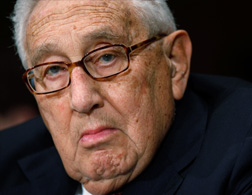 Until the most recent release of the Nixon/Kissinger tapes, what were the permitted justifications for saying in advance that the slaughter of Jews in gas chambers by a hostile foreign dictatorship would not be "an American concern"? Let's agree that we do not know. It didn't seem all that probable that the question would come up. Or, at least, not all that likely that the statement would turn out to have been made, and calmly received, in the Oval Office.

I was present at Madison Square Garden in 1985 when Louis Farrakhan warned the Jews to remember that "when [God] puts you in the ovens, you're there forever," but condemnation was swift and universal, and, in any case, Farrakhan's tenure in the demented fringe was already a given.

Now, however, it seems we do know the excuses and the rationalizations. Here's one, from David Harris of the American Jewish Committee: "Perhaps Kissinger felt that, as a Jew, he had to go the extra mile to prove to the president that there was no question of where his loyalties lay." And here's another, from Abraham Foxman of the Anti-Defamation League: "The anti-Jewish prejudice which permeated the Nixon presidency and White House undoubtedly created an environment of intimidation for those who did not share the president's bigotry. Dr. Kissinger was clearly not immune to that intimidation." Want more?

Under the heading, "A Defense of Kissinger, From Prominent Jews," Mortimer Zuckerman, Kenneth Bialkin, and James Tisch wrote to the New York Times to say that "Mr. Kissinger consistently played a constructive role vis-à-vis Israel both as national security adviser and secretary of state, especially when the United States extended dramatic assistance to Israel during the 1973 Yom Kippur War."

They asked that "the fuller Kissinger record should be remembered" and, for good measure, that "the critics of Mr. Kissinger should remember the context of his entire life." Finally, Kissinger himself has favored us with the following: At that time in 1973, he reminds us, the Nixon administration was being pressed by Sens. Jacob Javits and Henry Jackson to link Soviet trade privileges to emigration rights for Russian Jews. "The conversation at issue arose not as a policy statement by me but in response to a request by the president that I should appeal to Sens. Javits and Jackson and explain why we thought their approach unwise."

But Kissinger didn't say something cold and Metternichian to the effect that Jewish interest should come second to détente. He deliberately said gas chambers! If we are going to lower our whole standard of condemnation for such talk (and it seems that we have somehow agreed to do so), then it cannot and must not be in response to contemptible pseudo-reasonings like these.

Let us take the statements in order. Harris and Foxman at least assume what we know for many other reasons to be true: Richard Nixon was a psychopathic anti-Semite. Is Kissinger so base as to accept their defense—that he was cringing before a Jew-baiter? Surely this, too, is "hurtful" to him (the revealing term he employs for reading criticism of his words rather than for their utterance)? He declines even to discuss the subject, though it has come up on countless previous Nixon tapes. The difference on this occasion is stark: The other recordings have Nixon giving vent to his dirty obsession while Kissinger makes fawning responses. This time, it is Kissinger who goes as far as any pick-nose anti-Semite can go. And Nixon doesn't bother to grunt his approval. Not even he demanded so much of his eager toady.

Of the Zuckerman-Bialkin-Tisch school of realpolitik, nothing much needs to be said. They refer to the "shock and dismay of some in the Jewish community"—as if only that community was entitled to shock or dismay—while quite omitting even the usual formality of expressing any disapproval of their own. To them, pre-approval of genocide, offered freely to a racist crook, is forgivable if the speaker is otherwise more or less uncritically pro-Israel. Add to this the other excuses of Jewish officialdom—that the pre-approval is also excusable when used to appease the evil mood swings of a criminal president—and you have the thesaurus of apologetics more or less complete. Kissinger's own defense—that pre-approval of gas chambers was his thinking-aloud dress rehearsal for an "appeal to Sens. Javits and Jackson"—is of course unique to him.

So our culture has once again suffered a degradation by the need to explain away the career of this disgusting individual. And what if we did, indeed, accept the invitation to "remember the context of his entire life"? Here's what we would find: the secret and illegal bombing of Indochina, explicitly timed and prolonged to suit the career prospects of Nixon and Kissinger. The pair's open support for the Pakistani army's 1971 genocide in Bangladesh, of the architect of which, Gen. Yahya Khan, Kissinger was able to say: "Yahya hasn't had so much fun since the last Hindu massacre."

Kissinger's long and warm personal relationship with the managers of other human abattoirs in Chile and Argentina, as well as his role in bringing them to power by the covert use of violence. The support and permission for the mass murder in East Timor, again personally guaranteed by Kissinger to his Indonesian clients. His public endorsement of the Chinese Communist Party's sanguinary decision to clear Tiananmen Square in 1989. His advice to President Gerald Ford to refuse Alexander Solzhenitsyn an invitation to the White House (another favor, as with spitting on Soviet Jewry, to his friend Leonid Brezhnev).

His decision to allow Saddam Hussein to slaughter the Kurds after promising them American support. His backing for a fascist coup in Cyprus in 1974 and then his defense of the brutal Turkish invasion of the island. His advice to the Israelis, at the beginning of the first intifada, to throw the press out of the West Bank and go for all-out repression. His view that ethnic cleansing in former Yugoslavia was something about which nothing could be done. Forget the criminal aspect here (or forget it if you can). All those policies were also political and diplomatic disasters.

We possess a remarkably complete record of all this, in and out of office, most of it based solidly on U.S. government documents. (The gloating over Bangladesh comes from July 19, 1971.) And it's horribly interesting to note how often the cables and minutes show him displaying a definite relish for the business of murder and dictatorship, a heavy and nasty jokiness (foreign policy is not "a missionary activity") that was by no means always directed, bad as that would have been, at gratifying his diseased and disordered boss.

Every time American career diplomats in the field became sickened at the policy, which was not seldom, Kissinger was there to shower them with contempt or to have them silenced. The gas-chamber counselor is consistent with every other version of him that we have.

To permit this gross new revelation to fade, or be forgiven, would be to devalue our most essential standard of what constitutes the unpardonable. And for what? For the reputation of a man who turns out to be not even a Holocaust denier but a Holocaust affirmer. There has to be a moral limit, and either this has to be it or we must cease pretending to ourselves that we observe one.

Christopher Hitchens is a columnist for Vanity Fair and the Roger S. Mertz media fellow at the Hoover Institution. His books include The Trial of Henry Kissinger.

You have given your body for this point of view. With deep respect and Love, Light and Peace always be with you.

For those NOT of the "Light" it is time to Leave. We will create the Reality we wish to Live In, of that you can be sure.

Wow, Rob, what a great comment. Can you tell us more about "giving his body" for this point of view??? What happened? Was the author killed or is he deceased??? I don't recognize the authors name, so maybe you can help us out here.

it was a curious comment and I am very intrigued by it.