Vatic Note:   I can sum up my vatic note in just one question ...... does anyone see any blood splattering, or any on the ground or on the bodies of those supposedly being killed?   So who is paying those laying in the makeshift ditch?  In answering those questions, one must realize there is no need for a vatic note at this point.   So read below and see if you agree with the title or not. You already know what my opinion of Pete Santilli is, so there is nothing more for me to say.  Have a great evening and day tomorrow. 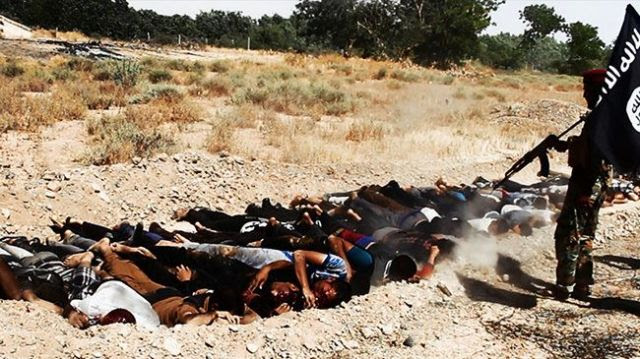 An Iranian military official says the United States has created the ISIL Takfiri terrorist group in line with its plots to sow discord in the Middle East.

Commander of Iran’s Basij volunteer force Mohammad Reza Naqdi said on Saturday, “The White House is the headquarters of the ISIL.”
Washington itself created the “cancerous tumor and devious current” of ISIL in the region, the Iranian official said.

“The first objective of the United States in creating this criminal current is to portray a distorted image of Islam and this has been achieved through the perpetration of inhumane and savage crimes and their publication by the world media,” he said.

“The second objective is to create rift, animosity and war between the Shia and Sunni,” the Iranian commander pointed out.
Naqdi called on all Muslims to maintain their unity and avoid issues that fuel religious conflicts.

On Friday, US President Barack Obama said that the United States is assembling an international coalition with the goal to “snuff out” the ISIL terrorist group, adding that such extremist groups have “no place in the 21st century.”

Ministers from the United States, the United Kingdom, France, Germany, Canada, Australia, Turkey, Italy, Poland and Denmark met in Wales on September 4-5 to hammer out a strategy for battling ISIL. This is while the rise of the ISIL Takfiri terrorists has been directly attributed to the Western interventionist policies in the region, particularly in Syria and Iraq.

The ISIL terrorists control large parts of Syria’s east and north. ISIL also sent its Takfiri militants into Iraq in June, seizing large swathes of land straddling the border between Syria and Iraq.