The Satanic Evil within the Fashion Industry, in line with the Movie and Music Industry.

Vatic Note:   This whole NWO issue, we discovered is actually a whole program within the Satanic community for themselves in  gaining control over the entire globe.  Once they do that they intend to kill off all Christians and those who are dispora Jews as well.  They consider the Christians a direct threat and the Judaens as weak and pathetic.

Ironically, I see the Illum, khazar zionist bankers as the most perverted and psychopathic group on the face of the planet and they prove it time and time again.  I do not know why they complain since they are the ones doing all this for us to see.   I wish to also make this clear, that this is in full compliance with the copy write laws as we have a right to republish for purposes of discussion only.

I also wish to point out the abject naked insanity and perverted addictions that these photographers seem to like to dabble in for entertainment AND social engineering our society in order to make the resulting adults much more compliant, and a lot less resistant to such heavily contested censorship.  Once you understand that, it makes this change to a much more 3 dimensional view of the agenda.

The Satanic Evil within the Fashion Industry, in line with the Movie and Music Industry.
http://vigilantcitizen.com/pics-of-the-month/symbolic-pics-month-0914/
by Vigilant Citizen,  September 15, 2014

In this edition of SPOTM : Katy Perry, Rita Ora, Kendall Jenner and more proof that the fashion world is sick to its core. 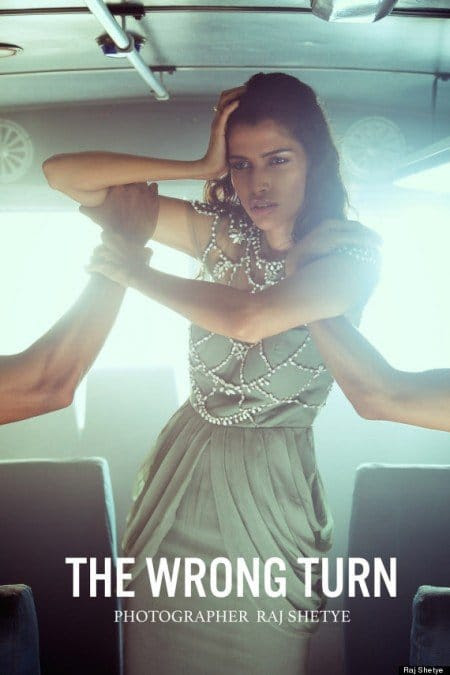 This fashion shoot entitled “The Wrong Turn” by photographer Raj Shetye accomplishes something the fashion industry loves to do : Glorifying abuse and making it fashionable.

These pictures were clearly inspired by the 2012 gang rape that took place in a bus in New Delhi. The assault led to the death of the victim. Here’s a great idea : Let’s dress up some models really nice and let’s recreate this horrendous crime. 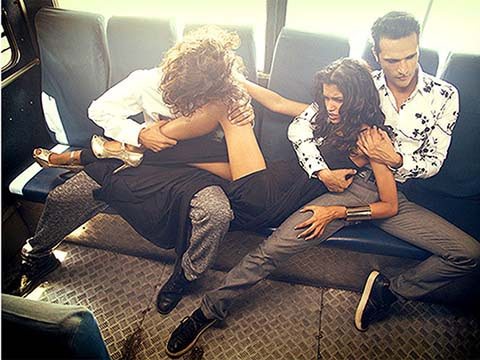 This shoot is meant to sell clothes … but it mostly sells the normalization of abuse. 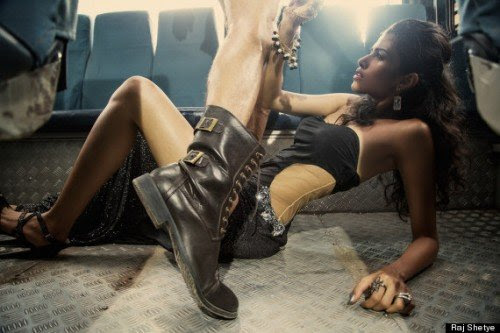 “OMG look at the dress of that girl that’s being violated on a bus floor … WANT IT!” Yeah, I hate the fashion world. 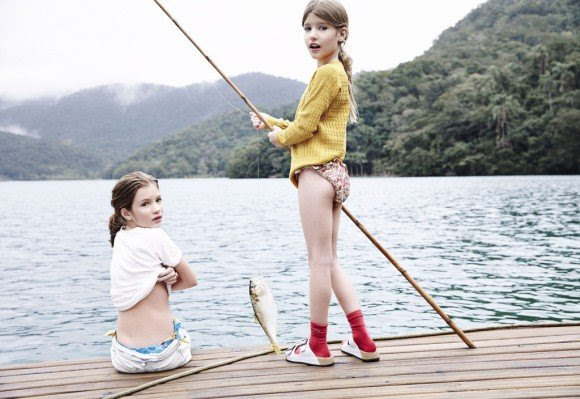 Another reason I hate the fashion world : The blatant and repeated sexualization of children. This photoshoot found in Vogue Children Brazil features young girls in all kinds of suggestive clothing and positions. Here’s a pic of young girls undressing while catching some creep pervert taking a picture of them. 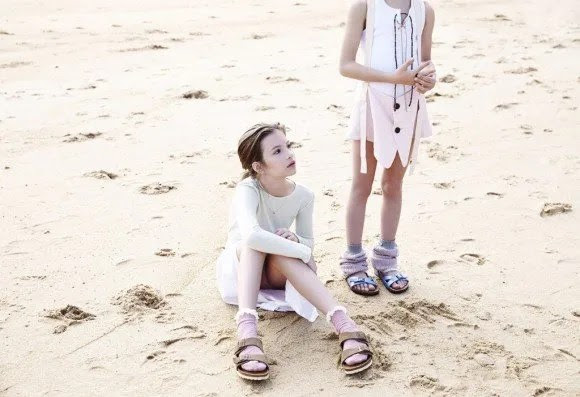 Disturbing up-skirt angle. The photographer most likely clearly indicated the girl to place herself that way. Maybe he should be arrested? 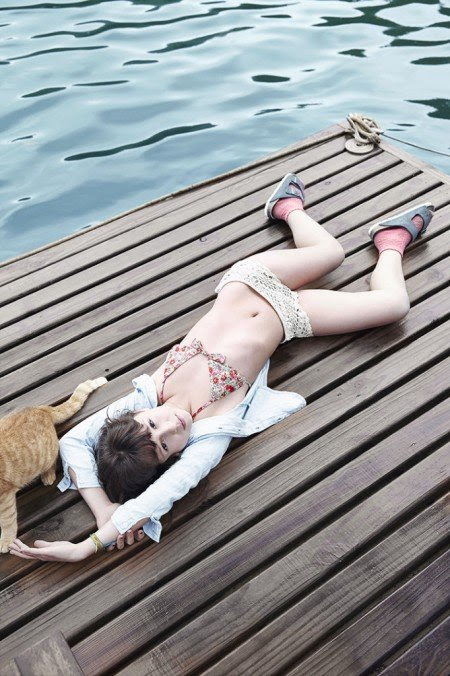 I feel wrong simply posting these pictures but I need to prove a point : The fashion industry is blatantly trying to normalize children abuse. It tells you everything you need to know about those behind the scenes.  (VN:  just a minor indication of your NWO, how do you like it so far? That could be your child... and hopefully she lives afterwards.) 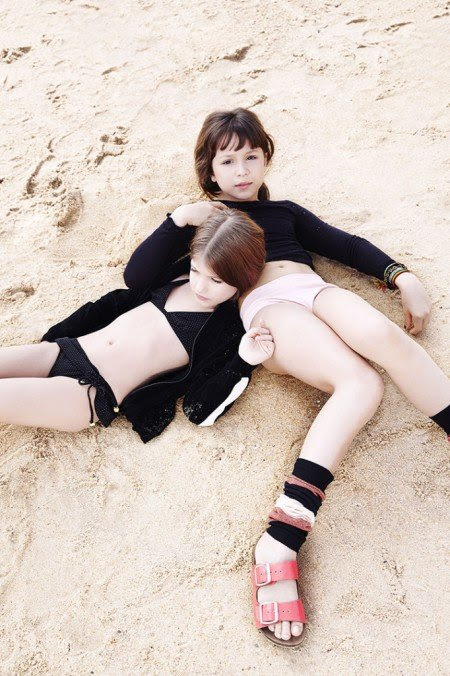 Stop trying to make children sexy.  (VN: Yeah, take a photo of yourself and lets see who you are, you need serious treatment, you are mentally deranged... are you a khazar?  An international banker?  Who are you selling these  to?  Same people??? No wonder they hate Christians. We would make you pay for that perverted addiction since it hurts others.) 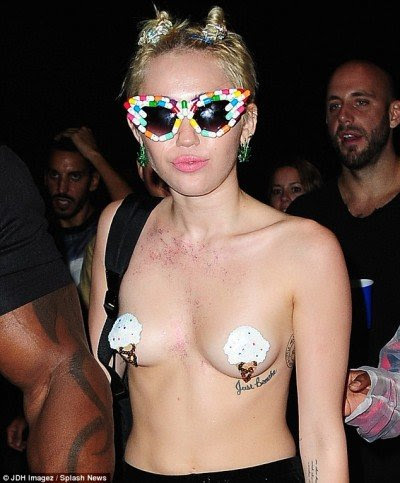 Here’s a direct result of a system that is preying on children. Miley Cyrus walking around with ice cream cones on her chest while wearing sunglasses made of pills, basically telling us : Her vision is “shaded” by MK ULTRA medication.  (VN: what is the rash/rawness on the top of her chest? Looks like rug burns.  Was she shoved into the carpet?) 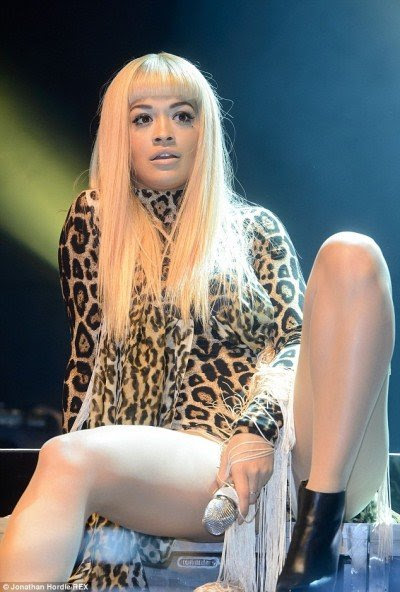 Miley Cyrus is far from being the only Beta Kitten promoted by the industry. Rita Ora is constantly pushed in the spotlight, often dressed in the official uniform of Beta Kittens : Feline print suits. 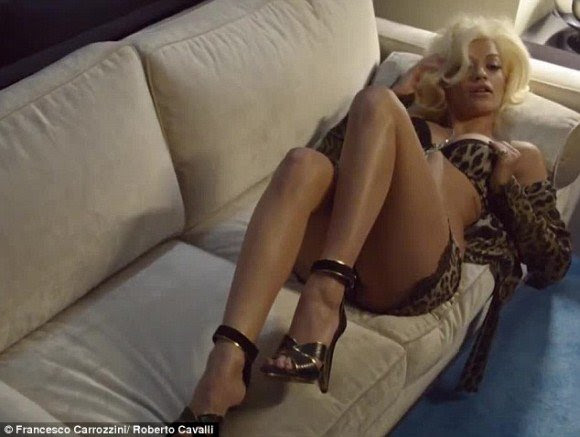 Here she is in a photoshoot “channeling” Marilyn Monroe (all Beta Kittens must emulate Monroe, the original industry Kitten). Of course, she is wearing feline print outfit. 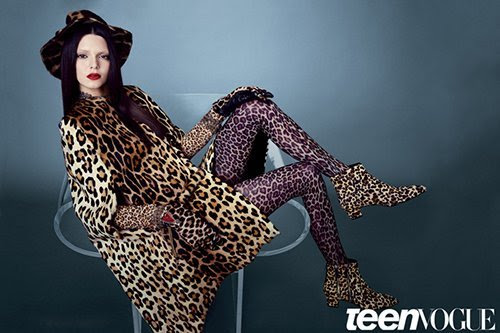 After literally growing up on television with the Kardashians, Kendall Jenner is turning into yet another Beta Kitten. Here she is in Teen Vogue draped in feline prints to an absurd level. 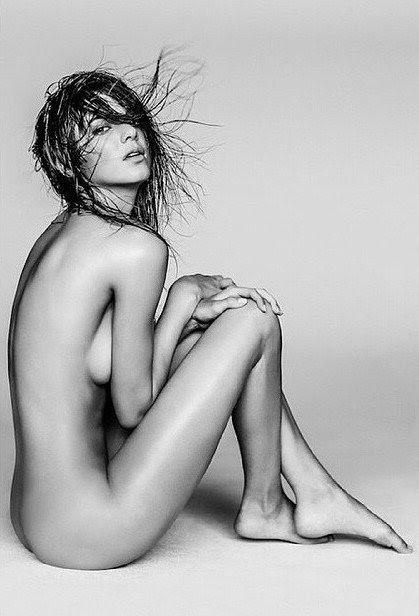 Although she is only 18, Kendall appeared in all kinds of suggestive photoshoots. Here she is in her birthday suit with hair carefully placed to hide one eye, thus saluting her Illuminati industry. 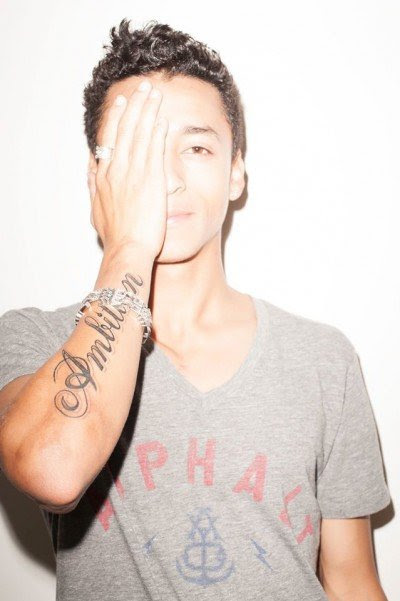 The One-Eyed salute is seen in all fields that might interest young people. This is skateboarder Nyjah Huston’s official picture. He’s doing a straight-up One-Eye thing. 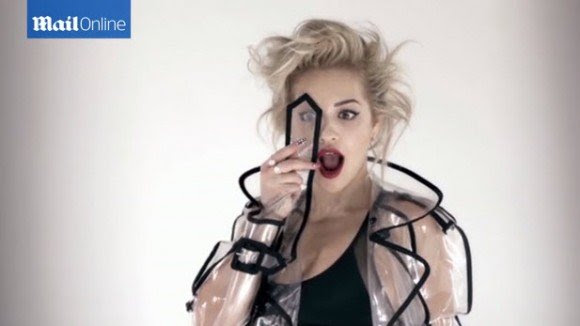 Of course, Rita Ora must also do the One-Eye sign. 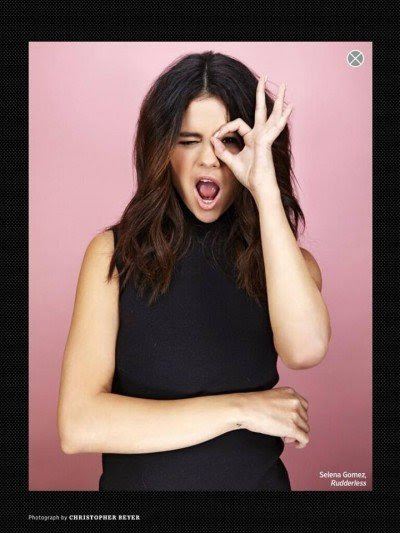 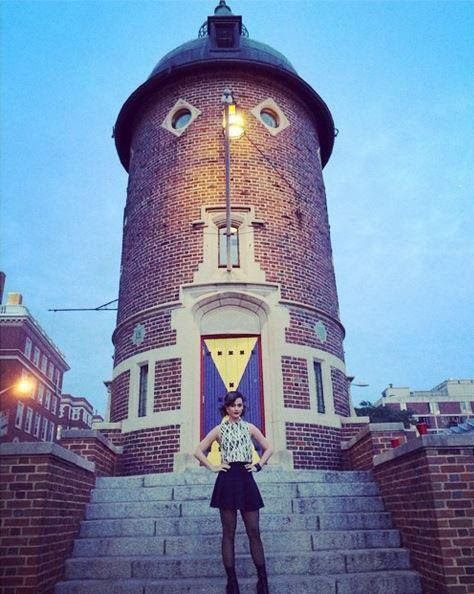 Here’s Katy Perry in front of the Harvard Lampoon Castle. Built by high level Illuminatus William Randolph Hearst, the castle houses the Lampoons which is said to be related to Yale’s secret society Skull and Bones. Perry was “initiated and hazed” into the Lampoons. She wrote as a caption to this picture: “I was never the same”. 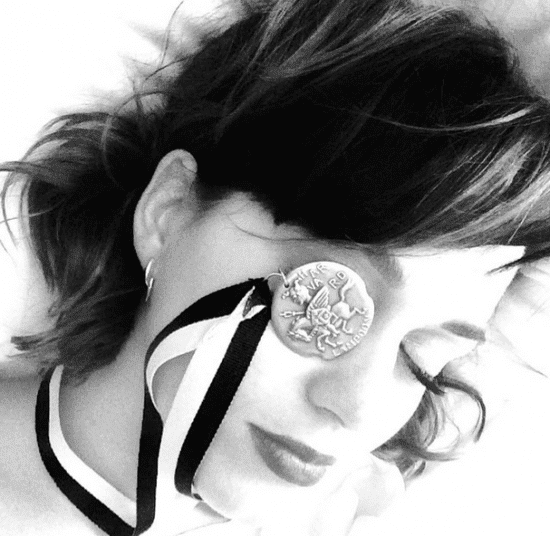 She then posed with a Lampoon medallion over one eye. Pop stars are all about secret societies and their symbolism. 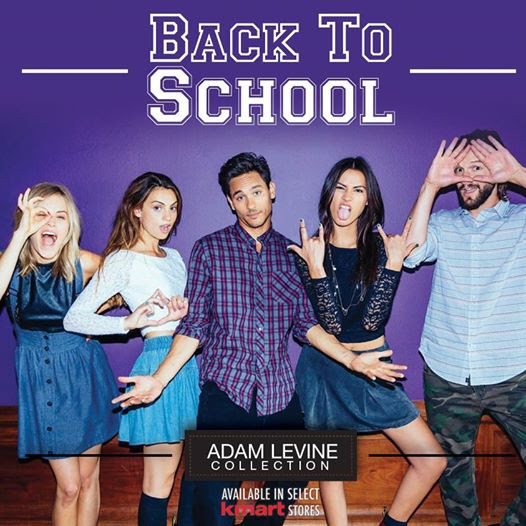 Adam Levine is the singer of Maroon 5, the group that takes up about 65% of all radio airtime. He released a clothing line and, to promote its “Back to School” collection, this ad was released. (VN:  I wonder who he screwed to get such a deal?)  As you can see, it is all about One-Eye Illuminati signs. You too can be as hip as Adam Levine – head to the nearest Kmart and buy these awful clothes!   (VN: I am soooo glad I grew up when I did.  these kids are ruined and it will show as they grow older.  What a waste and what a shame on those grown men and women who do this to these innocent kids, until they are ruined by those who know better.) 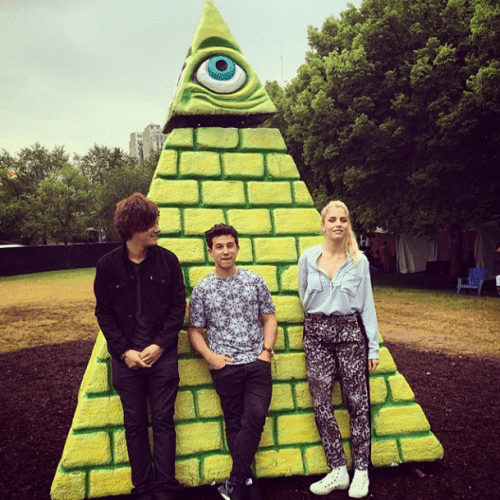 Here’s London Grammar chilling in front of an Illuminati pyramid at Lollapalooza. Did I ever tell you that the music industry is completely ruled by the Illuminati? And that the omnipresence of its symbolism is proof of it? I think I did. 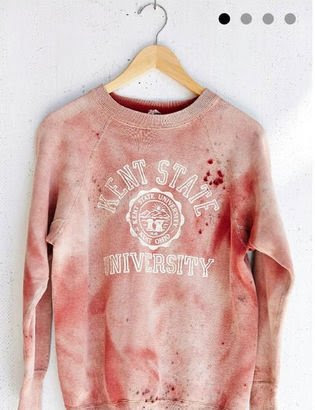 This Urban Outfitters shirt is designed to be stained with blood, which is already slightly disturbing. What makes matters worse is that it is a “Vintage Kent State Sweatshirt”.

In 1970, Kent State University was the site of bloody shooting where four unarmed anti-war students were shot and killed by the National Guard of Ohio.

What a sick way to commemorate an awful event. But what do you expect from the fashion world?  (VN: You know, most ugly worms can turn on ya!) 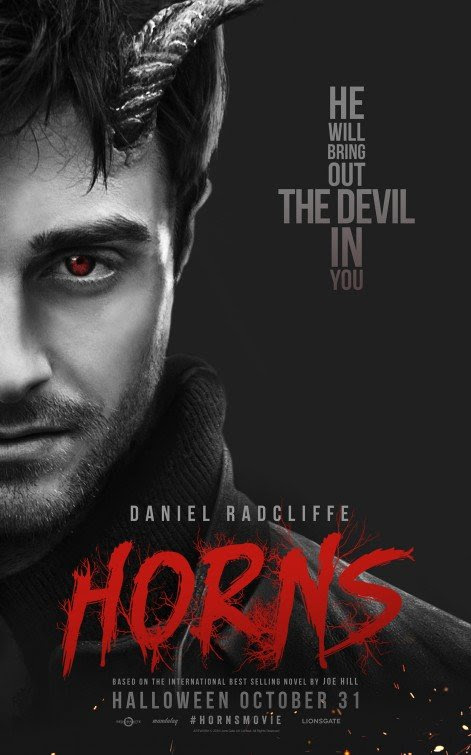 Daniel Radcliffe, who has legions of young fans due to his role as Harry Potter, is now promoting the movie Horns.

This poster features One Eye, devil horns and an inverted cross saying “He will bring out the devil in you”. That is pretty much what the movie industry is about. 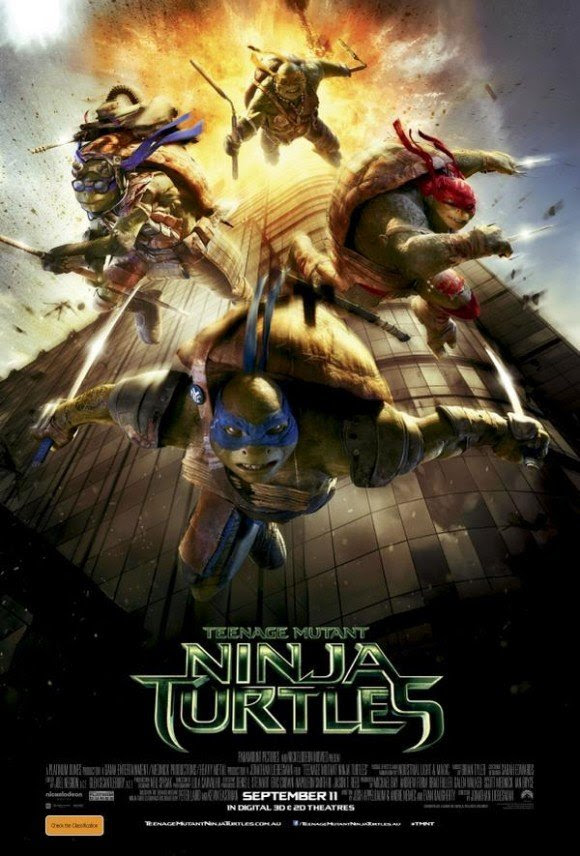 This Ninja Turtles poster disturbed some people. The release date on the poster is September 11 and the poster features the Turtles jumping out of a building on fire the same way some poor souls  jumped out of the WTC to their death on September 11th 2001.

Was this a coincidence or another sick way the industry celebrated the biggest mega-ritual in History?  (VN: What do you expect from Canaanites.)
The article is reproduced in accordance with Section 107 of title 17 of the Copyright Law of the United States relating to fair-use and is for the purposes of criticism, comment, news reporting, teaching, scholarship, and research.
Posted by Vatic Master at 2:00 AM