Vatic Note:  I never saw this one when it came out, rather just fell on it during a journey down another rabbit hole.   Now you see why I like rabbitholes.  You never know what humor exists down there at the right peoples expense.  This building is perfect for not only Homeland Security, but also for AIPAC, SPLC AND THE ADL.  Keep all the foriegn occupiers who like war without sending their own children,  in the insane asylum where they belong.   That is almost better than Iceland and what they did.  LOL

Now, How funny is that? The SS, the gestapo and now Homeland Zecurity, and all bordering on the "insane". LOL Its appropriate that an insane asylum was selected for their new abode. It means they don't have far to travel when one of their 316 hired criminals has to be evaluated and treated. LOL We did a blog on the perverts, pedophiles and drug dealers working for Homeland Security in various capacities, the worst being the TSA.

But then the dual Israeli citizen,  Chertoff is the one who helped the Israeli company put in those screeners and radiation providers before the panty bomber ever showed up.  Isn't it nice to have a "psychic" working as head of Homeland Zecurity?    We have two more psychics working for them as well.   SPLC and the ADL..... why they know all about our civil war we are suppose to have from all these bogus shootings.

We just had one in our town here  TODAY, and it was bogus all to hell.  The good news is, everyone here knows what is what and that they are doing this to try and take our guns.   Good luck.  lol  Absolutely nobody is buying into all these "MIND CONTROL" PERPS SHOOTINGS. Nobody anymore.  If anything, these shootings helped us with the sheep who are finally saying it before we do.... "oh, no, another mind control bogus false flag shooting???  Won't these criminals ever give up".  Yup, I heard that one today and it was from a committed sheep.  I almost fell over. 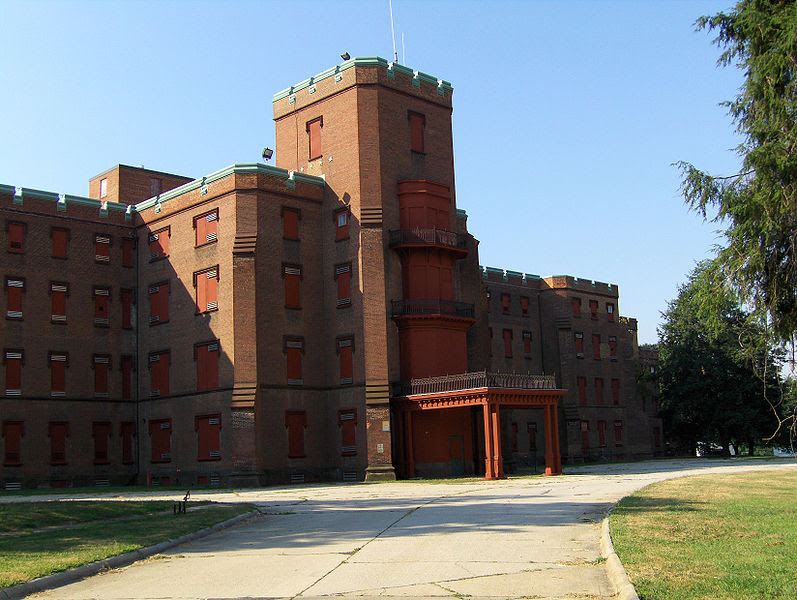 The Center Building at St. Elizabeths, which once held an imprisoned Ezra Pound. Photo via Wikipedia.
Homeland Security operating without a real home (Los Angeles Times):

Five miles southeast of the gleaming Capitol dome, on a scenic bluff overlooking the confluence of the Potomac and Anacostia rivers, the future office of the secretary of Homeland Security sits boarded up and abandoned.
Four years ago, U.S. officials announced plans to renovate the dilapidated, castle-like structure —opened in 1855 as the Government Hospital for the Insane — to anchor Washington’s largest construction project since the Pentagon was built 70 years ago.
The goal was to unite on a single campus the 22 agencies that were stitched together to form the Department of Homeland Security after the Sept. 11, 2001, terrorist attacks.
But the $3.4-billion headquarters project stalled as Congress tried to cut the federal deficit. Lawmakers debated this month whether the nation could afford such a massive home-improvement project, and the House has voted to eliminate the funding in next year’s budget.
As a result, Homeland Security employees remain scattered through more than 35 offices around Washington. Janet Napolitano, their boss, works from a former Navy radar facility that has all the comforts of a barracks. Plus, in traffic, she’s a good 40 minutes from the White House.  (VN: Now if only we could get the AIPAC, SPLC and ADL about 40 hours from the White House, that would be very good and well worth keeping it that way.  LOL)
“They need to get out of there as soon as possible,” said Tom Ridge, who took over the former Navy compound in early 2003 after he was named the first Homeland Security chief. (VN:  I agree,  I don't think they are worth any of the funding they get.  The terrorists are still walking around free and still occupying our government as a foreign nation.  The Dept  needs  to be gone altogether and permanently, since HLS is not doing the job and arresting them.  In addition,  this looks exactly like the SS and gestapo of the mid 30's under Hitler.  Exactly the same and the definition of "insanity" is doing the same  thing over and over and over, and expecting different results.)
In the early rush to get settled, Ridge recalls, one of his assistant secretaries emptied out a broom closet and stuck a desk in it.
“It’s hardly anything anyone can call palatial,” he growled.

Funding gaps and construction delays aren’t swaying the Homeland Security Department from its goal of consolidating most of its Washington-based facilities on the campus of the former St. Elizabeth’s hospital.
“The reduction in the funding stream has impacted our original plans,” said DHS chief administrative officer Don Bathurst. Speaking of the future steps in the project, he said, “We’re going to try to bring those on as quickly as fiscally allowable.”
DHS’s various Washington-area headquarters are spread throughout 50 buildings. Congress has criticized the agency for its lack of integration.
“Bringing the component operation centers together in the DHS operations center will resolve deficiencies in operational management, which was noted in various lessons learned reports and Government Accountability Office reports after Hurricane Katrina,” Bathurst said during a hearing of the House Transportation and Infrastructure Subcommittee on Coast Guard and Maritime Transportation.
Coast Guard vice admiral John Currier and General Services Administration Public Buildings Service commissioner Robert Peck also testified. The Coast Guard is the first division of DHS scheduled to move into the facility.

After several decades in decline, the large campus could not be maintained. In 1987, hospital functions on the eastern campus were transferred from the United States Department of Health and Human Services to the District of Columbia government, with the federal government retaining ownership of the western campus. Several commercial redevelopment opportunities were proposed by the D.C. government and consultants, including relocating the University of the District of Columbia to the campus or developing office and retail space. However, the tremendous cost of bringing the facilities up to code (estimated at $50–$100 million) kept developers away.
With little interest in developing the site privately, the Federal Government stepped in. Control of the western campus—home of the oldest building on the campus, the Center Building—was transferred to the General Services Administration in 2004. The GSA improved security around the campus, shored up roofs, and covered the windows with plywood in an attempt to preserve the campus until a tenant could be found.
After three years of searching for an occupant, the Department of Homeland Security (DHS) announced on March 20, 2007 that it would spend approximately US$4.1 billion to move its headquarters and most of its Washington-based offices to a new 4,500,000-square-foot (418,000 m2) facility on the site, beginning with the United States Coast Guard in 2010. DHS, whose operations are scattered around dozens of buildings in the Washington, D.C. area, hopes to consolidate at least 60 of its facilities at St. Elizabeths and to save $64 million per year in rental costs. DHS also hopes to improve employee morale and unity by having a central location from which to operate.
The plans to locate DHS to St. Elizabeths have been met with criticism, however. Historic preservationists argue that the move will destroy dozens of historic buildings located on the campus and that other alternatives should be considered.Community activists have also expressed concern that the planned high-security facility will not interact with the surrounding community and do little to revitalize the economically depressed area.
A ceremonial groundbreaking for the DHS consolidated headquarters took place at St. Elizabeths on September 11, 2009. The event was attended by Senator Joseph Lieberman, DHS Secretary Janet Napolitano, DC Delegate Eleanor Holmes Norton, DC Mayor Adrian Fenty, and acting GSA Administrator Paul Prouty.

Related Material From the Archive: