Vatic Note:  Before I begin, I wish to address the very last piece below this article that asks the Question, "Why was McDonald's the official restaurant of the Olympics?" and without reading the article,  I  have come up with  a reason and it can be explained by pictures such as these.
We did a whole blog just on the occult and satanism of the Olympics in the great former, loser empire of Great Britain, and now you can see who else is occult and satanic, why, by golly, its the owner/brothers of McDonalds.  Gee, what a surprise that they got to be the official restaurant of the Olympics. LOL 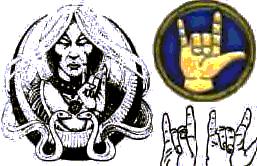 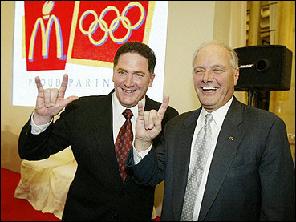 Ok, now onto the article below.  Unfortunately, it shows just how bad this is and how much worse its going to be once these fascist satanist take control of the planet.  This depopulation agenda they have is getting out of hand.  They dont even care that we know what they are doing.  Destroying our organs with their "frankenstein"  food.
They feed us poisons, call it food, and then expect us to sit by and accept it.  Well, now that we have shown we have no  intentions of doing that, they engage in legally defined terrorism to get free speech quashed and infomation distributors silenced.   Its important we see this because that means there is info out there that we have no access to, that could harm us in the end.  We have the right to know about it.  So read this below and see what you think.   Because I found out that smuckers jelly is part of the effort to silence GMO advocates in Calif asking for labelling,  I decided to make my own jelly, so I bought organic peaches and just finished making peach preserves. I am going to be doing this all fall.
See?  We do not have to eat any of their food.  Buy heritage organic seeds, grow our own food, possibly in conjunction with others.   Make our jelly, canned vegetables, and fruits, make our own bread and in fact make our own flour and then we won't have inflation since we won't be buying any of their death cult products.  I quit eating at McDonald's about 8 years ago when I discoverd the owners were in fact, satanists.
Article Debunking Organic Food Hit Piece Targeted by Massive Cyber Attack
By Anthony Gucciardi
theintelhub.com
September 5, 2012
Contributed by and Originally Appeared on NaturalSociety

On the night of September 2, after hearing about the ridiculous study that demonized organic food and claimed that it was virtually the same as GMO-laden conventional food, I decided to shoot a short 9 minute video within an accompanying article breaking down the study.
As this was the night before the real news cycle began the following morning in the alternative media, this piece really blew up.
It was graciously hosted on Alex Jones’ Infowars as a featured news piece as well as featured in an article on the subject by NaturalNews‘ Mike Adams.
Essentially, it was the first piece to really respond to the outlandish hit piece with a serious response.
It may come as no surprise to many of you, then, to know that we were hit with a massive attack between the early morning hours of September 4th (as the piece really began to gain traction) and the night of the same day.
Hit by a complicated series of denial of service attack (known as a DDoS attack) resulting in a complete server crash, we did our best to trace the location and halt the intrusion.

Attempts Made to Delete Article


What is most interesting about this attack, however, is that multiple attempts were also made to actually infiltrate the server and remove the organic food study piece. In the process, a similar article was actually damaged and rendered completely inaccessible to readers for a long period of time.
It is interesting to note that all of this happened during the crunch time for Proposition 37, which seeks to label GMOs in California. The video and article centered heavily on the fact that GMOs within conventional food make it a serious threat to your health.
Ultimately, we managed to stop the attack after several hours of upgrading server security and blocking the attacker(s). While the attack was certainly on a larger scale than we have seen before, it is not entirely unlike any other attack in the past.
Our #1 most shared article on the entire site entitled ‘Hungary Destroys all Monsanto GMO Corn Fields‘ was successfully attacked and removed back in 2011 as it ascended toover 236,000 shares to become one of the most shared articles of 2011 .

Attacks Only Highlight Deception and Corruption

The attacks show nothing more than the fact that organizations with serious vested interest in deception and fortified corruption are desperately clinging on to any shred of credibility that they have left.
By the way, we cannot confirm at the time who issued the attacks. What we can say, however, is that it is an organization with large scale capability. By the way, many so-called individual ‘hackers’ are often decent individuals who would never take down a truthful alternative news piece.
These kinds of attacks can always be traced back to corporate interests or some form of government body.
What the attackers fail to understand is the fact that simply deleting an article and tossing it down the memory hole will do nothing in today’s age of alternative news media.
We are very thankful to those who continue to host our articles in the very case that they are assaulted by criminal entities in an attempt to remove the information from the web.
It’s simply impossible to delete the content of our articles off of the internet once published thanks to the many websites that carry them on a daily basis. In addition, theYoutube video remained untouched.
Instead of groveling to malicious groups and ‘toning it down’, the real answer is to start generating even more hard-hitting content that may strike some chords within the establishment.
Delving into a ‘hot war’ of sorts in regards to the deletion of content and news media by corporate interests only serves to demonstrate their total frailty and lack of pull over the increasingly-aware general public.
Follow Us on Twitter

6 New GMO Crops that May Soon Hit Your Dinner Table

Why is McDonald’s the Official Restaurant of the Olympics?