THIS is What our Ancestors Fought For and We Must Preserve At All Costs.

***  Ohh, they do not want this up.  They are messing with the type and lay out again. please read anyway.  They want to make us forget our birth as a nation, why it happened and how like back then, this is.  Its time for that second revolution against the same illum Zionist families and prevailing a second time.  This time, our responsibility for what has happened, is to the entire globe and all its people.  We allowed these criminals to invade our government and take it over, and use it to murder millions of innocent civilians, so we are now responsible to rid this government of these same people.  Only the "people" can do it.   Jefferson warned us that the garden of Liberty would have to be washed periodically with the blood of both tyrants and patriots .  I guess we are coming into one of those times.   We will see.  We are a patient people.

Vatic note:  This is for the 4th of July 2012.  READ THIS and then read the next two blogs and understand the conflict between celebrating today and what we are allowing to happen to destroy what this day represents. Dennis Kucinish does an excellent job of reminding us.


As Adam Kokesh so eloquently stated "IS IT TIME?"  Is it???  At some  point we will know when it is time.  I truly believe we will all come together when that time comes.  Look how long it took the colonists to finally dump King khazar from this nation.  But once they decided they would rather die fighting than to live on their knees,  it was over.  The Greatest military in the World at that time was defeated by a bunch of farmers ill equipped and ill trained.  Its the "HEART" and passion that determines who will win and who will lose.   Their hearts and passion are tied up in their addictions, so they lose.


How ironic that this fourth of July, this generation finds itself in the exact same predicament our forefathers were in 230 years ago.   Its the same players as back then,  the bankers,  the King/Queen of England, and the illuminati families with a Israel thrown in.  How ironic.  They actually believe their advanced technology will dominate.  It just shows how far they have come in all that time..... they still today do not understand what a love of freedom can do to overcome tyranny at its worse.  They will soon find out.


In the meantime.  Read the strategy and tactics and act like the bad guys do not exist and do what we wish to do as protected under these Bill of Rights and the Constitution.   Pull all funds out of the big major stock brokerage houses and interntional banks and put them into local small community banks and state banks.  Begin showing them what it would mean to live without us.


THIS is What our Ancestors Fought For and We Must Preserve At All Costs.


The Declaration of Independence 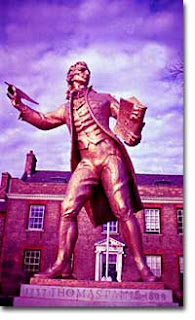 Thomas Paine advocated the independence of the American colonies from Britain. The writings of Paine, Samuel Adams, and others convinced Americans to set up their own state and democratic government.


As tensions between Britain and the American colonies increased, a series of meetings were called, including that of the Second Continental Congress (1775-1776.) On July 4, 1776, the delegates approved the Declaration of Independence, the event that marks the birth of the United States.


Thomas Jefferson, a delegate from Virginia, drafted the document primarily as a list of grievances against the king. His most important words, however, clearly shaped the philosophical basis of the new government.

The famous introduction clearly reflected John Locke's social contract theory: "...to secure these rights [Life, Liberty, and the pursuit of happiness], Governments are instituted among men, deriving their just powers from the consent of the governed."


Jefferson further reasoned that since the British government had abused these rights, the colonists had the right "to alter or to abolish it, and to institute new Government."


The American Revolution and the Articles of Confederation 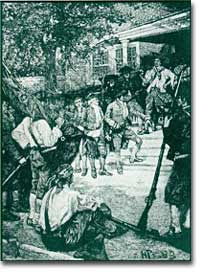 Shay's Rebellion showed the weaknesses of the Articles of Confederation. When the central government couldn't put down the rebellion, the first stirrings of federalism began to gather strength.


The British, of course, did not recognize the Declaration and continued to send troops to contain the rebellion. The war continued until 1783, so the new government had to be put in place in a wartime atmosphere. The Articles of Confederation, a compact among the thirteen original states, was written in 1776 but not ratified by the states until 1781. The loose "league of friendship" that it created reflected the founders' reaction to the central authority of King George III.


The government gave most powers to the states, and the central government consisted only of a legislature. Above all, the colonists wanted to preserve their liberties, but the central governments' lack of power proved to be disastrous. It could not regulate trade or keep the states from circulating their own currency. No chief executive could make real decisions, and no national court could settle disputes among states. And perhaps most importantly, they could not efficiently conduct a war nor pay the debts incurred once the war was over. 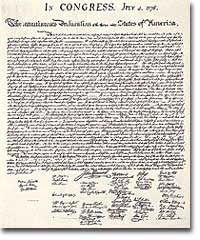 The Declaration of Independence reflected many of the ideals that the signers believed in. Ideas such as life, liberty, and the pursuit of happiness were products of the Enlightenment.

By 1786 the new country was in serious economic straits, and states were quarreling over boundary lines and tariffs. An economic depression left not only states in trouble, but also many ordinary citizens, such as farmers and merchants, were deep in debt as well. Shays' Rebellion, a revolt by angry farmers in Massachusetts, symbolized the chaos in the country.


Even though the Massachusetts militia finally put the rebellion down, it pointed out the inability of the central government to maintain law and order. In reaction, Alexander Hamilton of New York initiated the organization of a meeting in Philadelphia in 1787. This convention would eventually throw out the Articles of Confederation and draft the Constitution.


So the freedom that the American Revolution sought to preserve proved to create a government under the Articles of Confederation that could not keep law and order. But the failure of the initial experiment helped the founders to find a more perfect balance between liberty and order in the Constitution they produced in 1787.

great article, thanx. Want more about this topic? Read 5000 year leap, I try to get as many people to read this book as possible. Keep up the tough/gr8 work and thanx again from the live free or die state (NH)

Aaah, NH, one of my favorite states just because of their commitment to freedom and liberty. Live Free or Die, is exactly where we are Going. I suspect the addicted satanists have no idea what they may have loosed upon themselves, if they continue to push.

Technology will carry them only so far, which will not change our capacity to adapt as they are unable to do. We will adapt and have the skills to thwart their technology and they know it. So they are using gradualism to try and manipulate us into not responding. Their attempts at mind control for mass manipulation will not work, because we know they are using it, doing that and we can and are countering it. Notice the fine hairs on your legs and arms??? They are shaped differently than your regular hair, Well those are small fiber antennae to receive signals from haarp for tracking and brainwashing. Well, we have found a way around those little devils and they have no idea how something else they have done has helped us. I won't go into on here, but they really screwed up and us dumb cattle goyim figured it out and have countered it. LOL I love it.

That works for a while to manipulate us, just like it did in 1776, but eventually, only 5% of our population conducted the war against the greatest military in the world at the time and won. So nothing is certain for them. Their arrogance will be and has been their downfall. NEVER UNDERESTIMATE YOUR ENEMY AND THAT GOES FOR US TOO.

Right now they want us to rebel so they can do their martial law legally, but we do not have to do that. Read Sun Tsu, the art of War and follow what he says. Its a 2000 year old strategy book on war when you are the underdog in military equipment, resources and positioning. Lots of good material in there on how to overcome without confrontation. TAKE THEIR TOOLS AND USE THEM AGAINST THEM. That works. Proof?

Notice almost no one is saying "Jews" anymore in describing them, they are saying "Khazars". Well, that was intentional. Funny how that worm can turn on ya! LOL Thats just one example of many.