Vatic Note:  Did some elite organization have a meeting somewhere because all of a sudden we are back to foreign affairs upheaval  which means they are trying to distract us from what they are planning on doing to us.  I don't think there are enough of them to handle 6.5 billion people on this planet right now, so they better cool their jets or they may find themselves at the other end of a global war of the people against the 13 families and their banker minions.    We are getting pretty fed up with them and all the sleeze we are finding in our digging.

A 33-year-old man was shot and killed in violence tied to ongoing street protests in the Thai capital, a hospital official said, confirming the first death in Friday's violence and the second in less than 24 hours.

Suwinai Busarakamwong of Kluay Namthai Hospital in Bangkok said the man, who was not identified, was brought to the hospital with a gunshot wound to the chest.

Street clashes overnight killed one other Red Shirt protester. At least 12 more people were wounded in Friday's mounting violence, including a Thai photographer and a foreign journalist. 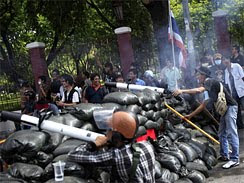 A group of anti-government protesters set fire to security forces' vehicles as gunshots were heard in central Bangkok in a burst of new violence after nightlong clashes.

The government seemed to be growing weary of its containment strategy - attempting to keep the Red Shirts penned into a roughly one square mile encampment in the heart of the capital - and the protesters showed little willingness to back down, setting the stage for what could be a large-scale confrontation.

Parkinson says it looks increasingly like the government forces will try to force the Red Shirts out of their downtown Bangkok encampment, which has become home to as many as 20,000 people.

Gunshots were heard in the area, but it was not clear who was firing.

The violence, which so far has claimed 30 lives and injured hundreds since anti-government Red Shirt protesters began camping in the capital on March 12, plunged Thailand deeper into political uncertainty, with both sides hardening their positions.

Parkinson tells CBS that Friday began relatively peacefully in the Red Shirt camp, with government helicopters buzzing overhead and protesters firing flares and fireworks to try and distract them. But the mood changed quickly when the police and soldiers started moving in on the camp.

Gunshots rang out throughout the night and into the morning in central Bangkok. At daybreak, a group of protesters captured and vandalized two military water cannon trucks at the intersection of Sathorn and Rama IV roads in the heart of the business district. They ripped the cannon from its moorings and used its plastic barrel to shoot firecrackers from behind a sandbag bunker they had commandeered from soldiers.

The Red Shirt protesters, who have taken over an upscale 1-square-mile area in central Bangkok, vowed they will not give up until the government resigns and early elections are called.

"I'm not scared. We are here only to ask for democracy. Why are we facing violence?" Mukda Saelim, 39, a mushroom farmer from Chonburi province, said. "I don't have anything to fight them, but I'm not afraid. You asked if this is safe? It's not."

The Red Shirts believe Prime Minister Abhisit Vejjajiva's coalition government came to power illegitimately through manipulation of the courts and the backing of the powerful military. They are demanding he dissolve Parliament immediately and call new elections.

Chances of a compromise dimmed further after renegade army Maj. Gen. Khattiya Sawasdiphol, who is accused of creating a paramilitary force for the Red Shirts, was shot in the head Thursday evening. He was talking to reporters just inside the perimeter of the protesters' encampment in Saladeng when the bullet hit him.

He was taken to a hospital in a coma and was in critical condition. The hospital said his brain had swollen and he was unlikely to survive.

It was not known who shot Khattiya, better known by the nickname Seh Daeng. But the Red Shirts blamed the government.

"This is illegal use of force ordered by Abhisit Vejjajiva," said Arisman Pongruengrong, a Red Shirt leader. "It is clear that there were no clashes at Saladeng, but Seh Daeng was shot by a government sniper. This is clearly a use of war weapons on the people."