A Historic Breakthrough for U.S. Billionaires

A Historic Breakthrough for U.S. Billionaires

http://toomuchonline.org/a-historic-breakthrough-for-u-s-billionaires/
In 2010 America, schools, students, and teachers share the pain. The heirs to our mega rich, meanwhile, don’t have to share anything.

By Sam Pizzigati, Too Much

May 11, 2010 "Too Much" -- A moment of silence, please, for Dan Duncan. The 77-year-old Duncan, a Houston resident, passed away the end of March. He left behind a spouse, four grown children, four grandkids — and a fortune worth $9 billion.

Duncan also left behind another distinction. He has become the first American billionaire to ever leave his heirs a tax-free fortune.

America’s first-ever billionaire — John D. Rockefeller — slid into the hereafter back in 1937. At that time, a federal estate tax had already been in effect for 21 years. John D.’s heirs faced a 70 percent tax rate on the bulk of his estate.

If Duncan had passed on last year, instead of this one, his heirs would have had to share their new billions, as many as four of them, with the rest of America. But this year, for the first time since 1916, no estate tax graces the tax code.

How much will the absence of an estate tax this year cost the federal treasury? We can’t say with any certainty. No one knows, after all, how many other billionaires may kick the bucket between now and December 31. We do know that in 2008, the latest year with figures available, the federal government collected $25.7 billion in estate tax revenue.

That sum, by coincidence, would be enough to fully fund the $23 billion Rep. George Miller from California and Senator Tom Harkin from Iowa want Congress to appropriate, as soon as possible, to avert the nation’s worst teacher layoff crisis since the Great Depression. 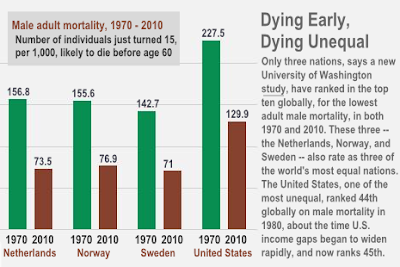 Two-thirds of the nation’s school districts, says a new American Association of School Administrators survey, have already axed educators. In the coming school year, without additional budget help, 90 percent expect to have to let jobs go.

That help, at this point, seems a longshot. The 2009 Obama administration stimulus legislation did save tens of thousands of teacher jobs. But the stimulus dollars earmarked for education are running out, and deficit hawks in Congress say the nation can’t afford to appropriate any more.

How can a civilized nation afford to hand the heirs of the super rich billions of dollars tax-free and not afford to keep teachers in classrooms?

We can trace our current budget inanity back to 2001, the year the Bush White House pushed Congress to repeal the federal estate tax. But the White House didn’t have the votes needed, under Senate rules, for a costly permanent repeal.

So White House officials cooked the budget books to camouflage the true cost of estate tax repeal. They maneuvered a tax bill through Congress that lowered estate tax rates over the rest of the decade and repealed the estate tax only for 2010. The estate tax, under the 2001 legislation, would then reappear in 2011.

White House strategists, of course, never expected to ever see this reappearance. They figured a future Congress would extend repeal beyond 2010.

But this “breathtakingly cynical” move, as the University of Cincinnati Law School’s Paul Caron notes, would prove too clever by half. By 2007, Bush had lost his House of Representatives majority and any realistic shot at making the repeal in 2010 permanent.

Supporters of the estate tax, meanwhile, assumed that the Congress elected in 2008 would legislate away the one-year estate tax repeal slated for 2010. But that didn’t happen either. In 2009, lawmakers deadlocked.

The friends of the financially fortunate in Congress, a bipartisan group, wanted any new estate tax set at a rate that would, at worse, merely inconvenience the super rich. Lawmakers less friendly to the fortunate wanted much more: estate tax rates high enough to break up grand concentrations of private wealth, a key goal of the reformers who championed the original estate tax a century ago.

Amid this stalemate, last year ended without any legislative estate tax action, and total estate tax repeal for 2010, as stipulated by the 2001 tax cut legislation, went into effect January 1.

The conventional wisdom on Capitol Hill then shifted. Lawmakers, observers opined, would move expeditiously in 2010 to pass some sort of an estate tax and make the levy retroactive for the entire year.

But no one in Congress, notes legal trade journal editor Scott Martin, apparently expected that a billionaire of Dan Duncan’s magnitude would actually go and die without an estate tax on the books. Duncan’s death has changed everything.

Those lawyers will likely battle in the courts, to the last billable hour, any move to make the estate tax retroactive for all of 2010. And the longer 2010 goes without an estate tax on the books, the higher the chances the courts will agree.

In the meantime, none of the obituaries for Dan Duncan that have appeared since his death explore his status as America’s first estate tax-free billionaire. The obituaries have insteadgushed over Duncan’s philanthropy. He had contributed, over his last five years, more than $250 million to hospitals and other institutions.

But Duncan, by yardsticks that measure capacity to give, rates as distinctly second tier as a philanthropist. The first tier belongs to philanthropists like Judith Anderson, a teacher in Houston’s Almeda Elementary School.

Last week, on the occasion of National Teacher Appreciation Day, a local media outlet in Houston spotlighted Anderson’s long philanthropic history. Over the course of her 20-year school career, she has spent thousands of dollars on her students, all without reimbursement.

On one project alone, setting up a school soccer league, Anderson spent $2,000 — on a teacher’s salary. By comparison, Duncan’s energy pipeline empire now generates $600 million a year in annual cash flow. Next to that, $50 million in annual tax-deductible charitable contributions hardly matches the sacrifice that teachers like Judith Anderson are making year in and year out.

The reward for these sacrifices? Budget cuts that pink slip teachers and overcrowd classrooms, budget cuts that could be avoided if the rich were paying their appropriate tax share.

His billionaire heirs, odds are, won’t do that. That burden’s on the rest of us.

Sam Pizzigati edits Too Much, the online newsletter on excess and inequality published by the Washington, D.C.-based Institute for Policy Studies. Too Much appears weekly. Read the current issue or sign up to receive Too Much in your email inbox