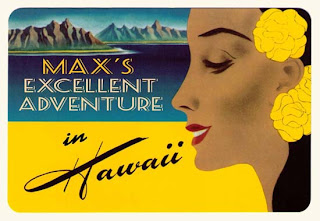 From the Spring Equinox of 2010 through early April; Max, The Crystal Skull, organized a visit to the stunningly beautiful Islands of Hawaii. An ancient artifact revisited an ancient civilization — an old Rock Star toured Lemuria. And, for whatever purpose, I was there.

Who is Max? Where is he from? Why did he choose Hawaii? And what on Earth is he up to? All very good questions to which I have no answer, but I will not refrain from speculating.

Max, a good-looking guy by crystal skull standards, was able to commandeer 11 people to leave the mainland and join him in Hawaii. He arranged 13 people to show up at almost every sacred site where grid work or ceremony was performed, borrowing or losing people as needed. Despite his lack of arms, legs, and a torso, he was definitely not handicapped. We were. We all had luggage. He, conversely, was luggage. Not only handsome, but smart. 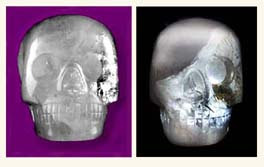 As any self-respecting quartz crystal would do, Max magnified everything in his field; good or bad, right or wrong, until it felt like “The Lord of the Rings” was descending upon our rapidly assembled and clueless Fellowship. Myth upon myth upon myth played out within our ranks. Hawaiian Vacation? Not. Hawaiian Initiation? Absolutely.

Max, the artifact and the being, remain a mystery wrapped up in an enigma. Formed from five separate matrices of crystal, he could not have been carved by any tool we own without splitting him asunder. The manner of his creation remains unsolved, nor can his age be determined by our measurements.

Who is this crystal skull who calls himself Max? According to a seven-year-old boy who Max spoke to last year in Santa Monica, he is 5 million years old and comes from a planet 80 planets distant from Alcyone, The Central Sun. His planet was destroyed, but he was evacuated before its fall and brought here, to this remote planet on the outskirts of the Milky Way. He is both the holder of the encoded information of his origin and is here to seed this planet with this information.

Was the boy lying, or was the skull lying? We'll never know. Neither were administered a polygraph test. But, as Max's roommate for many weeks, I think neither were lying. Max is definitely not from this world. He's just pretending to be a Texan. (Keep in mind, the last Texan we knew who had rocks for brains could hardly have been considered a repository of any knowledge.)

In accordance with both legend and prophecy, Max is one of 13 crystal skulls that were placed on this planet from other worlds. Each contains a specific body of knowledge from the place or its origin. Only when all 13 are finally assembled, as prophecy says they will be, the full impact of their presence and purpose will become known.

As Patricio Dominguez, Pueblo Indian Spiritual Elder, has stated, "The crystal skulls are complete depositories of knowledge and each skull contains a particular specialist area of information — like a living library.... The knowledge that is going to come out from the skulls is quite unimaginable to our current minds. But [the fact] that it is definitely going to come out at a certain time is already foregone. It has been prophesied."

And Cherokee Medicine Man, Harley Swift-Deer Reagan, says this: "The skulls were kept inside a pyramid in a formation of tremendous power known as the Ark. The Ark was comprised of the twelve skulls from each of the sacred planets kept in a circle, with the thirteenth skull, the largest, placed in the center of this formation. This thirteenth skull represents the collective consciousness of all the worlds. It connects up the knowledge of all the sacred planets." 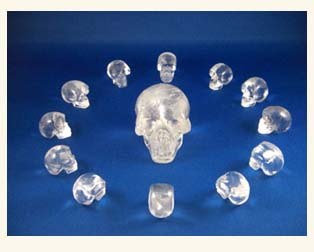 Don Alejandro Cirilo Oxlaj Peres, Mayan Priest and Shaman, states: "...The prophecy says now is the time of the awakening. This is your job now, to awaken....For the Time of Warning has come to pass and the Warriors of the Rainbow are now beginning to be born. The Vale of Tears, the Nine Hells, is over and it is time to prepare for the 13 Heavens. The ancestors are returning, my brothers and sisters, and we do not have long. Now is the time that the prophecies will be fulfilled."

The shaman of Siberia at Altai also speak of an event to take place very soon, heralded by the discovery of the buried body of the "Siberian Ice Maiden" in 1993. Bedecked in fine clothing, an exalted headpiece, and fine-crafted jewelry; she was laid to rest with respect and reverence some 6,000 years ago. To the shaman of Altai, she was not merely a spectacular archeological find, but a sign that the time had come for the great reunion of the fragmented family to which we all belong. The return was now assured, and upon this return we would be able to lay aside our blinders, remember our kin and reclaim our forgotten past.

Add to all of this the Hopi Indians' words, "We are the ones we are waiting for." Perhaps there is good reason why we are still waiting. We are waiting for our fragmented self to be restored. We await the return of our ancestors, and the restoration of the 12-stranded DNA to which we are heir, presided over by the 13th skull, representing our collective consciousness made whole.

The number 13 appears as a motif throughout our global saga. An unlucky number? Perhaps, but for whom? For Goldman Sachs? The Knights of Malta? Halliburton, British Petroleum, or a rabid left-brained oligarchy? All of them, probably; but not unlucky for the rest of us.

The number 13, usually presented as 12+1, has appeared throughout our history. Jacob and his twelve sons equals 13, and Jacob's progeny spawned 13 (not 12) tribes of Israel, with the House of Joseph split between Joseph's two sons, Manasseh and Ephraim, which were counted as distinct tribes.

Christ and his 12 apostles equals 13. King Arthur and his 12 Knights of the Round Table equals 13. This is the number of months in a natural calendar, and a key number in the Mayan Calendar.

There were 13 original colonies that formed the United States, with Maine and Vermont not among them, except as included land masses. The Ascension Dome of the US Capitol Buildings depicts George Washington ascending to godhood (what?) surrounded by 13 Priestesses from the Roman Temple of Vesta. As William Henry proposes, perhaps this is not an allusion to the 13 original colonies, but instead speaks of a long forgotten cosmic confederation to which we are party and of which our Masonic founders had knowledge. It's worth consideration since how many capitol buildings on this planet have an ascension dome as the central image of their politcal world? How many countries were established for the sole purpose of freedom? Maybe our founders understood that political freedom was a hope, though probably a fatally flawed oxymoron. Actual freedom lie elsewhere.

And then there is Max, one of 13 skulls prophesied to appear at the end of time, destined to attend a conclave that will usher in our freedom. All things considered, 13 doesn't sound particularly unlucky to me.

As for why Max chose to visit Hawaii, that is the least mysterious question of all. These islands were breath-taking, tolerant beyond all measure, located in the middle of the Pacific Ocean, 2,000 miles from any major land mass. Ancient, complex, and kind; vestiges of another world, standing at the center of a divide.

Not only are these islands the remnants of the Lemurian continent, long ago destroyed; but they lie at the crossroad, the corpus callosum, that divides the planetary body into right and left-brained sides. At this juncture, the East and the West collide. Here an ancient civilization still lingers in the air, hinting of the healing of the individual and global rift that spun us into separation, duality and descent so many eons ago.

As Mark Twain, not especially noted for his mushiness, expressed of Hawaii:

“No alien land in all the world has any deep, strong charm for me but that one; no other land could so longingly and beseechingly haunt me, sleeping and waking, through half a lifetime, as that one has done. Other things leave me, but it abides; other things change, but it remains the same. For me its balmy airs are always blowing, its summer seas flashing in the sun; the pulsing of its surf-beat in my ear; I can see its garlanded crags, its leaping cascades, its plumy palms drowsing by the shore; its remote summits floating like islands above the cloud rack; I can feel the spirit of its wooded solitudes; I can hear the splash of its brooks; in my nostrils still lives the breath of flowers that perished twenty years ago.”

One hundred years later I cannot express his words any better, nor do I understand his words any less. I too fell in love with Hawaii, just as he did. Not so much for its incomparable physical beauty which would have been reason enough, but more so for the awesome spiritual presence that permeates and governs this island world. Kind, gentle, generous, loving, mysterious, psychic and feminine; it is the powerful and illusive, yet deeply grounded, Spirit of Aloha that pulls on my heart. I have never felt more honored or safer as a woman anywhere else in this world.

The Hawaiian language is another mystery. By some accounts, the Lemurians came to this planet from another world to the lands of which Hawaii is now a vestige. These beings were telepathic; the indigenous population they encountered was not. They consequently devised a language to communicate not only their thoughts, but also their consciousness. The language they created was both a means of audial communication and a spiritual code. That language is Hawaiian.

Multi-layered, every word has greater meaning. For instance, “Aloha” means hello, right? Yes, and no. “Aloha” actually means “the presence of breath”; “the breath of life.” Aloha is not a word, it is a way of living and treating each other with respect and love. It implies “self-love” at its core, and “love of others” as its consequence. Hawaii is called “The Aloha State”, and it is in the state of Aloha that these islands live.

Mark Twain also spoke of the Aloha Spirit, albeit through the back door. He said:

“The native language is soft and liquid and flexible and in every way efficient and satisfactory — till you get mad; then there you are; there isn't anything in it to swear with.”

Mark went on to explain that Hawaiian was a perfect language for Sundays, but had no application the other 6 days of the week. He complained it virtually had no business doing business, commerce, technology, or trade; or did you repeat yourself, Mark? However, what Mark Twain so cleverly said is that Hawaiian was designed by a gentle and peaceful civilization that had Aloha, not Wall Street in mind.

So it was to these islands that Max dragged us. You may ask yourself, “Why not the Bronx”? It appears that grid work was necessary here, from the top of the Big Island's volcano, Mauna Kea, to the Crystal of Oneness at the Hindu Monastery located in the sacred Wailua River valley of Kauai. On these precious islands the groundwork was set for something much greater to come.

More will unfold, undoubtedly. As it does, I will keep you informed. All I can say of this journey is that it was a privilege to participate in it at all.

Until then, Aloha Nui Loa. - Diana 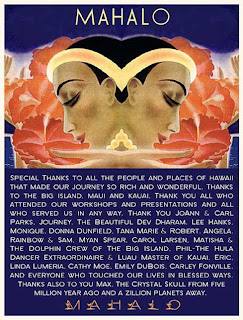