Vatic Note: If anyone has been following the ACLU, I don't believe, in reality, that Anthony Romero opposes anything Obama does, lip service only. I believe for the left, that plants have been inserted into these organizations, just like the NRA on the right. They have been taken over and coopted. Everytime you see the phrase "Obama is considering asking Congress", Just change it to "Obama and congress have been TOLD to do this" by their owners the international bankers and Israel (Joe Lieberscum, PHD in Treason). This issue is just another "frog in the slow heating pot of water" and we are not suppose to notice and as CLG, Lori Price so appropriately put it "It's the Obusha 'Friday Night Extra-constitutional Bad News Dump' -- so big, the dumping actually crossed into Saturday morning!" She does have a good sense of the sublime, doesn't she? What this is indicatiing is that our Bill of Rights has almost been completely gutted and all that is left is the first amendment and the second amendment, that was passed by our founding fathers to protect that first Amendment, so watch for that as it will be a signal that we have to get off our duffs and begin the process of claiming back our civil liberties and protections from just such tyrants as we see occupying our Government. They are still torturing that poor guy who it turns out is innocent but that is another story, and they are keeping him in serious INHUMANE CONDITIONS in a box without leg room or light.


I have to say, I had hoped Obama would not show the same inhumane soul as his predecessor, but I should have guessed otherwise when he selected the mossad agent as his chief of staff, Rahm. Obama is CIA as we have been shown after his Occidental University so called attendance and joined the CIA for work in Pakistan and Afghanistan, so what we are seeing here, is, OUR COUNTRY IS BEING RUN BY THE INTELLIGENCE SERVICES and foreign occupying agents of another country  through their banking system. Its finally coming together. I can't imagine how things could be any different than they are when you have those "perfect storm" conditions that promote the chaos and war that is going on, since both agencies and Israel are all trained to do nothing but that for their occupations and way of running their own country. Its why they will never run the world, since they lack fundamentals to do so successfully. What else did we expect.

SOLUTION: Carry a copy of the Miranda rights with you and offer them to the police to use in compliance with the Bill of Rights, and ask them to not support illegal laws and give you your rights and see if it works, then if they do not, REMEMBER THEIR NAMES and keep them hard in your mind and when its over, write them down and pass them along to everyone you know in your community along with a list of what they did in violation of their oath of office, its becoming apparent that we are going to have to do what Alexander Solzeneitzen said and that is to turn the tables back on them and make them understand what they are doing will not be a free ride and could and will cost them in the end. Then their choices become a lot harder to make than they are right now where its so easy since we are so still in shock over what we are seeing. Time to reach down into that healthy anger and begin turning the tables. Anyone associated with someone treated that way also take that info of WHO DID IT on the police force and cooperated with the tyrants and traitors and have that passed on and tell everyone to keep passing that information on and on, REMEMBER, THEY LIVE AMONG US, THEY ARE OUR NEIGHBORS AND THEY ARE NOT IMMUNE TO CONSEQUENCES FOR THEIR CHOICES IN ALL OF THIS. JUST ASK THEIR WIVES, CHILDREN, PARENTS, SISTERS, BROTHERS, FRIENDS, AND NEIGHBORS AND SEE IF THEY CAN'T TALK SOME SENSE INTO THEM.

WASHINGTON — President Obama’s legal advisers are considering asking Congress to allow the government to detain terrorism suspects longer after their arrests before presenting them to a judge for an initial hearing, according to administration officials familiar with the discussions. 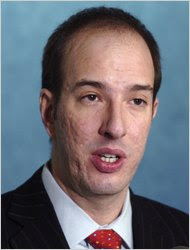 Anthony Romero, of the A.C.L.U., opposes the plan.

The latest on President Obama, his administration and other news from Washington and around the nation. Join the discussion.

If approved, the idea to delay hearings would be attached to broader legislation to allow interrogators to withhold Miranda warnings from terrorism suspects for lengthy periods, as Attorney General Eric H. Holder Jr. proposed last week.

The goal of both measures would be to open a window of time after an arrest in which interrogators could question (VN:  Torture) a(n American) terrorism suspect without an interruption that might cause the prisoner to stop talking. It is not clear how long of a delay the administration is considering seeking.

The officials, who spoke on the condition of anonymity because the proposal is still being developed, cautioned that it was not clear what the final proposal would include. Several aides to leading Democratic members of Congress said the administration had not approached their offices for detailed discussions of the matter, and the administration declined to comment on the internal deliberations.

Benjamin Wittes, a terrorism policy specialist at the Brookings Institution, said the issue of the timing of a Miranda warning was generating much more political attention because people were familiar with Miranda rights from television shows. But, he said, the need for an early “presentment” hearing is even more likely to disrupt an interrogation (VN:  Torture session) because it involves transporting a suspect to a courtroom for a formal proceeding.

“I would be very surprised if, when we see the proposal that they are cooking up, there weren’t a significant component of it that is about a window of detention,” said Mr. Wittes, who argued in favor of delaying initial hearings in an opinion column published by The Washington Post on Friday.

Anthony Romero, the executive director of the American Civil Liberties Union, assailed the Obama administration for considering such ideas. He noted that the administration of President George W. Bush, which was heavily criticized by civil-liberties groups, never proposed such modifications to criminal procedures.

The administration’s flirtation with the ideas follows the arrest last week of Faisal Shahzad, the suspect in the failed attempt to detonate a car bomb in Times Square. Federal interrogators questioned Mr. Shahzad for several hours before warning him that he had right to remain silent and consult a lawyer, citing an exception to the Miranda rule for immediate threats to public safety.

Officials have said that Mr. Shahzad waived those rights, as well as his right to a quick initial hearing before a judge, and has continued cooperating with interrogators. But, worried that suspects in future cases may not do likewise, or that law enforcement officials will be confused about the rules, the administration has decided to push for changes.

There is a federal rule of criminal procedure that requires law enforcement officials to take a prisoner to a judge for an initial hearing “without unnecessary delay.” But specialists in criminal law said it would be a fairly simple matter for Congress to pass a statute exempting terrorism cases.

But they said it would be trickier to get around a Supreme Court precedent that governs when people must get initial hearings before a judge in cases in which the police have arrested someone without a warrant. The court has ruled that such prisoners must generally get a hearing within 48 hours to ensure there is probable cause to believe they committed a crime.

Congress has no authority to override the Supreme Court’s constitutional rulings. But several legal specialists said the court might be more willing to approve modifications if lawmakers and the executive branch agreed that the changes were necessary in the fight against terrorism.

One idea, Mr. Wittes said, would be for prosecutors to ask a judge for permission to continue holding a terrorism suspect who had been arrested without bringing the prisoner to the courtroom. As a safeguard, he said, Congress could require a high-level Justice Department official to certify that delaying the suspect’s initial appearance in court was necessary for national-security reasons.

The Obama administration’s consideration of the proposal comes against the backdrop of Republican attacks for its decision to handle some terrorism cases in the criminal justice system instead of declaring the suspects to be “enemy combatants” and holding them in military detention.

Daniel C. Richman, a Columbia University law professor and a former federal prosecutor, said the administration might be considering such a bill as much for the political message it would send as for any substantive changes it would make.

“It may well be that the law could use some clarification on these points and that courts would be receptive to a more detailed framework for how to handle these cases,” Professor Richman said. “But what’s certainly true is that the public could use a signal from the administration that criminal procedure is a lot more flexible in handling terrorism cases than critics have suggested.”

In testimony before the House Judiciary Committee on Thursday, Mr. Holder emphasized that the administration envisioned changes that would affect only a small number of terrorism cases.

“We now find ourselves in 2010 dealing with very complicated terrorism matters,” Mr. Holder said. “Those are certainly the things that have occupied much of my time. And we think that with regard to that small sliver — only terrorism-related matters, not in any other way, just terrorism cases — that modernizing, clarifying, making more flexible the use of the public safety exception would be something beneficial.”