Vatic Note:   Monsanto's owners should be prosecuted for intentional assault  against humanity using food to conduct war on a soft kill basis.  GMO seeds attack our organs and its been postulated that it ensures workers do not live past 40 when their physical prowess is over, and then they do not become wards of the state, rather, corpses due to GMO seeds.

Then the state can steal the social security fund that these people paid into their entire lives.   We definitely have a bunch of psychopaths running this nation and others that they have infiltrated as well.   It appears that some action is being considered against Monsanto and I am anxious to see it happen.  Lets hope that is the case.

Monsanto to face tribunal at The Hague for 'ecocide' against humanity and the planet
http://www.naturalnews.com/052588_Monsanto_crimes_against_humanity_The_Hague.html
by: Ethan A. Huff, staff writer, Natural News, January 10, 2016
(NaturalNews) An international tribunal made up of some of the world's leading environmental and human rights groups, is set to hold the world's most evil corporation, Monsanto, accountable for its crimes against nature and humanity.

Dubbed "The Monsanto Tribunal," a cohort of scientists, environmentalists and professionals from all across the globe will put Monsanto on trial at an upcoming hearing at The Hague this fall, where the purveyor of Genetically Modified Organisms (GMOs) and chemical crop herbicides will be charged for committing "ecocide." 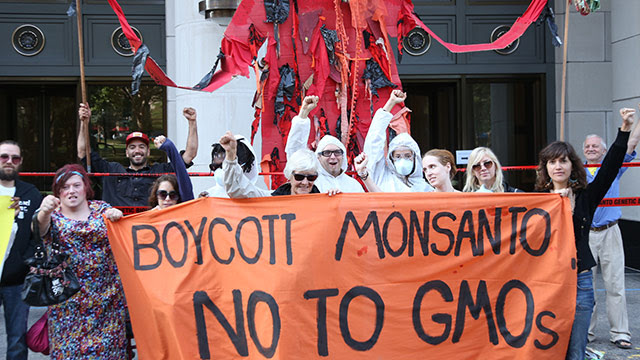 The goal of the hearing will be to lay out all the evidence against Monsanto, and come up with a concrete plan to hold the multinational corporation responsible for injuring human life and destroying the planet. The event will take place from October 12–16, 2016, with an official trial to be concluded on World Food Day.
"Recognizing ecocide as a crime is the only way to guarantee the right of humans to a healthy environment and the right of nature to be protected," reads the mission statement on The International Monsanto Tribunal's website.

Utilizing international guidelines for handling cross-border criminal activity, the Tribunal will assess the full extent of Monsanto's improprieties and form a solid game plan for prosecuting the chemical giant in international courts.

"The Tribunal will rely on the 'Guiding Principles on Business and Human Rights' adopted at the UN in 2011," the statement adds.

"It will also assess potential criminal liability on the basis of the Rome Statu[t]e that created the International Criminal Court in The Hague in 2002, and it will consider whether a reform of international criminal law is warranted to include crimes against the environment, or ecocide, as a prosecutable criminal offense, so that natural persons could incur criminal liability."

Monsanto's very existence was built on deception, manipulation and lies

Endorsed by the Organic Consumers Association (OCA), IFOAM International Organics, Navdanya, Regeneration International (RI) and Millions Against Monsanto, the Tribunal represents one of the first attempts at the international level to bring Monsanto to bear for its criminal activity.

Besides those injured or killed by Monsanto's actions, the flood of GMOs and crop chemicals into food supplies throughout the world has led to severe planetary changes, not the least of which is climate change resulting from chemically-induced disruptions to the natural carbon cycle.

"The time is long overdue for a global citizens' tribunal to put Monsanto on trial for crimes against humanity and the environment," says OCA head Ronnie Cummins.

"We are in Paris this month to address the most serious threat that humans have ever faced in our 100-200,000 year evolution—global warming and climate disruption."

Many people still falsely believe that Monsanto got to where it is today through honest scientific innovation and sound agricultural solutions that have helped both farmers and consumers achieve better food security. But this is hardly the case.

Monsanto and other key biotechnology players illicitly manufactured their own success by manipulating regulators, falsifying research and bullying politicians and health policy leaders into bringing GMOs and crop chemicals to the market without any evidence of safety or necessity.

Andre Leu, president of IFOAM and member of the RI Steering Committee, told the press that Monsanto's entire existence has been predicated on its effectiveness in "lobbying regulatory agencies and governments ... resorting to lying and corruption ... financing fraudulent scientific studies ... pressuring independent scientists ... [and] manipulating the press and media."

"Monsanto's history reads like a text-book case of impunity, benefiting transnational corporations and their executives, whose activities contribute to climate and biosphere crises and threaten the safety of the planet," Leu added.

To learn more about the Monsanto Tribunal, visit: Monsanto-Tribunal.org