46,000 Americans killed each year by drug overdoses... most of them FDA-approved Big Pharma opioids... while medical system suppresses HEMP cures that render many painkillers obsolete

Vatic Note: Just think about that number.  Soft kill is becoming much more effective than hard kill with guns and military weapons and no resistance from the victims.   This should come as no surprise to any of us.  Aleopathic drugs have been a curse upon the American population for a long time and why?

Because the FDA does not do its due diligence when it comes to drug approvals, and protecting the American public, and that is because the FDA is a revolving door to the drug companies and Monsanto.  They switch jobs often.   Some officer of the drug company gets appointed to the FDA board, and then goes back to work for the company they are suppose to regulate.  Now, how does that make any sense??

That intentional act of ignoring the test results of many of these drugs, the side affects, and the kill rate, should result in those in the FDA sitting in a court room under trial for first degree murder of Americans and others who take the drugs that the FDA approves.   Instead they go after natural remedy manufacturers whose natural remedies, kill no one and have no side affects.   Further, they ban them if they actually work, like Marijuana and the orgon machines.

Nearly half a million Americans died from legal drug overdoses in just a 14 year period and yet not a single one of those drugs are banned.  So someone please explain that, will ya?   Depopulation?  Just like GMO seeds???  Yup, soft kill is on the march and now they want to put cell towers in residential neighbourhoods, to add insult to injury.  We have a LOT TO THINK ABOUT IN THE NEXT FEW WEEKS.  I really like the way Natural News covers our health issues and exposes the underbelly of the "beast".   Time is drawing near.  Time to buy a gas mask for their DNA altering chemtrails and oxygen supplements as well as arms and ammo.


46,000 Americans killed each year by drug overdoses... most of them FDA-approved Big Pharma opioids... while medical system suppresses HEMP cures that render many painkillers obsolete
http://www.naturalnews.com/053168_drug_overdose_deaths_opioids_Big_Pharma_painkillers.html
By Mike Adams, Health Ranger,
(NaturalNews) According to the FBI, around 15,000 people are murdered in the United States each year. Terrorism incidents like the San Bernardino shootings add another few dozen fatalities, and war operations in the Middle East bring additional casualties into the mix.

Yet the number of Americans killed by FDA-approved pharmaceutical drug overdoses dwarfs all those fatalities combined. According to the CDC, there were 43,982 drug overdose deaths in 2013, and over half of those were caused by FDA approved prescription pharma drugs (opioids). 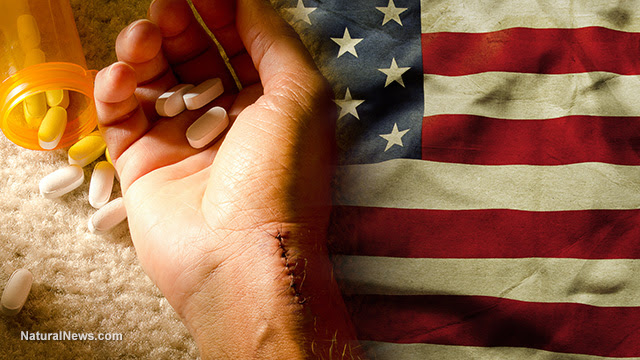 From the CDC's drug overdose page:

From 2000 to 2014 nearly half a million Americans died from drug overdoses. Opioid overdose deaths, including both opioid pain relievers and heroin, hit record levels in 2014, with an alarming 14 percent increase in just one year, according to new data published today in CDC's Morbidity and Mortality Weekly Report.

The most commonly prescribed opioid pain relievers, those classified as natural or semi-synthetic opioids such as oxycodone and hydrocodone, continue to be involved in more overdose deaths than any other opioid type. These deaths increased by 9 percent (813 more deaths in 2014 than 2013).

Once you realize how much money is being made from patented painkillers, you instantly understand why the pharmaceutical industry conspires with the FDA to suppress the legality of hemp and its astonishing healing (VN: and painkilling properties....) properties.

The powerful medicines found in medicinal hemp, if legalized nationwide, would make at least a dozen Big Pharma painkiller drugs obsolete. It would also treat cancer, epilepsy and a long list of other conditions that currently generate billions of dollars in profits for the corrupt pharmaceutical industry.

Even as the U.S. government claims street drugs are so dangerous, the truth is that Big Pharma kills far more people than street drugs do, and that's not just in the "overdoses" category, either. All told, the pharmaceutical industry likely kills at least 100,000 Americans each year and probably many more.

See PharmaDeathClock.com for a real-time count. Learn the full story on natural medicine in the Natural Medicine Summit that goes live on March 14.

Click here for my full podcast on this subject or listen below: