U.S. Electricity Bills Keep Rising Despite SHARP DECLINES in cost of fuel used to produce it

Vatic Note:   Does SMART METERS ring a bell?  They are dual purpose meters.  It records the energy you use, but it also spies on you as part of the paranoid globalists psycho plan to use a global smart grid to spy on us.  And as  usual they want us to pay for their insane paranoia.   Screw them.   Lets make our own energy and generate it and in the long run we will save a ton of  money.  This is why they have raised our electric rates outrageously, to pay for the smart meters that we refuse to pay for installing.  iT WILL ALSO BE SAFER, SINCE THESE METERS EXPLODE AND CAUSE FIRES AND DEATH.

These evil demons never pay for anything out of their trillions of stolen dollars from everyone, instead they make us pay for our own imprisonment, and destruction.  That is perverted and insane, and that is proven almost daily with these evil creatures who are not human.

Natural Gas isn't much better either.  In fact, even water has gone up and now utilities are almost or more than our rent.  This was one of the prongs for making us into slaves without it being obvious.  We have to work all adults in the family, or hold down two jobs just to pay to live.  That is called slavery.  Well, they can kiss my booty, since the way I will save money is by NOT PAYING MY INTEREST PAYMENTS ON DEBT I DID NOT ACCRUE TO THE ROTHSCHILDS. THEY CAN COLLECT THEIR INTEREST PAYMENTS FROM THEIR PUPPETS IN OUR GOVERNMENT.

Families in New York are paying 40% more for electricity than they were a decade ago. Meanwhile, the cost of the main fuel used to generate electricity in the state—natural gas—has plunged 39%. 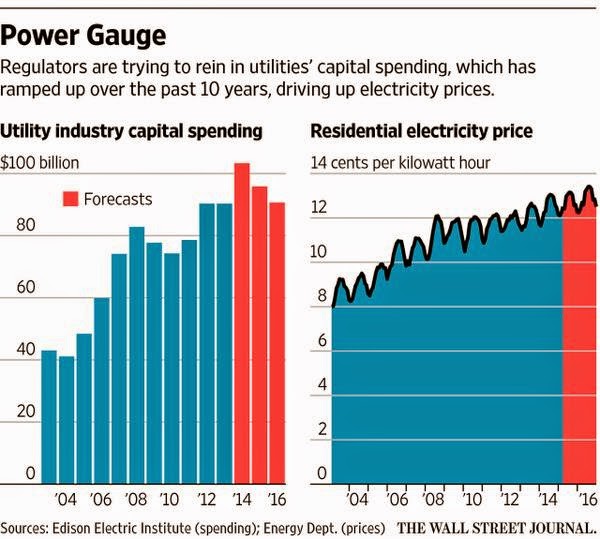 poured $17 billion into new equipment—from power plants to pollution-control devices—in the past decade, a spending surge that customers have paid for.
New York utilities’ spending plans could push electricity prices up an additional 63% in the next decade, said Richard Kauffman, the former chairman of Levi Strauss & Co
image: http://images.intellitxt.com/ast/adTypes/icon1.png

. who became New York’s energy czar in 2013. It’s “not a sustainable path for New York,” he said. New York is no outlier. Capital spending
image: http://images.intellitxt.com/ast/adTypes/icon1.png

has climbed at utilities nationwide—and so have their customers’ bills. http://www.wsj.com/articles/utilities-profit-recipe-spend-more-1429567463

Read more at http://investmentwatchblog.com/u-s-electricity-bills-keep-rising-despite-sharp-declines-in-cost-of-fuel-used-to-produce-it/#gt6zMSXAeOeeGCfe.99
The article is reproduced in accordance with Section 107 of title 17 of the Copyright Law of the United States relating to fair-use and is for the purposes of criticism, comment, news reporting, teaching, scholarship, and research.
Posted by Vatic Master at 1:00 AM