Watch How To Stand Your Ground: Jury Nullification Across The United States.

***Fundraising time:   We still have a balance on our deficit of $180, thanks to some donors.  We appreciate the support and the message that the work "must go on".  We are so close to the goal, that I have faith that we will make it.

Now if everyone just sends in $5 or $10, til we make up the rest,  then we can continue to give it all we have to give.  Thank you all for your support and may God Bless and keep you prosperous, safe and healthy.  The donation button is off to the right of the blog, which is pay pal.  Thank you again from the bottom of our hearts.

Vatic Note:  We just recently had a case in Texas where a police officer was shot by a home owner on a no knock break in with no warrant etc.   The Homeowner shot the police officer believing he was a burglar and was arrested and charged with murder.

After hearing all the evidence in the case, the jury did a "jury nullification" by finding the defendant "Not Guilty", explaining that the Prosecution did not prove that the Defendant knew the intruder was a police officer.

In the past it was illegal for police to conduct no knock searches as a violation of the citizens 4th amendment rights and now we have both citizens and police officers dying under the policy that "no knock" searches are legal.   Here is the link if you wish to read about it and get an education so you can know your rights and options as a juror or even as a defendant since no knock searches are becoming the norm.

I believe its going to get worse before it gets better, but as long as we use the system as intended, we could very well prevail, if enough of these evil ones are thrown in jail for a goodly number of years.  I call it a "deterrent"

Watch How To Stand Your Ground: Jury Nullification Across The United States.
http://politicalvelcraft.org/2014/10/10/watch-how-to-stand-your-ground-jury-nullification-across-the-united-states/
by Admin, Political Velcraft, October 10, 2014 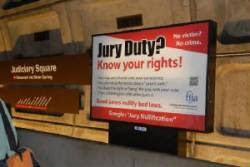 Jury Rights activists in the Philadelphia area recently encountered resistance in front of a local courthouse, when they were attempting to educate their neighbors about jury nullification.

Among the activists was James Babb, an organizer behind the recent push to install jury nullification billboards in cities throughout the US.

For those who don’t know, jury nullification is basically the right for any juror to not only judge the facts of the case, but to also actually judge the validity of the law itself.

This means that if a jury feels that a defendant is facing an unjust charge, they actually have the right to rule in the defendant’s favor, even if they are technically guilty under the court’s standards.

People charged with victimless crimes, for example, could be set free, and the laws could be expeditiously changed. If a pattern of acquittals develops in response to repeated attempts to prosecute a statutory offence, this can have the de facto effect of invalidating the statute.

The federal government, and individual state governments are terrified about this concept becoming more mainstream.

This week, James and Andrew Rumbold went to a local courthouse in Bucks County, Pennsylvania, where they peacefully handed out flyers informing people of their rights when on a jury.

JURY’S POWER OF NULLIFICATION IS THE U.S. REPUBLIC’S JUSTICE!
During this week’s outreach effort, James and his friends were approached by a courthouse employee who insisted that they were not allowed to hand out flyers where they were standing. The employee was identified as Christopher M. Dailey, Director of Bucks County “Emergency Services” Security Division.

Next Dailey went inside to call the police. Moments later police arrived on the scene, and knowing that the activists were armed with cameras, the officer was very polite with them. After refusing to give the officers his ID, James continued to insist that he had every right to hand out the flyers on public property, because he was not technically protesting, but simply educating the public about what laws are in existence.

The officer stepped aside for a few moments and eventually came back to inform the activists that there was in fact no law on the books preventing them from doing what they were doing.

THE CONSTITUTIONAL RIGHT TO RESIST A ‘COLORED’ DUTY TO SUBMIT!
Related Articles:
POLICE STATE STOPPED COLD, DEAD COLD ~ TEXAS GRAND JURY NULLIFICATION: NULLIFIES MURDER CHARGES AGAINST CITIZEN WHO SHOT A POLICE DEPUTY DURING BREAK AND ENTERING RAID OF HIS RESIDENCE!
The article is reproduced in accordance with Section 107 of title 17 of the Copyright Law of the United States relating to fair-use and is for the purposes of criticism, comment, news reporting, teaching, scholarship, and research.
Posted by Vatic Master at 1:30 AM