Music – Conspiracy To Detune Us From the Earth/cosmos's Natural 432Hz Harmonics? Solutions!

*** Fundraising:  We, here at Vatic Project, want to take this time to wish you a very Merry Christmas and a very Happy and prosperous New Year.  We also hope you had a fabulous Thanksgiving this year.  I know this will sound a bit off, but I have a good feeling about 2014.  Lets hope I am right.

We also have begun our 15th of the month fundraising in order to continue on with our work on this site.   Our deficit is, as usual, the $300, and we have a long end of the month so hopefully it will be long enough to ensure our success in working together with our readers in raising what we need to continue this journey  at this critical time.

If you have benefited in anyway from our blog, we hope  you will contribute to our continuation into 2014, by clicking on the pay pal button off to the right of the blog.  We appreciate very much the kind words of support we have gotten from many of our readers, and commenters,  and hope you will continue to contribute to our growing body of information by your comments.   Bless you all for your support over these almost 4 years.  No matter how it turns out, I truly believe we have all made a difference.  Thanks again.

Vatic Note:  This is very interesting.  Why?  Because  there are other areas of our universe that also affects our connection to the divine, which the powers that be are trying to change.  We have posted many blogs on here about their messing with our DNA and also ask yourselves, why the foreign occupied gov, has ordered the collection of DNA of all new born babies?

Lets look at a list of those things they are using which in the end will affect our DNA and thus the God Gene that is our spiritual identity that makes us unique, independent thinking, creative, and compassionate, loving beings:

1. GMO - genetically modified organisms in our plant food, now moving into farm raised salmon,  beef, chickens, etc.  Such food has an impact on our DNA negatively based on what we eat. Why does Gates, through his company, Monsanto, fight so hard to push these frankenfoods onto the people of the globe?
2. Chemtrail dumping with not only toxic chemicals, but various disease triggers, cancer cells, recently DU poisoning, heavy metals, such as aluminum nitrate that eats the cortex of the brain, which is our higher brain and the wormhole to our consciousness.  That is a short list of the many types of Zombification materials being used to deprive us of our humanity.  They are also creating a change in the content of our air, which is depriving many of us of our oxygen needed to heal, feed, repair and sustain human life "as we know it".  Chemtrail dumping is a "WMD" and should be treated that way.  Planes should be shot down.
3.  Bioweapons, created for political purposes and genome specific.  Again an attack on our DNA, as well as our health.  This one they even wrote up in the "Pax Americana" paper by the neocon/neolib think tank called "The New American Century", which actually has nothing to do with America and should rightly be called "Pax Rothschild"  written by the "The New 'Israeli' Century" since those that wrote the document are dual israeli citizens, both right and left.  Then 89 "microbiologists" right after 9-11, were murdered, one of whom had identified, through DNA sequencing the bioweapons facility that the anthrax bioweapon came from.   All the microbiologists killed had "DNA Sequencing" expertise, and could identify the facilities of any bioweapon made.  That is why they had to go.
4.  Fluoride and lithium in our natural fresh water which is rapidly disappearing and what is remaining of our fresh water is now legally been turned over to the military corp of engineers, who has no authority under the constitution to be messing with anything under state control or local control.
5.  Massive Chemicals in our "prepared" foods.
Bans on growing real food naturally in our yards,
Ban on raw milk products raised organically,
BPH and other chemicals, antibiotics, hormones, etc inserted into our meat, and other ingested food products. These are also used to attack and chemically change our DNA.
6.  Haarp and other advanced weaponry being used to disrupt our sleep during the most critical time of sleeping which is from 1 am to 3 am when we are most needing to heal our bodies, and mental scars from the days various assaults upon us.  This critical time is when we are connecting, at the deepest point in our sleep with spiritual healing sources called the God source.  Dreaming is a form of cleansing for the body, mind, and spirit and that occurs at the deepest part of our sleep.   This is just a small sampling of what they are doing while keeping us distracted with bogus boogie men.... like "Right vs left",  "Muslims vs Christians".  etc.  NO CIVIL WAR, NO THIRD WORLD WAR EXCEPT AGAINST THE INTERNATIONAL ZIONIST BANKERS in each and every country.

Imagine what happens when you suffer a sleep interrupt around that time or before when we are suppose to be moving deeper into our sleep, but cannot, thus we either stay in that state or wake up.  I can confirm that is happening when I did a general survey of my neighbors and found them to be experiencing what I was also experiencing.  Because we know about it now, it loses some of its effectiveness on mind control.
7.  The use of IPODs, Digital programming into our digital TV's, and other high tech tools used to "reprogram" the unsuspecting once they are filled with all the chemical changes and DNA mutations used to affect our brains and thus lay the foundation for mind and emotional control by the foreign perverts running our society.... as JFK warned us about before they assassinated him.
8.  The use of communications tools to brain wash, mind control, alter DNA and change history. Some examples are movies,  TV productions,  Newspapers, magazines, publishing houses.   Example:  Obama's biography was written by a handler working for one of the zionist publishing houses,  same with Sarah Palin.  See?  No difference between the parties anymore.

Now Add in this below and they have covered just about everything that makes us human and everything that can change our DNA and lose that humanity, and if they control history, then our period of existance on this planet will be lost forever.   That would be a serious crime.

We must change all this, and with this below we can do it by  refusing to buy or listen to their controlled music and go back to the age where we were hertz'd correctly which was the 40's, 50's and early half of the 60's music.  Visit our list on the right where we have put up a link to "UP CHUCKY" which is a internet juke box of old songs going all the way back to the 40's that you can select from while you are reading the net.

Its a start to thwarting their efforts to control us and to change our DNA.   Heck email me and I will tell you how to counter some of these above.  I don't want to do it in the article because they can then take those suggests and find a way around them, and I don't want to help them do that.

Most music worldwide has been tuned to 440 hertz since the International Standards Organization (ISO) endorsed it in 1953. The recent rediscoveries of the vibratory / oscillatory nature of the universe indicate that this contemporary international concert pitch standard may generate an unhealthy effect or anti-social behavior in the consciousness of human beings. 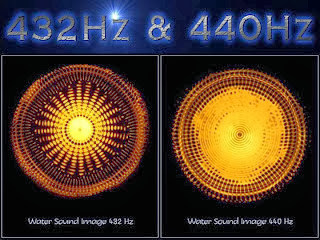 A=432 Hz, known as Verdi’s ‘A’ is an alternative tuning that is mathematically consistent with the universe. Music based on 432 Hz transmits beneficial healing energy, because it is a pure tone of math fundamental to nature.

There is a theory that the change from 432 Hz to 440 Hz was dictated by Nazi propaganda minister, Joseph Goebbels. He used it to make people think and feel a certain manner, and to make them a prisoner of a certain consciousness. Then around 1940 the United States introduced 440 Hz worldwide, and finally in 1953 it became the ISO 16-standard.

Silent Weapon of a Quiet War

What is 440 Hz? 440 Hz is the unnatural standard tuning frequency, removed from the symmetry of sacred vibrations and overtones that has declared war on the subconscious mind of Western Man. In a paper entitled ‘Musical Cult Control’, Dr. Leonard Horowitz writes: “The music industry features this imposed frequency that is ‘herding’ populations into greater aggression, psycho social agitation, and emotional distress predisposing people to physical illness.”

You just have to go out in the street and take a look around. What do you see? School kids, young adults on their way to work, a woman pushing her baby in a pram, a man walking his dog – and what do they all have in common? iPods or MP3 Players! Ingenious, isn't it? “If you want to find the secrets of the universe, think in terms of energy, frequency and vibration.” -Nikola Tesla

The powers that be are successfully lowering the vibrations of not only the young generation but the rest of us as well. These destructive frequencies entrain the thoughts towards disruption, disharmony and disunity. Additionally, they also stimulate the controlling organ of the body - the brain - into disharmonious resonance, which ultimately creates disease and war.

The difference between 432 Hz and 440 Hz. Hear it, understand it. “This unnatural standard tuning frequency (440 Hz), removed from the symmetry of sacred vibrations and overtones, has declared war on the subconscious mind of Western Man.” -L. C. Vincent.  The Hidden Power of Universal Frequency and Vibration Frequency and vibration hold a critically important yet hidden power to affect our lives, our health, our society and our world.

The Science of Cymatics

The science of Cymatics (meaning the study of visible sound and vibration) proves that frequency and vibration are the master keys and organizational foundation for the creation of all matter and life on this planet. When sound waves move through a physical medium (sand, air, water, etc.) the frequency of the waves has a direct effect upon the structures which are created by the sound waves as they pass through that particular medium.
To better understand the power of sound frequency, watch the amazing video below. “If one should desire to know whether a kingdom is well governed, if its morals are good or bad, the quality of its music will furnish the answer.”
-Confucius Sources: Attuned Vibrations (attunedvibrations.com) The Importance of 432 Hz Music (omega432.com) The Rockefeller Foundation’s War on Consciousness through Imposition Of 440 Hz Standard Tuning (medicalveritas.org) Water Sound Images (watersoundimages.com) The Missing Secrets Of Nikola Tesla (knowledgeoftoday.org)

Music has a hidden power to affect our minds, our bodies, our thoughts, and our society. When that music is based upon a tuning standard purposely removed from the natural harmonics found in nature, the end result may be the psychic poisoning of the mass mind of humanity.

As Kymatica Documentary says, the rediscovered knowledge of the science of sound shows that sound is something more than mere vibratory signals, not only does sound interact with life but it sustains and develops it.

It acts as a conduit of conscious intent between people, societies and entire civilizations. Read More: http://www.whydontyoutrythis.com/2013/08/440hz-music-conspiracy-to-detune-good-vibrations-from-natural-432hz.html | Follow us on Facebook: http://www.facebook.com/whydontyoutrythis
The article is reproduced in accordance with Section 107 of title 17 of the Copyright Law of the United States relating to fair-use and is for the purposes of criticism, comment, news reporting, teaching, scholarship, and research.
Posted by Vatic Master at 1:00 AM

Vatic Master: Ecellent article. The Hip HOP and Rap Music is bad as well as even New Country, The IPODs are runniung wild now...see them all over the place....Cell Phones really do something to brain....