Update! A Visitor Behind Ison? Something Positive for a change of Pace -

Vatic Note:  I choose to see the existence of a large object behind Ison as something positive. Why? Because the Evil ones are starting to act like real humans again.  Notice the tenor of the dialogue in the MSM, notice the Iran Agreement and the anger of Israel and the courage of Kerry in standing up to them.  That could only be a solid indication that the evil ones are too late in stopping what is happening  with potential rescuers on the way.  Or we are being distracted from something else with all this news of Ison.

Well, it appears they have found me at this location, since they are seriously messing with my posting.  Lets see how fast this will go once I  bring this up.  They hate it when I tell you what they are doing.  Ahaaa, its going a lot faster now.  Thanks for being there for me when they do this.  It helps to get them off my case. We must be interpreting this close to the reality.

I must also say that its unwise to believe anything NASA says or shows since they did the same thing very effectively about the moon landing that we now know never happened.  It was a Stanley Kubick movie, and his payoff was unlimited budget and control to do the movie he has always wanted to do which was "Eyes Wide Shut"  that exposed the elite globally practicing their satanic occult rituals and invoking the demons to do harm to those who resist them.

The PTB tried to stop the distribution of the film for showing, but they had a contract with him and they could not afford to go to court for everyone to know.  So we know they are capable of manufacturing just about anything to do with space, that they want. Lets not forget who controls Hollywood and what a close relationship Hollywood has with the Pentagon and intel services as we have seen many times before.

So, be optimistic, but cautious and discerning where anything controlled by the Zionists internationalist bankers is concerned.   If nothing else it shows just how far away from their goal they are and how nervous about it they are getting, for whatever reason.

Proof ISON Survived & WTF Is That Giant Thing Following Behind It? (Video)
http://beforeitsnews.com/space/2013/11/update-proof-of-ison-survived-wtf-is-that-giant-thing-following-behind-it-video-2470790.html
by Wake Up America,  November 28, 2013


The headline comes directly from the title of the newest ThorNews video and it is a serious question they are asking.


We have been watching Comet ISON all day long and after perihelion, experts, amateur astronomers and those watching the comet all seem to be seeing different things. Some say ISON disintegrated, others says she is whole and intact and others wondering still, if ISON disintegrated where is the debris headed.


Well, according to ThorNews, there is indisputable proof ISON survived and there is something following behind.


Watch and see if you agree after seeing their proof.

(VN: sorry, the blog author did not provide any info on the video so i could pass it on to you.  I even tried to google for it and found nothing, so take that for what its worth as well. It means that you should be suspicious of the whole issue, unless she fixes it and gives us the video embedding or the link directly to the video. )

Via the video details:

NASA & ESA & Professional Astronomers declared Comet c/2012 s1 ISON DEAD after Perihelion. Then, the Stereo Lasco and SECCHI cameras started to show something emerge. Dirty Snowball dust? Dragon Skull? Who knows but as spaceweather said. SOMETHING survived. It looks big and the latest reports are that it is brightening.

Plus! WTF is that crazy unidentified shape thingy entering frame left as ISON leaves on frame right!!?!? I’m sure it’s a cat galaxy or sequester swamp gas or an angelic artifact but I would like to know, ya know? Awesome!! 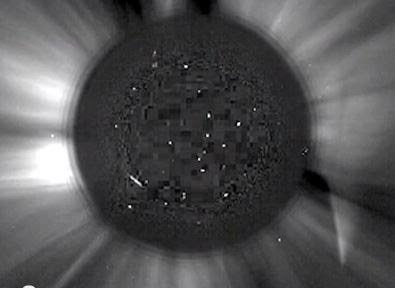 The article is reproduced in accordance with Section 107 of title 17 of the Copyright Law of the United States relating to fair-use and is for the purposes of criticism, comment, news reporting, teaching, scholarship, and research.
Posted by Vatic Master at 11:53 AM