*** Fund Raising status - Our deficit is still at $90 today which is Sunday. That leaves us just 5 days left to achieve our goal.  Just to remind you, that we wish to continue to do this work, if it can be supported without hurting anyone. However, we leave it up to you to decide when we have finished our mission here.

Times are tough, and we hate asking.  I wish there were another way to do this, but alas, there is not.  We must ask those that have benefited in anyway from our work, to help, if they can afford it, to support it by donating on the Pay Pal button off to the right side.

We are deeply appreciative of those who have already contributed to where we are now and we also appreciate all other types of support we have received from our many readers, such as in the comments section.   Bless you all for your caring and courage....in these uncertain  times.

Vatic Note: Well, finally, here it is. Senator Lugar just showed his deep involvement with these statements since he knows full well Al Qaeda does not exist. Any AQ is funded, supported and works for the CIA and Mossad. I wondered when we would get down to the bottom line that all these distractions were covering up. I have been waiting on this since the very first microbiologist was killed  and I tracked them over the years as they were murdered, suicided or heart attacked and that is a huge percentage of those with that background and expertise.  I am just wondering about the LA recent pandemic of TB that was announced found in the poor district of LA near that hotel in a previous  blog where a dead body was found in a water tower.

Lets not forget Obama's involvement in the election problems Kenya had the year Obama took office. And now the coalition gov spokesman was Obamas cousin and candidate that was foisted after the election, onto the kenyan people through violence and then negotiations. If we are that tied into that country, than this lab could mean a lot more than appears on the surface.

After reading the link above about Obama's involvement, please watch this video. Since all of this article below should be read in the CONTEXT OF THIS INFORMATION.... Did the US/Israel use kenya to cover for them in developing the bioweapon they plan on using against the world??? This video toward the end shows you Mr. Olinga that Obama helped overthrow the real duly elected gov.  Is this why???

Even though I knew since the first anthrax attack right after 9-11, that they intended to do us in with bioweapons,  I still was not sure until more and more of these microbiologists were murdered, etc and my belief then grew to realize that, plus nukes were to depopulate the planet   in a rapid manner with minimum impact on the satanist evil ones doing this. DNA SEQUENCING IS HOW THESE MICROBIOLOGISTS CAN TRACK WHICH BIOWEAPONS FACILITY THESE BUGS COME FROM. And they have to be tracked for those dealing with them so the DNA sequencing is important to even the satanists for that reason. First they tried the vaccines and that fell apart almost immediately because of Baxters Faux pas.

After that no one will take the vaccines. Its their phoney pretending about worrying about it that really galls me. They have their underground facilities for themselves so their worry is bogus. I believe they are just trying to decide if their little pets are ready to be thrown into the population and have it work. STock up on immune building products to strengthen your system. Its also why I believe the bees were under attack by that virus created by Israel, (read about half way down**) since raw unprocessed, unfiltered Honey is natures most potent antibiotic along with natural and unradiated cinnamon, believe it or not. Remember, the workers in the cinnamon factory in europe were the ones spared from the Spanish flu killer virus that caused a pandemic. Stock up on natural cinnamon at your local organic store.

"The only pathogen found in almost all samples from honeybee colonies with CCD, but not in non-CCD colonies, was the Israeli acute paralysis virus. It was found in 96.1 percent of the CCD bee samples."
So there is a lot more to all of this than it appears on the surface. 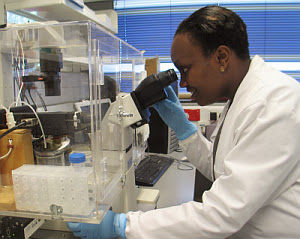 Concerned about the threat of biological terrorism, a powerful US senator will lead a team of high-level Pentagon officials on an inspection tour of Kenyan germ laboratories next week.


The labs to be inspected are designed for the study of infectious diseases. Work to develop treatments and to help prevent outbreaks also takes place at these facilities.But Pentagon officials warn that the Kenyan labs have not been sufficiently secured against terrorism threats.

“Deadly diseases like Ebola, Marburg and anthrax are prevalent in Africa,” Senator Lugar said in a statement announcing a trip that will take him to Uganda and Burundi as well as to Kenya.  (VN:  That is why the traitors selected that place.  The Ukraine didn't work, so now they switched  the new false flag to Obama's influenced officials at the top of that government.)


“Al-Qa’ida and other terrorist groups are active in Africa, and it is imperative that deadly pathogens stored in labs there are secure.

“These pathogens can be made into horrible weapons aimed at our troops, our friends and allies, and even the American public,” the senator added. “This is a threat we cannot ignore.”

Mr Lugar said he has been told by Pentagon chief Robert Gates that the inspection tour will help ensure that the governments of Kenya and Uganda work closely with the United States to secure the labs.The US delegation is scheduled to arrive in Kenya on November 16. A list of the sites the Americans will visit has not been released.

Source
The article is reproduced in accordance with Section 107 of title 17 of the Copyright Law of the United States relating to fair-use and is for the purposes of criticism, comment, news reporting, teaching, scholarship, and research.
Posted by Vatic Master at 1:30 AM