Stalin gives Russian land to Jews (Khazars) to Settle as their own.

Vatic Note:  Now how is this possible?  We were told through the traditional propoganda machine that Stalin hated Jews, and yet he killed more Christians with no evidence of having killed Jews/khazars. However, later because they made him mad, he forced them into forced slave labor (sound familiar?)  But he still would not do away with them as he did the Christians as you will read in the link above. However, some did die from the back breaking forced labor as did other Russians of different nationalities.  This is a part of history I did not know and found it fascinating.  I hope you learn something from it as well. 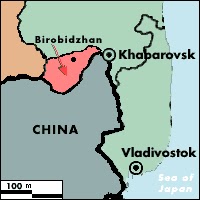 The concept of a land for the Jews of the former Soviet Union came to fruition in the establishment of an autonomous region, Birobidzhan. What happened to it and its brief history is really not amazing as we look backwards in time. We might just have expected it to turn out as it did.
Birobidzhan is an area in the southern part of the former Soviet Far East bordered by the river Amur which constituted the border between the Soviet Union and Manchuria. With an area of 34,000 square kilometers, Birobidzhan is larger than Holland and Belgium combined, or simply put, larger than the present borders of Israel.

The climate is cold and dry in the winters, and rainy in the summers. The area is rich in natural resources, containing coal, iron, tin, copper, asbestos and gold. In 1929, 53% of the area was covered with thick virgin forests, 16% were swamplands, and 14% were meadowlands.

The idea of colonizing this territory with Jews first arose in the 1920's, when the Soviet leadership and its Jewish agents were seeking some solution to the grave economic problems of the Jewish population. During the first five years of the Bolshevik rule, various attempts were made to settle Jews on land in various settled areas. Originally the plan was to settle the Jews in the Ukraine and the Crimea, but local opposition made the governmental committees look elsewhere. Finally Birobidzhan was chosen.

On March 28, 1928, the Central Executive Committee of the Supreme Soviet declared that Birobidzhan was set aside for Jewish colonization. The proclamation was followed by publicity encouraging Jews to take advantage of this opportunity. Approximately 43,000 Jews moved there between 1928 and 1938, however only about 19,000 actually stayed there.

The project received enthusiastic support from Jewish Communists and the Yiddishists and even a few Zionist gave support. Committees were established to raise money from the United States, Argentina, and even Palestine. Some 1200 non-Soviets actually immigrated there to live in this new Jewish Autonomous Region.

Although official Soviet ideology denied the nationality of the Jews, yet Birobidzhan was supported for several reasons. One reason was to win support from the West for the Soviets humane policies. Another was to bolster the border region near China. A third reason was to offer the Jews a Soviet alternative to Zionism.

In the mid 1930's, the area was hailed as a growing center of Yiddish culture. Jewish artists were encouraged to settle there. Plans for a library, a Yiddish school system and even a Yiddish opera were made. Settlements were built and the Yiddish life was budding in Birobidzhan. Yiddish and Russian became the official language and even street signs were in both languages! However, Judiasm, as a religion was not taught, and its practice was not encouraged, for Communist Russia did not believe in religion.

In late 1936, all of this came to a crashing halt. Stalin began his infamous purges. The entire region was declared out of bounds for normal citizens and the NKVD was given control of it. Committees and organizations that supported Birobidzhan were abolished; their leaders were liquidated. Yet the Yiddishists continued to hope for a continuation of their Yiddish cultural dream.

After World War II Jewish immigration to the Jewish Autonomous Region picked up. Between 1945 and 1948 the total Jewish population was about 30,000. There began a cultural advance in the Yiddish press, theater, and literature. Hopes ran high for a Yiddish Socialist Soviet Republic. However this blossoming of Yiddish culture was soon nipped in its bud as almost every Jewish writer and politician were arrested.

They were convicted of subversive activity, trying to make a national culture other than that of the official Soviet culture. The sentences were harsh and penalties were always enforced. Most of the detainees were sent to Siberia to work as Stalin's slave labor force until they died from hard work or until finally that infamous villain, Stalin, died. Most were eventually released from captivity after spending long hard years in forced labor and re-united with their families, but the revival of Yiddish life in Birobidzhan was dead.

The dream of revival of the Yiddish culture in Birobidzhan died a hard death. The name still exists on some maps, but no one believes that there is a Jewish Autonomous Region anymore.

Fortunately we Jews now have our own country, Israel, with our new dynamic culture that blends the European and S'fardic cultures, the religious and secular lives in a throbbing and living example to G-d's desire that His children return to His chosen homeland, and not make one in another location.