2nd UPDATE: 8:22 pm -  1. Tsunami Warning Center Raises Magnitude To 9.1,  2. Emergency declared at two Japanese nuclear plants, radiation levels over 1000x.   Interviewee said there were three nuclear plants shut down.   Go to link and watch news report on the nuclear plants and an interview with the wife of one of the workers in one of the plants.  That interview was even more interesting than the news report. . She described the quake as not being one that was normal, it was different.  Sounds like HAARP to me.

UPDATE VATIC NOTE: The alert for Guam, Taiwan, Australia and New Zealand has been lifted. How ever there is a tsunami warning for both russia, parts of Alaska and the central and northern coasts of california and oregon as well.  It appears their control over the destination of HAARP is pretty good after all.  All other areas in the indonesia group were hit but no damage with small waves. Japan so far has been hit the very worst, see video below.  Don't forget they are a first world economy as we are or were. So it makes sense they would be a target.   There are two additional videos at the first link scattered throughout the article that you might want to see.  I could not get the embedding code in order to put them up here, so you will have to go there to see them.   Its worth the trip.  Someone needs to see what HAARP charts look like before, during and after the earthquake.

Contributors Note: A major tsunami has struck northern Japan after a large earthquake rocked the capital of Tokyo. Cars, trucks, houses and buildings have been swept away by a 13ft wave in Onahama city, in Fukushima prefecture. And it is feared a tsunami of up to 32ft could strike the country's north eastern coast near Miyagi prefecture, closest to the epicentre of the 8.8 8.9 magnitude quake. The Pacific Tsunami Warning Center in Hawaii also said a tsunami warning was in effect for Russia, Marcus Island and the Northern Marianas. 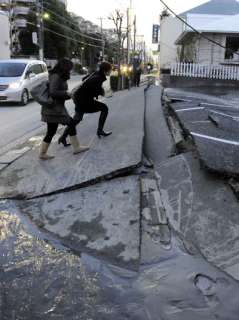 Pedestrians in the town of Urayasu outside Tokyo walk over a road collapsed by the quake.

A 33ft tsunami is feared to have killed hundreds of people as it swept over Japan's northeastern coast after the country's biggest earthquake on record.  (see video:  must watch)

The 8.9 magnitude megaquake caused a huge wave that hit the port of Sendai city, sending ships crashing into the shore and carrying cars and buildings through streets.

Police there say between 200 and 300 bodies have been found on the coast, according to news reports in Japan.   The official death toll stands at 88, with 349 people missing however Kyodo news agency estimates the death toll at more than 1,000.

A passenger train near Sendai is unaccounted for, a dam in Fukushima prefecture broke and washed away numerous homes, and a major explosion occurred at a Sendai petrochemical complex, Kyodo news agency said.

Coastguards are looking for a ship carrying around 80 dock workers that was among those swept away and a passenger train on the coast is also unaccounted for.  The quake rocked the capital, Tokyo, which was one of the cities shaken by at least 35 subsequent aftershocks.

UK ambassador to Japan David Warren, who was south of Tokyo, told Sky News: "It was very strong and a very long earthquake... it was frightening."   Police in Iwate prefecture, near the epicentre, confirmed the deaths of 34 people after a town centre was completely demolished by the surging wave.

After darkness fell on Friday night one large waterfront residential area in Sendai was ablaze with wild fires spreading from home to home. 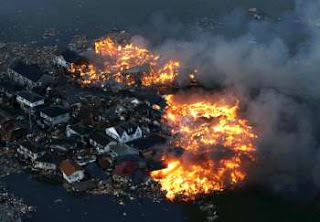 Houses catch fire after being hit by the tsunami in Natori city, northern Japan.

But despite warnings from the International Federation of Red Cross and Red Crescent Societies, the tsunamis have reached several countries without causing major damage.   Japanese news agencies said the country had requested US forces' help in the relief effort, as it still maintains significant military assets throughout the country.

AFP said that the Japanese military has also prepared 300 planes and 40 vessels to help with the rescue operation once daylight breaks on Saturday morning.   The Japanese government's top spokesman, Yukio Edano, said the country was sending troops to the quake-hit areas.

The earthquake - one of the strongest ever recorded - has obliterated Tokyo's Disneyland car park and caused large fires at sites including an oil refinery in nearby Ichihara.   Large aftershocks repeatedly hit the capital, following an initial tremor so strong it was felt 1,500 miles away in the Chinese capital Beijing. 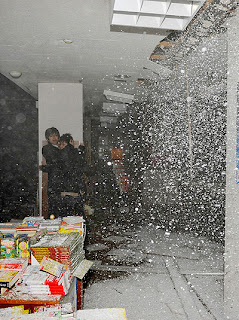 
World leaders have sent messages of sympathy to Japan, with the Queen expressing her sadness at the "tragic loss of life" caused by the disaster.  Japanese ambassador to Britain Keiichi Hayashi said: "The situation is still developing and we don’t know at this juncture the exact scope of damage."

"I don't know what to say... We are terribly shocked."

The International Atomic Energy Agency said a heightened state of alert was in effect at the Fukushima Daiichi nuclear plant, with 2,000 residents in surrounding areas urged to evacuate.   A state of emergency had also been declared at Onagawa nuclear plant in Miyagi prefecture after a fire broke out in a turbine building and an emergency cooling system failed.

The cooling circuit of the reactor was later reactivated, according to the World Nuclear Association. Japanese prime minister Naoto Kan had previously said there was no nuclear plant radiation leak caused by the event.

Airports and ports have been closed, while the Shinkansen 'bullet' train was stopped.  "The whole transport system was effectively closed down in the aftermath but it is gradually opening up again," Mr Warren told Sky News.

Millions of homes were left without power and Tokyo's fire department reported several people were injured when a roof caved in at a graduation ceremony in the city.  A hotel has also collapsed in Sendai, with people feared buried in the rubble.

Among the countries issued with alerts from the Pacific Tsunami Warning Centre in Hawaii were Guam, Taiwan, the Philippines, Indonesia, Thailand, Hawaii, New Zealand and Australia.  South America, Marcus Island and the Northern Marianas were also put on alert.  The energy wave passed by Guam and the Hawaiian islands, and is believed to skirted low-lying Nauru without major incident.

But authorities in Indonesia, Taiwan, Russia and the Philippines said minor tsunamis had caused little or no damage upon hitting their coastlines.

In Tokyo, large buildings shook violently and workers poured into the street for safety after the tremor struck.   Millions were evacuated in the capital as buildings continued to sway for hours after the initial quake.  Some residents of the city stood in their doorways handing out chocolate and sweets to those walking home from their places of work.

Google has launched a people-finder website for those in Japan worried about the whereabouts of friends and relatives.

"We are not aware of any British casualties at the moment but we are trying to identify any nationals who may have been caught up through our consular networks, but the phone network has been heavily affected," ambassador Warren said.

"We are still gathering information and our aim is to get as much information as we can and help any British nationals who need assistance," Mr Warren said.   A United Nations spokeswoman said international rescue teams were on alert should Japan request aid. 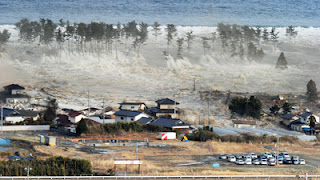 Waves of the tsunami smashed into residences in Natori, Miyagi

People in Japan have been speaking of their terror as the sea of debris swept inland.

Experts say the earthquake is the world's sixth biggest since 1900.  Police and coast guard officials said they were continuing to assessing the scale of the damage from the quake.   Several quakes had hit the same region in recent days, including a 7.3 magnitude one on Wednesday.   A megaquake is defined as one exceeding seven on the Richter scale. 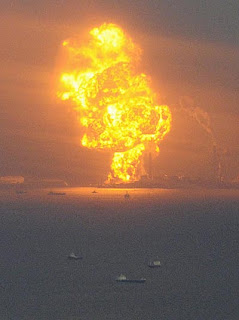 Prime Minister David Cameron, speaking after a EU meeting in Brussels, said the people of Britain stand by those who have suffered in Japan.

"On behalf of everyone in Britain I want to send our condolences to the people and government of Japan," Mr Cameron said.

He added that plans are underway to offer assistance to Japan and any Britons caught up in the disaster.  Mr Cameron said that Foreign Secretary William Hague chaired a Cobra planning meeting on Friday to formulate a response.

The Foreign Office advises Britons in Japan to monitor local TV and radio for evacuation information - radio stations in the Tokyo area with emergency information in English include the US Armed Forces station (810 AM) and InterFM (76.1 FM).


The article is reproduced in accordance with Section 107 of title 17 of the Copyright Law of the United States relating to fair-use and is for the purposes of criticism, comment, news reporting, teaching, scholarship, and research.
Posted by Vatic at 10:42 AM

I didn't even have all the pictures up yet, you should see it now, if you thought what I had up was bad, its even worse. I feel for those families. The difference between them and us here in the US is we are armed and we know who is doing this and that is the real "OH MY GOD, HOW COULD THEY DO THIS"? I feel sorry for them for when their karma comes its going to be huge.

Vatic it's very difficult to be respectful,of those who have not only no respect for us,but are monsters that are determined to do us in.But I will try.Good catch by the way on the Middle East day of rage.I had that on my calender for almost a mo. and forgot all about it myself.Distraction is always used.My blessings to all those who lost so much.I also think that the radiation could easily reach the united states!I also hope we get the harp readings for this one just like we did for Christchurch.It's time to call all the attention to this that we can,and I hope people will forward this to everyone that they know.It's time we got rid of HAARP and the people that are involved in the decision making!!!A runaway bulldozer could do it.Brock

I just read that the core did not blow out, only the outter shell so its not near as bad as it could have been. Fulford did a video on why this happened and I intend to find it and put it up as he makes perfect sense about it. You need to see the proof I just put up that HAARP did Japan. Its indicting. I hope Japan bombs the residence of all the Rothschilds in europe and ends this for us all.

iParrot Post is a global read and reporting news platform that enable users to post their account of events witnessed, worthy local and International news. iParrot Post is a breaking news portal.iParrot Post exists to provide independent news and information to the masses, comprised of news feeds from around the world. We enable our users and subscribers to submit local News that they see as important. It is also a portal to allow users and subscribers to comment and contribute to the News events of the day. Worldwide News | English UK News | Local UK News | UK Political News | English British Sports News | Business UK News | Breaking UK News | Technology UK News |