Vatic Note:  Not a word by the protestors of the CAFR funds sitting in the government Wall Street Brokerage accounts feeding those same non paying and non citizenship "corporate pigs at the trough" the trading fees.   Those moneys are not considered tax payer funds by either the governments or the bankers because they were generated by private revenue generating activities,  like parking fees, prison contracts, etc. And yet, the expenses for those same activities are taken out of our taxes  that is used to pay for them.   Its a slave situation.  Socializing the costs of doing business, while privatizing the profits of doing business.  I DO NOT BLOODY THINK SO ANYMORE.   So when budget time comes around THE ONLY REVENUE THEY CONSIDER IS TAX REVENUE.  Its time to CRASH the Rothschild EMPIRE.

What?  With literally billions sitting in state and local coffers, they say they have to raise taxes to meet budget shortfalls????  LIARS, EVERY SINGLE ONE OF THEM ARE LIARS ON TOP OF EVERYTHING ELSE.  Damn that makes me mad.  But then, they have a sign on the wall in Israel at the offices of Mossad that celebrates "deception" AS A LEGIT TACTIC.... Deception is a nice word for LIARS.   I don't know about you guys, but I literally do not trust a single institution in Government anymore at all, and definitely not in corporations and especially not in wall street brokerage houses or owned banks like Wells fargo and BOA.   We should be SHUTTING THEM DOWN, NATIONALIZE THEM, KICK THE BANKERS OUT OF THE COUNTRY,  (THE ONES WE DON'T ARREST AND THROW IN JAIL) AND RECOVER OUR OWN ECONOMY JUST LIKE ICELAND DID FOR DOING WHAT I SUGGEST.

And because they committed crimes we  confiscate their assets UNDER THE RICO ACT, just like they do to drug dealers and that will make up any short fall.  Then get off fiat currency, find another method or currency standard worth something,  and then do our own credit, print our own currency, and charge ourselves no interest if we have to borrow from ourselves.  That would work..

Protest shuts down Bank of America branch
http://members.beforeitsnews.com/story/467/408/Protest_shuts_down_Bank_of_America_branch.html
By Barracuda, Before It's News, March 8, 2011 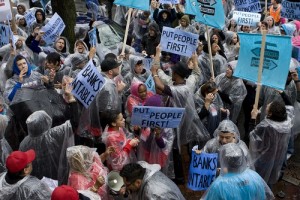 A new campaign by a national network of activists kicked off Monday morning with a splash as it led hundreds of fed up homeowners in a series of protests that brought business to a halt at a major bank and the House speaker's office.
The National People's Action network picked Monday to launch the "Make Wall Street Pay" campaign thanks to another show in town: the National Association of Attorneys General's Convention in Washington, D.C.

But they didn't stop there.

Moving from the meeting of all 50 Attorneys General, the crowd made their way to a Bank of America branch on Pennsylvania Ave. While about 300 stood outside, another 300 moved indoors, filling up the lobby and bringing business to a standstill.

Then, they went to see if Rep. John Boehner (R-OH) was available, filing into his Capitol Hill offices to send an unambiguous message: Wall Street must pay.

"They delivered the message that we have a revenue crisis and that Wall Street must pay its fair share," George Goehl, executive director of National People's Action, told Raw Story in an exclusive interview.

"Attorneys General from all 50 states have launched an investigation into annual foreclosure fraud," he continued. "American homeowners need this opportunity to save people's homes, so people have been organizing all across the country, really heavily in about 15 states, to put pressure on AGs to get them to push for strong settlements on this stuff. That means principle reductions on mortgages and criminal penalties for bankers that are breaking the law."

Activists inside the bank presented tellers with their own past-due notice, chanting for them to "pay your bills."

That's all due to a "revenue problem" and not an entitlement or deficit problem, the protesters insist.

There were no arrests, Goehl added.

The group's website encourages visitors to calculate the income they've lost since the onset of America's financial crisis in 2008, then send their own bill to their representatives in Washington. They also call upon activists of similar economic status to launch their own "Make Wall Street Pay" efforts.

This video was published to YouTube on Monday, March 7, 2011.

VN:  Now watch this one from Russia Today about the New York march and it was big.   The report was excellent as well.  Russia Today is going to replace CNN pretty soon if they are not careful.

Down with 'Too Big to Fail': Angry Americans March on Wall Street


The largest anti-Wall Street rally since the credit crunch has taken place in New York. Thousands of workers and trade union leaders marched in anger over lost jobs and ruined lives, demanding answers from the source of the trouble - the banks.