Vatic Note:  What is going on with these cabal selected Presidential candidates?  Bush Jr, was bi-sexual, married to woman, and had children,  while also having a gay relationship with the Mayor of Knoxville, Tenn, Arther Ashe, who was then appointed as ambassador to Poland, to get him out of town to avoid any scandels surrounding Bush Jrs.  escapades.

Then we get Obama who has not even tried to hide his homosexuality since he was in high school.  After all, Obama and Rahm Emmanual were members of the same Chicago gay bathhouse.   Then there is the Bohemian Grove where so much of this kind of kinky sex went on behind the scenes as told to us by the Paedophiled Cathy O'Brien.   Then there are the sex gay scandels surrounding Hillary Clinton that have gown over time.  Here are a couple of them....  This link is the second one, https://www.youtube.com/watch?v=MHyw6hrrNFM

Rubio has been pushed and promoted as the GOP candidate by the powers that be, and is that why?   Is he controlled and blackmailed by these cretins? Why so many in such a short period of time and now a third or 4th one.   Are the cabal power brokers all gay???  Well, if they are also Satanists, then it could well be the case.

If WE do not stop all of this, then we, as a nation, are going down the Thomas P. Crapper and we can see it practically every day just about everywhere.   Its time we got back to God and goodness that we used to be as  a country.   We were the example of freedom and goodness to the rest of the world and everyone wanted to emigrate here.   That is not the case today.   We are viewed as a degenerating country into a third world country full of perversions, and corruption.

Just my opinion on this.... but I believe they push and promote this in order to keep the population down and decreasing as they planned and communicated to us with the 1974 Georgia Guidestones.  Remember, they want to reduce the population down to a half billion worldwide.   Its on the Stones in 5 different languages.  Check it out for yourselves. 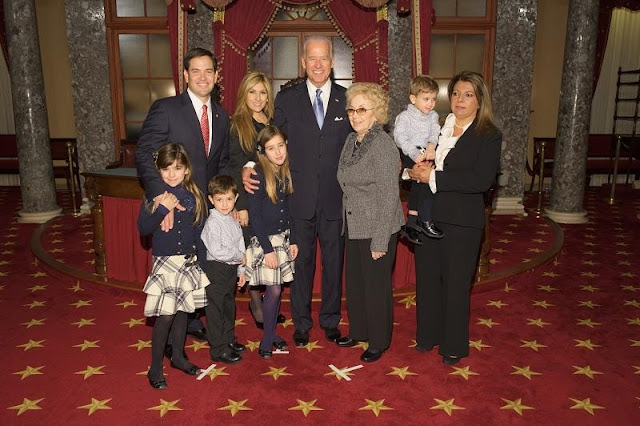 Republican insiders have reported to WMR that Florida Senator and presidential candidate Marco Rubio was, as a high school and college student, known to be a very extroverted homosexual in both South Beach in Miami, a popular gay area, and at college in Gainesville, Florida.

In 1989, a year before Rubio was arrested with his friend Angel Barrios and another unidentified male friend in Alice Wainwright Park in south Miami, ostensibly for drinking beer in a car after closing time in a park known as a pickup locale for gays, Rubio sang and danced in a South Miami High School troupe. The song and dance troupe was based on the Chippendales but with a very gay theme: half Chippendales and half Village People. Rubio omitted his participation in the dance troupe in his biography, "American Son."

It is also significant that Rubio did not have the best parent models in growing up in Florida and Las Vegas. His Cuban parents, according to GOP insiders, did not emigrate from Cuba to escape Fidel Castro and Communism -- they left Cuba for America in 1956 -- but were Havana casino workers employed by Jewish mob boss Meyer Lansky and brought to Florida. From Miami, they eventually left for Las Vegas to work in mob-owned casino hotels. Rubio's father, Mario Rubio Reina, worked as a bartender in Las Vegas casinos while his mother, Oriales Rubio, was a hotel maid. Rubio has falsely claimed that his parents fled Castro and Communism. In 1956, the U.S.-supported fascist dictator, Fulgencio Batista, was fully in control of Cuba. 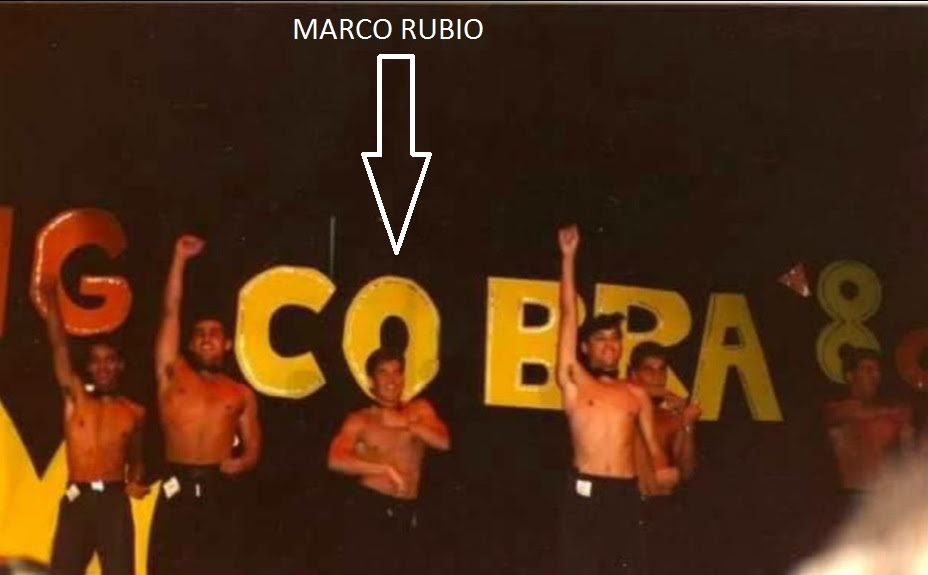 Marco Rubio, 1989, dancing and singing in a South Miami troupe that combined the Chippendales with The Village People.

In order to prepare for the University of Florida, Rubio attended Santa Fe Community College in Gainesville. Republican sources have told WMR that Rubio, Barrios, and two other students shared a townhouse in Gainesville that was known locally as a "coke house," where cocaine was readily available, as were almost non-stop parties in what amounted to an off-campus gay frat house. In 1987, Rubio's brother-in-law, Orlando Cicilia, was busted by the Drug Enforcement Administration (DEA) for his role as a key figure in a cocaine smuggling ring in south Florida.

After graduating from the University of Florida, Rubio attended the University of Miami Law School. In 1995, Rubio claims he met his wife, Miami Dolphins cheerleader Jeanette Dousdebes at a "foam party" in South Beach. There is one thing wrong with Rubio's story: foam parties in South Beach were almost exclusively gay events held at gay clubs like "Warsaw Ballroom" and "Amnesia," the latter name befitting some of Rubio's memories of his time in Miami. The following is a description of foam parties in a Miami New Times article by reporter Steven Almond, titled "Foam Sex," published in the June 8, 1995 issue:

"The scene generally features several hundred scantily clad bodies packed onto a dance floor and writhing to bone-rattling music under strobes and colored lights. Nothing new, right? Until suds come gushing out of a machine suspended over the dance floor. As if on cue, various forms of passionate embrace begin. Kissing. Petting. Rubbing. Because the foam froths up waist high, it acts both as a lubricant and camouflage. Mutual masturbation is an occasional component, generally beneath the cover of foam. As the evening wears on, a few men pair off and sit together in the foam that builds up outside the partitioned-off area." 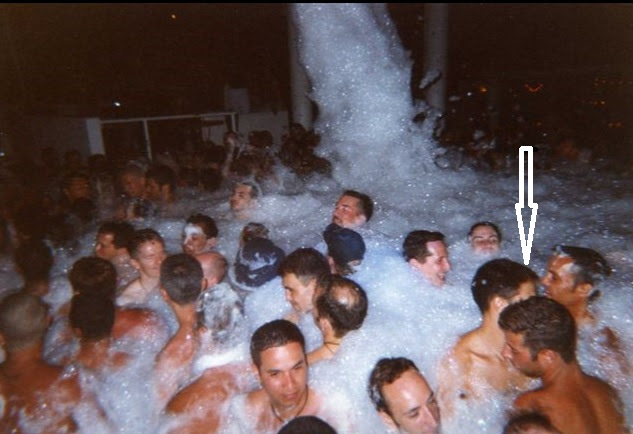 Although he is obscured by the man in front of him, Marco Rubio [arrow pointing to him] is believed to be in this 1995 photo of a gay South Beach foam party held at the Warsaw Ballroom. Rubio claims he met his wife at one such foam party in 1995.

At "Amnesia," emcee "Kitty Meow, a drag queen, would officiate over the foam parties, directing participants what to do. Some foam party participants only wore jock straps. It is entirely possible that Rubio did meet his future wife at a foam party, but the women who attended these functions were largely what are known as "fag hags" out to have a good time while at the same time avoid being hit on by the gay men.

Rubio, who has four children and claims to be a devout Christian, alternately attending Catholic and Baptist churches in south Florida, appears to have a not-so-secret past. There is a Spanish word that aptly describes the presidential hopeful: Cristiano afeminado or Christian homosexual.

Generally, readers are solely responsible for the content of the comments they post on this web site. Comments are subject to the site's terms and conditions of use and do not necessarily reflect the opinion or approval of Wayne Madsen Report.com. Readers whose comments violate the terms of use may have their comments removed without notification. Please do not post hate messages as this is a violation of European Union law against racist and xenophobic messages. WMR's web service is based in Wales, UK and is subject to EU law.

Email ThisBlogThis!Share to TwitterShare to FacebookShare to Pinterest
Labels: election: 2016

I want to know who WMR is please, i have followed Madsen, but this is over the top. The answer will go to gmail and i dont access that anymore dont know how to change it sorry

Tess, obviously, if you have followed Madsen as you profess, then you know full well, who he is, he is an ex intel that used to work for intel in our government. As for Rubio, what I don't want to happen is to elect him as we did those other 4 Presidents and then find out later that it was all true.

Isn't it better to pick someone who is not tied into the cabal? Not taking any campaign contributions from the globalists? and then be assured we won't have to deal with blackmail, bribery or sexual favors as pay offs for selling the American people out? In fact, aren't you tired of immigrants who say they are Americans born here, when it fact they are not and have no loyalty to this country, only to their country of origin? Lots to considered, its your country, you decide as we all must.