Vatic Note:   Its time these billionaires went to jail.  Iceland had the right idea and now they are in recovery.    The Bill Gates of this world serve satan and no one else but themselves and they have no humanity, compassion, or love for anyone but themselves.  Rather than presenting the problem to us to ask our aid in determining a best course of action,  all they care about is how to solve the problem AND LINE THEIR POCKETS AT THE SAME TIME, EVEN IF IT HARMS ANOTHER HUMAN.   These evil khazars are the scum of the earth and deserve to be with their mentor and god,  Satan.  Lets help them get there and see how they like it.

I pity their children and the manner in which they will be raised.  Just look at how Bill Gates was raised by the founder of Planned Parenthood and see how inhumane he is in  his agenda?  As the Bible says, those who harm little children will suffer greater than them all.  In Bill's case, its not enough.  He deserves much more.

Remember, India has a warrant out for his arrest, and they will arrest and prosecute him for what he has done to the children of these Indian Parents.  He doesn't even have enough conscience to feel bad about it.  He strikes me as someone who enjoys his work, harming others.

It appears to me that his whole foundation is about destroying the lives of these kids that he gets vaccinated and sterilized.  It appears from her background that his wife is no different, so she should not be running the foundation once Bill is safely tucked away in a prison in India somewhere, that no one knows where it is.

We are again asking for the deficit of $350 for the first of the month. Due to an immediate and generous, caring donors we are now down to $100 that we need by the 1st of the month. That is only 6 days away, so we are getting close.

Again we are working on trying to end this, however, its going to take some time.  Until then we need your help to stay on the net, thats if the harassment doesn't increase as it has recently.  We are so grateful for your support in so many ways.

If you can afford it please donate off to the right of the blog.  God Bless you and your family in all things.


US bioweapons lab with links to the Bill and Melinda Gates Foundation at core of Ebola epidemic
https://dublinsmick.wordpress.com/2014/07/25/us-bioweapons-lab-with-links-to-the-bill-and-melinda-gates-foundation-at-core-of-ebola-epidemic/
By Admin of Dublins Mick, July 25, 2014

Update: 9-10-2014
Was Glenn Thomas aware of hard evidence showing that the lab was faking positive diagnoses for ebola at Tulane University in order to justify forcing people to undergo treatment


There Is The Jim Stone Take On Ebola-From Ghana: Ebola is not real and the only people who have gotten sick are those who have received treatments and injections from the Red Cross

Just how involved is the Bill and Melinda Gates foundation???  Well, lets look at their record.   One good indicator is there is an arrest warrant out in India for both of them and they will be arrested, tried and if convicted, punished in India which is the country that was brave enough to issue such an arrest warrant for their vaccine program given to young girls in India to make them sterile.

We also have undeniable proof that Bill Gates has proposed using vaccines to depopulate the planet and he said so right on a massively distributed video in his own words, that vaccines would take care of depopulating the planet.  Now how is that for evidence to be placed before a court of law?  Mr Gates has condemned himself with his arrogant, thoughtless comments.  I want to attend the hanging ceremony.

Nuremberg type trials are going to be packed with those accused of first degree attempted murder, assault and battery, treason, and fraud.   That will include the "SILENT MSM" of which 96% are owned by the khazars.  We did a recent blog on that fact.   Evidence is just building up all around them and they don't even see it.  That is how arrogant they are.  A major weakness for those trying to control the globe.  Anyway, you read and decide.


US bioweapons lab with links to the Bill and Melinda Gates Foundation at core of Ebola epidemic
https://dublinsmick.wordpress.com/2014/07/30/state-of-emergency-in-liberia-due-to-ebola-and-fears-of-marshall-law-in-britain/
Update: July 31, 2014

Second US doctor now infected with Ebola in Liberia.
http://www.zerohedge.com/news/2014-07-27/second-us-citizen-infected-ebola-liberia

Local people in West Africa appear to know without having to read the CDC Ebola fact sheet that hospitals and medical staff are spreading Ebola. The Telegraph reports people wielding knives surrounded a Red Cross vehicle in Guinea.

The involvement of hospitals would also explain why Ebola has appeared in this part of Africa for the first time ever and in so many different locations at almost the same time.

Given that the CDC itself admits that hospitals are, in fact, the likely source of any Ebola outbreak, the question arises which specific hospital could be the origin of the current Ebola outbreak?

At the epicentre of the current Ebola epidemic is the Kenema Government Hospital in Sierra Leone, which houses a US biosecurity level 2 bioweapons research lab with links to the Bill and Melinda Gates Foundation and Soros Foundation. 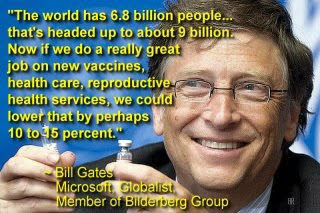 “”The Consortium is a collaboration between Tulane, Scripps Research Institute, Broad Institute, Harvard University, University of California at San Diego, University of Texas Medical Branch, Autoimmune Technologies LLC, Corgenix Medical Corporation, Kenema Government Hospital (Sierra Leone), Irrua Specialist Teaching Hospital (Nigeria) and various other partners in West Africa. …The Consortium intends to expand this program to include other important infectious agents such as Ebola, Marburg and other Arenaviruses that are of great concern to public health and bioterrorism,” states the bioweapons lab website.

MSM or no MSM….deadly diseases are on the rise…mostly due to lack of sanitation, weak immune systems, rapidly rising processed food intake, heavy drug dosages, more international travel in the last 2-3 decades, close proximity between animals and humans, pesticides in food, contamination of all kind and the highest human population on planet Earth since it was born (big bang or not).

I place most economic, social, criminal etc problems on extremely high and unsustainable population which is the basis of all troubles. From 1bn in early 20th century, we grew to 3bn in 1960′s and now are at 7.2bn….aiming for 10bn by 2045.

MERS is being spread across Middle East and has almost reached India. Has been found in Saudi, UAE, Iran, Egypt, Qatar, Oman, Jordan, Lebanon etc.
It has been found in travelers in US, UK, France as well. http://www.cdc.gov/CORONAVIRUS/MERS/

China had it’s own instance of the bubonic plague but the quarantine of an entire city has now been lifted: http://www.livescience.com/47006-marmots-china-and-the-plague.html

Africa is having Ebola and over 600 may have died according to WHO today: http://www.newvision.co.ug/news/658015-west-africa-ebola-death-toll-reac…

India is creating superbugs of its own unique kind that have no cure and could potentially be worse than Ebola and shall spread even faster. http://articles.economictimes.indiatimes.com/2014-07-24/news/51982322_1_…

New Delhi has had the unique infamy of being the first city in the world to be used as a name of a virus. This is a mixture of viruses like E.coli and Klebsiella and can spread through air, moisture, contact or unclean hygiene and is INCURABLE. Basically, if you get it, you are DEAD.

Knowing the hygiene and santitation conditions of India, tells you that it is a matter of time before NDM-1 will become a global epidemic. Dozens of cases have been found in UK, several in Canada, some in US and of course many across the Indian subcontinent. http://www.indiastudychannel.com/resources/124111-NDM-Origin-Symtoms-Cur…

West Nile Virus is alive and active across USA: http://healthmap.org/en/#!d=
Just today a West Nile related death was reported in Arizona being first in 2014…http://rt.com/usa/175416-first-west-nile-death-us/

This is a clash between humans versus the animals/viruses.
Obviously, animals/viruses win every time because we all are busy fighting each other (for the sake of our ego, power and money) in addition to the animals/viruses, plus they have shorter life spans anyways and are much greater in numbers than all of us.
http://www.cbsnews.com/news/experimental-ebola-serum-given-to-stricken-u-s-woman/