***Fundraising - We met our goal for this month, which means we are continuing with our mission of exposing those enemies of America that are attempting to bring her down.  We will see, what we will see.  Thank you to all who aided us in this endeavor and contributed to our blog, both in support and in dollars.  Without you, this would not have happened.  God bless you all.

Vatic Note:   As I said in previous blogs, the bankers (Goldman Sachs international) run China's country and its economic life and now with the final bring down of our nation,  these bankers can now strip the wealth from the Chinese Companies and investors they have conned.  I have not much to say here, since its all clear as a bell.  I wish I disagreed with the analysis... so I would have something to write. LOL 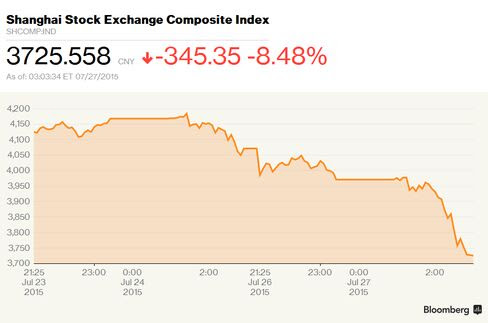 I told you so barely covers it on this one!

China failed to provide the anticipated additional stimulus over the weekend or today and the Shanghai Composite quickly gave up half of the gains they made over the past two weeks of MASSIVE stimulus and rule changes that STILL have many stocks halted and this time no one was allowed to cover with short sales.

This morning, in fact, barely one in 100 stocks that were trading in Shanghai were not in the red with MOST of the index closing limit down.   THAT, my friends, is a catastrophe! 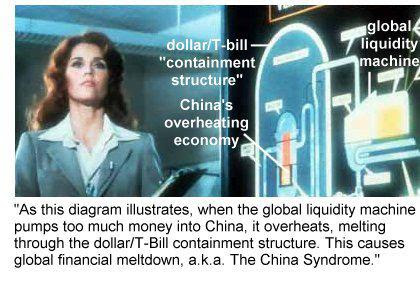 As I noted on Friday, China’s PMI showed CONTRACTION for the second month in a row DESPITE the MASSIVE stimulus – the only thing that would have been strange about today would have been a rise in the Chinese indexes.

This morning, rather than new stimulus, China reported (surprise!) that Industrial Profits had fallen 0.3%.  That’s WITH the Government tossing Trillions at the market and WITH the CLAIM of 7% GDP growth.

You’ll hear a lot of nonsense in the MSM but what’s really spooking investors in China today is that you can no longer reconcile the country’s fake economic data with the fake (but not as fake) Corporate Profits.  We discussed some of this nonsense, here, here, here and here – if you’d like to get up to speed. 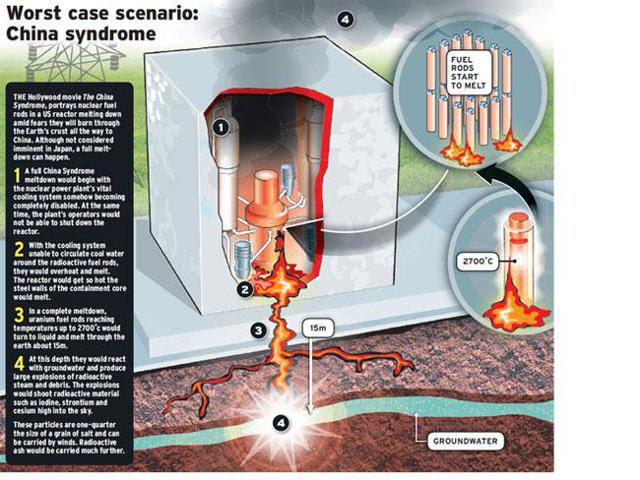 China consumes 40% of the World’s coal, copper and steel and essentially acts as America’s factory floor, making goods inexpensively, often in conditions that would not be tolerated in US factories.

To some extent, those lax regulations are now restricting China’s growth as the air is unbreathable and the water is undrinkable to the point where it’s affecting the fertility rate of their population.

As noted by Morgan Stanley earlier this month, “Forget about all the shoes, toys and other exports. China may soon have another thing to offer the world: a recession.”  China accounted for 38 percent of the global growth last year, up from 23 percent in 2010, according to Morgan Stanley. It’s the world’s largest importer of copper, aluminum and cotton, and the biggest trading partner for countries from Brazil to South Africa.

That’s very logical when you consider how many US and European companies have tied their future hopes and dreams to the Chinese economy.  Like the banking crisis in 2007/8, China may fall apart very quickly simply because the asset growth that’s on the books may be as fake, Fake, FAKE as re-packaged sub-prime loans were 8 years ago.

We’ve discussed the shenanigans involved in China’s debt juggling back on May 22nd’s “China Defaults Keep Adding Up“ and this chart sums it up nicely: 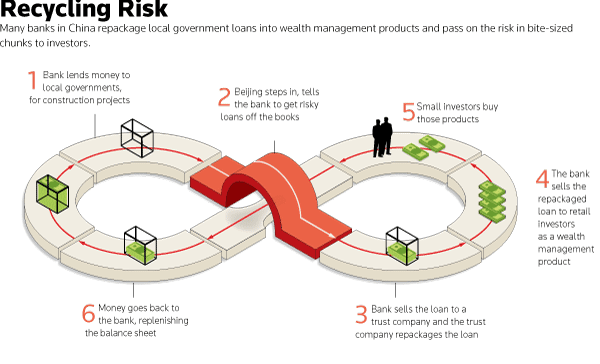 It will be interesting to see if there are now going to be political repercussions in China as Xi’s Government essentially forced Chinese companies and their Top 1% investors to prop up the market.  The 90M individual investors in the Chinese market are essentially their Top 10% and, politically, that’s not usually a crowd you want to be on the wrong side of.

That’s right, we have our own Bubbles right here in River City, with a capital “B” that rhymes with “P” which goes with “E” and that’s a runaway p/e if ever I head one (yes, I’m that old!).  ”Let he who is without ridiculous market valuations cast the first stone” as the saying goes.

We’re still rewarding companies like Amazon (AMZN) with ridiculous p/e’s (126 times forward earnings in their case, 352x for NFLX) that suck the money out of more productive endeavors and, in the long-run, HARM our overall economic growth through malinvestment.  As Gordon Long notes:


“One of the first axioms of analysis is: “Garbage In, Garbage Out”! If your data is flawed, everything you do with it and the decisions stemming from it are flawed and dangerous to your financial health. Experienced analysts will often be found relentlessly checking, rechecking and validating their inputs and assumptions.  If only our economists and the sell side analyst community were this diligent. But then it isn’t their money. Only a year-end bonus for the ‘extras’ in their life is at risk.”

If you distort the data through misinformation and manipulation, then all data stemming from it is obviously flawed. If in turn that data is further distorted, then the delusion becomes greater until it disconnects from reality and the system becomes dysfunctional.  Are we talking about China, Japan, Europe the US or Emerging Markets here?  Sadly, it applies to all of them.

This is why we’ve sat out the summer so far, sticking to CASH!!! (have I mentioned how much I like CASH!!! lately?), which hasn’t let us down so far. We’ve done a little bit of bottom-fishing and plan to do some more but still we remain “Cashy and Cautious” because we’ve seen this movie before and it could easily turn into a major disaster from here.

The US economy is recovering and Europe is showing some encouraging signs but China alone can lead the global economy back into recession so let’s not try to outthink the market when there’s no need to rush into things.


We’re not going long but now that we have our Egg McMuffin money, we can afford to wait and see how the open goes – a great example of why we LOVE our Futures Trading Tools!  There will be a FREE Live Futures Trading Webinar tomorrow (1pm EST) – you are invited to join us.

Would you like to read up-to-date articles on the day they are posted? Click here to become a part of our growing community and learn how to stop gambling with your investments. We will teach you to BE THE HOUSE – Not the Gambler!

China's market is tanking but they are sitting on a pile of gold. Not sure how that all worksout but we are a ten year recessuon if they reported the real numbers and our gold has been stolen, gone for years.
This article lost credibility when it said the US economy is improving. Flat out lie. All of the car boom is sub prime loans to people who will never pay he car out to term.

I definitely believe you on this one......