What happens to us when the magnetic field surrounding Earth changes direction?

Vatic Note:  Well, I am under timeline pressure here at the library so another short note and on this one I could go on ad infinitum.  I am wondering what affect this would have on the different blood types, including RH negative.  It says here that humans will exhibit mental illness from such a shift, but the good news is, it takes a very, very, very long time to complete.   So many of us will be gone when it happens.

That does not mean we don't have an obligation to worry about our future generations, that just means we have time to do so effectively, since we are a creative lot, with great flexibility and adaptabillity, and thus we will do well under those changes.  I have no doubt about it since we did that previously and there is no reason why we could not do it now.  As Michael Tsarion has said in his "Origins of Evil" videos,  "We are amazing creatures, living ordinary lives".   And this below means we will have a great opportunity to prove it.

What happens to us when the magnetic field surrounding Earth changes direction?
http://www.rawstory.com/rs/2015/03/what-happens-to-us-when-the-magnetic-field-surrounding-earth-changes-direction/
By Dana Dovey,  reposted with permission from Medical Daily, March 5, 2015 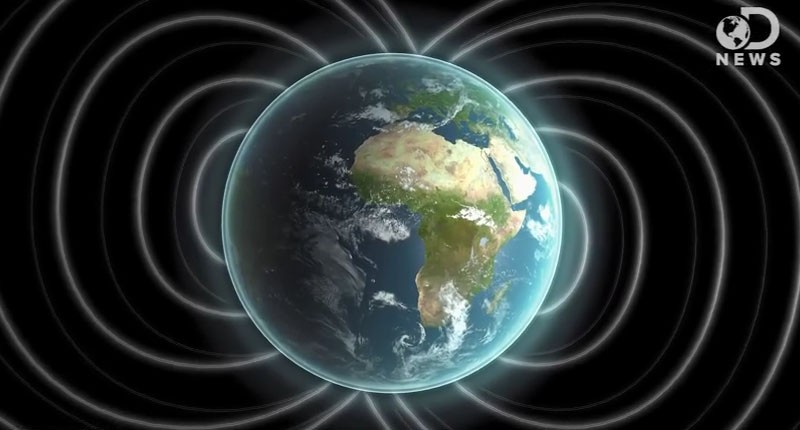 If the expression “history repeats itself” holds any truth, then Earth is due for a pole reversal any day now, with a recent report suggesting it may occur in our lifetime. Pole reversals are natural and in reality a far cry from what’s depicted in natural disaster films. However, when the poles do change again it’ll be rather hard to miss. Here’s what to expect if you get to witness our next polar flip.


Santa May Be In Need Of An Address Change

In a nutshell, the core of the Earth is basically a giant magnet, and every few hundreds of thousands of years the South Pole becomes the North Pole and vice versa. This flip does not mean that the planet necessarily turns topsy-turvy, but rather that the invisible magnetic field surrounding Earth changes direction, causing your compass to point south rather than north. The pole change will have the biggest effect on our power grids and communication systems, but researchers predict that the human body may experience some of the effects of the reverse as well.

The Earth’s magnetic field takes between 1,000 and 10,000 years to reverse, LiveScience reported. However, it’s during this transition period that humans will be subjected to the most noticeable changes. Some will be harmless (and amazing) such as the aurora borealis being visible in Hawaii and Venezuela rather than the Arctic and Alaska, as reported by The Huffington Post. Others will be slightly less pleasant.

"The most dramatic changes that occur when the poles reverse is a very large decrease of the total field intensity," said Jean-Pierre Valet, who conducts research on geomagnetic reversals at the Institute of Earth Physics of Paris, LiveScience reported.

As the poles slowly flip, the magnetic field begins to progressively lose its strength. Although the Earth is also protected by the atmosphere, with a weakened magnetic field the planet will be slightly more susceptible to blasts of radiation from the sun. Coronal mass ejections (CME) occur occasionally toward the direction of the Earth, and changing poles may increase their effect on our planet.

"Some of the particles associated with CMEs can be blocked by Earth's magnetic field. With a weak field, this shielding is less efficient," John Tarduno, professor of geophysics at the University of Rochester told LiveScience.

While scientists debate over the severity of solar radiation that Earth would be exposed to during a pole change, it’s also important to keep in mind that modern sun screen is capable of protecting against most radiation given off from the sun.

Many animals are sensitive to the Earth’s magnetic field and rely on geomagnetism to aid in navigation.  During the reversal of the Earth’s magnetic field it’s possible that animals such as bees, salmon, turtles, whales, pigeons, and even bacteria, could become disorientated, but seeing as Dr. Sten Oldenwald, an astronomer at the National Institute of Aerospace explained that these shifts have occurred at least 170 times in Earth’s history, it's likely these animals will be able to find their way again.

Although humans do not rely on the Earth’s magnetic field as heavily to help with navigation as many animals do, many scientists have found a correlation between human mental health and changes in magnetism.

It’s been observed that during geomagnetic storms, when animals lose their sense of direction humans exhibit a different type of change, and depression and suicides will increase. However, what exactly would happen to human’s mental state during a magnetic reversal remains unknown.

Whenever the polar reverse does happen, it's likely to take a very very long time to complete.
"Such a flip is not instantaneous but would take many hundred if not a few thousand years," Rune Floberghagen, mission manager of the European Space Agency’s (ESA) satellite array Swarm, told LiveScience.

In that time, we’re likely to have become prepared for its effects on our health, and in a world where people are dying from the caramel coloring in soda, it may be that the poles changing are the very least of our worries.
The article is reproduced in accordance with Section 107 of title 17 of the Copyright Law of the United States relating to fair-use and is for the purposes of criticism, comment, news reporting, teaching, scholarship, and research.
Posted by Vatic Master at 1:00 AM