Vatic Note: If you were a psychopathic wannabe tyrant, how would you divide the nation and use that division to take over the country?   SMART PHONES, IPADS, IPODS, AND TV.   Now if you want to do a soft kill on a nation of people, so you can depopulate the nation without them knowing and reacting to it, by trying to kill you instead,  then using these smart phones and other electronics is certainly the way to go.  What you will read below is the damage to our organs that these electromagnet waves do to our brains and reproductive organs.

Ever wonder why the government stashed millions of coffins all over the country, from Arizona, to Georgia?   Now we know why,  given the poisons in the chemtrails, our drinking water, and foods, and now the electro- magnetic pulsing giving us radiation and attacking our organs and making us sterile.

Finally, notice how no one talks to each other  anymore, or reads any truly though provoking ideas, philosophies, etc.  or does any writings as we used to do as average Americans.  Journaling is now a thing of the past.  How many great inventions, mental constructs,  philosophical meanderings have we lost in our society due to the complete erradication of mental, emotional, and verbal  talents are being lost by pure neglect and deception, such as common core in the schools???

I am still at the library, so I am cutting this short.  Hopefully, monday or tues, y ou will get my full vatic notes on these subjects. 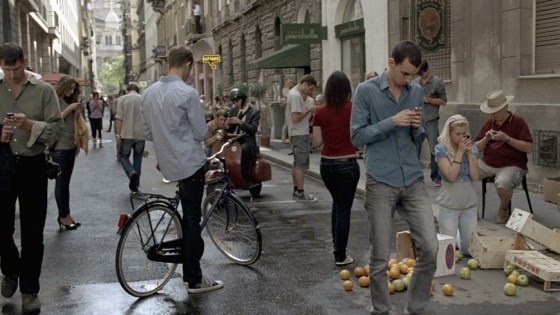 (left, smart phone apocalypse)
Thanks to smartphones, people are always
distracted. They are not interacting with people
or places in the moment. Baby boomers like
David Douthit have banished them from their lives.

Everywhere, people seem to be glued to their smartphones. I was at one of my son's baseball games. My ex-wife and my daughter were in the bleachers behind home plate. Neither one saw any of the game, as they were both busy texting the entire game. My son hit his first home run. After the game he asked his Mom if she saw it. She answered, "Saw what?" They would call and expect me to call them back immediately, and get mad when I didn't. The smart phone was much more an inconvenience, than convenience. I threw it away, and have not had one since.

My wife and I had to put a sign on our front door that reads "Turn that bleeping smartphone off!" because her kids kept coming over to make phone calls, or at least that is the way it seemed. It was aggravating when a visitor comes over and just had to "take this call" or that call after call. Or, they would be sitting on the couch looking at the smart phone and texting. You get schizophrenic trying to converse with someone who is some place else mentally all the time.

Then there is the matter of electromagnetic radiation waves emitted from the smart phone into the users brain.

There is ample evidence smartphones cause brain tumors, as well as a host of other maladies. I make it a point to tell all my family and friends about that risk. It is usually dismissed with a, "So what? Everybody dies sometime." 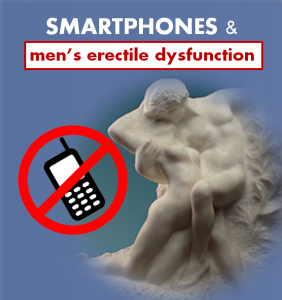 Although my son has a smartphone, I do not allow him to put it up next to his brain, or carry it in his pocket next to his testicles. Organ tissue is much more sensitive than muscle or bone. My boy is only seventeen, but I would like him to use his brain, and father some grand kids someday.

This generation will be stunted. They have conceded their cognitive ability to computers and cell phones. It appears this has enabled them to argue and bicker with people non-stop. The smartphone is a extension of their sour attitude. Grammar and good manners are gone.

This generation has no morals. The breakdown of morality has a lot to do with rise of technology. You would think technology would not have affect  morality, but it has enabled the wolves among us to be more wolf-like. Guys brag about bedding hundreds of women. They attribute the ability to meet more women to modern technology.

Most modern men have absolutely no standards. The only standard they have is their ability to use other people. The exact inverse of the Golden Rule.

I also try to stay off the computer. I have to admit, it is addictive. The pixels excite the brain in a drug-like fashion. I have spent too much time on the computer in the past. It didn't make me any happier or wiser.

Knowledge and wisdom are two different things. Knowledge is accumulated information. Wisdom is the ability to know the right way to use it.  Wisdom is gained by negotiating difficult situations, crises, real life moral dilemmas. Time spent on the computer is not real life experience. I think I will go for a walk and exercise some wisdom and my legs.

Makow comment- And David doesn't even get into the surveillance aspects.

At the moment people remain concerned mainly about the loss of privacy [1] that goes with storing every byte of information about you on these GPS tracking, hand held chipset.

But you'll get over that.  Now that they've got you hooked on 'convenience' , heavily invested into it (iPhones ain't cheap), and visually dependent upon digitally processed images do recognize what you're seeing on that little screen as 'real', privacy will become less important.

Just this morning I read another piece erosion of privacy perception in CBC News.
"At the border, we're the ones who have voluntarily engaged with security, law professor suggests"http://www.cbc.ca/news/alain-philippon-phone-password-case-powers-of-border-agents-and-police-differ-1.2983841From now on, Airport police will require your password to your smartphone without due process.  Privacy used to be a guaranteed Constitutional right.  Now privacy is subject to 'denial of service''.    Want to use the plane ticket you bought?

Social networking was designed half a century ago as gradual re-programming of mindset of the "collective" .

Germany banned this from German FACEBOOK, but if you have your photos on FACEBOOK in the Western Hemisphere...TAG! Gotcha!
http://www.engadget.com/2014/09/02/facebook-said-to-bring-back-some-face-recognition-features-in-th/Smartphones are just another stepping stone toward acceptance of nanochipping anyway.   [1]  How the NSA Accesses Smartphone Datahttp://www.spiegel.de/international/world/how-the-nsa-spies-on-smartphones-including-the-blackberry-a-921161.html - See more at: http://henrymakow.com/2015/03/smartphones-have-debased-society.html#sthash.p3L7X16H.dpuf
The article is reproduced in accordance with Section 107 of title 17 of the Copyright Law of the United States relating to fair-use and is for the purposes of criticism, comment, news reporting, teaching, scholarship, and research.
Posted by Vatic Master at 1:00 AM