***Fund Raising update: We have met our goal. WE wish to thank those of you who donated today that put us over the top for our first of the month deficit.  We are early in meeting that deficit and we are eternally grateful.  We had one donor from New Zealand who put us up over it today.  God bless you all who did donate this month, and helped to keep us up and functioning in our search for truth......this ensures we can continue for another month.
Hopefully Jewelry will sell for Christmas and our hunters stop by and buy for their wives. Then I can give you all a break.  lol  Thank you all for all your support and aid in every way.  We appreciate our readers and their comments, and contributions on information, as well as the donations.  God bless you all.

The harassment has not stopped, but we are managing around it. I used a neighbors computer today to find out that we got the donations we needed and I was able to get it out to the bank.  But understand that this dramatic increase in cyber harassment, plays into this below very well.  Were they using gradualism leading to some ultimate larger goal?  We will find out.

Vatic Note:  This was so good, so thorough  and so complete that once again, there were things I did not know, and I do this every single day of the week, 7 days a week.  That is why we have to share, so we all can cover what we can and then share to keep the information highway well traveled, repaired and cleared to increase our awakening and awareness.  After all I have read, there is no doubt anymore that we are living on a planet with absolutely two different species, and we are the humans.  I have no idea what the zionists and their minions are, but they are not  human.  Of that I am most sure.

I gave up TV watching when they wanted to put the digital boxes in and I finally said,  "Not more" and gave it up.  I had no idea just how damaging to our brains it was until I quit watching.  Its been 5 years now and what a difference.  How I can tell is when I put in a video that have had forever to watch it for the 10th time, and it is completely different than I remember.

That has blown my mind.  The good news is, all those videos I was bored with and no money to buy new ones I am able to watch as if they are new.  Yahoo (thank goodness since the movies and TV programming are getting horrible now, bad taste, not funny, and totally perverted to fit with their social engineering us into something other than human, using the TV, movies and radio/music. 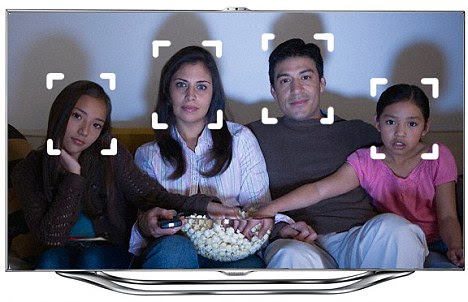 In "1984" (1949) George Orwell
foresaw a time when TV both programmed the viewer and served as a camera. Has that time come?


(Editor's Note: Except for link within, I cannot verify Adachi's claim re. monitoring.)

(This was sent as a comment in response to "Help! My Wife is a TV Addict!")

We stopped watching broadcast TV when they turned off the analog transmitters in 2009 and we haven't missed the moronic garbage being offered on VHF stations and slightly miss the more intelligent programs offered on  public TV and UHF stations.

Of course, there were many brain washing  "documentaries" from propaganda outlets like WGBH in Boston or Nova that would infuriate me, but there were also many good shows on Nature, science, history, archeology, or medicine that were enjoyable and educational.Anyone now watching broadcast "digital" TV is directly connected to the NSA and who knows how many military and government computers.  All modern plasma and flat screen TVs are embedded with microphones and cameras (in the screen) which are recording everything seen and heard in the room where the TV is located and is transmitting that information out of your home on the same carriers used to bring the digital signal into your spiffy looking, high definition, wide screen, flat panel TV set. (VN:  and all of  it being directly forwarded to Israel intel Mossad, which is not only illegal but treason at the highest levels of NSA AND THAT NEEDS TO BE ADDRESSED BY SOMEONE IN CONGRESS OR THE JUSTICE DEPT.  Oh,Silly  me, if they hold a position in either congress or justice dept, then they belong to the evil satanic ones.  Well, soon we will have to come together and create our own gov for us and ignore the PTB who have invaded our country and taken over.  It truly is going to be up to us to stop all this in the end.  Might as well face it and deal with it.)

The only way to be free of this surveillance is to NOT have  a digital TV "conversion" box in your home if you are using an older TV set, and to NOT have cable TV brought into your home.  Older CRT screen TVs made before perhaps 1995 do not have the embedded cameras and microphones, but the conversion box is bugged.We mostly watch video tapes of Japanese TV shows that are sent from Japan. Japanese TV shows are far more decent, moral and respectable than the unbelievable garbage and immoral swill being shown to American audiences. There is no comparison.

The Illuminati is making inroads into degrading the quality of Japanese TV shows by the steady and increasing diet of flamboyant, homosexual TV personalities, transgender types (called "new halfs" in Japan),  and the start up of the  FOX TV Immorality Channel in Tokyo last year; but overall, Japanese TV is closer to the decency we had in American television  in the 1950s and 60s.There are tons of video recordings in the library of high quality series made in the 1970s and 1980s that can replace the mindless and decadent trash offered on American TV.  YouTube is another expanding source of good video material and since anyone can make a video (or film) and post it to YouTube, I expect to see a growth industry in YouTube-presented documentaries,  dramas, comedies, etc., that could lead the way towards a new era of decency and morally uplifting entertainment.  (VN: Lord, I  hope so..... everything on now is so alien to me that I can't watch it even if I wanted to.)

If the Pajama People would only STOP watching the trash and stop patronizing the sponsors on American Garbage TV, the Garbage shows would stop going down the American Love Boat canal and TV producers would be forced to give the public the quality and DECENCY  of programming that they want for themselves and their family.  (VN: OK, good idea, boycott, filthy, scuzzy tv.)


Here are links to some articles I posted in 2008 and 2009 that talked about the switch over to digital TV and the references to embedded microphones and cameras.

The Sound of Silence: The Antithesis of Freedom by A. True Ott, PhD, ND (Dec 12, 2008)
http://educate-yourself.org/cn/soundsofsilence11dec08.shtml

Makow Comment - Thanks Ken. And you didn't even mention commercials which insult our intelligence and contain many social messages.
When I watch football, I can't believe how many times they repeat the same commercial. Corporations like GM and Nissan act like they can't afford more than one!

Other shows make the viewer sit through 4-5 minutes of ads. The way of the future is to watch YouTube or Netflix on TV. There you you can be selective and watch commercial-free.
First Comment from Tim

Edward Snowden was hiding his face while computing, from his room in Hong Kong, while the reporter from the Guardian was there.  He explained, with the facial recognition capability the NSA has, they would find his IP instantly, if he showed his face to his screen unmasked. He is certainly in a  position to know.  So, that's one more thing we should all understand.

As to the modern televisions, I questioned several engineers and computer experts on this over the past few months (online).  What they ALL told me was, yes.  The modern televisions have camera and mikes, but not all of them, and not all of them work very well.  What they do, they unplug the cable box from the wall.  It cuts the link.  Just because the tv is off does not mean the surveillance is off.  It remains on.  So, at the minimum, unplug the cable box from the wall, when it is not in use.

Secondly, in a hotel room, they place a sheet over the tv.  Not only can the NSA and Mossad watch you, computer literate Patels can rig it to watch you as well, and some do.  I stay in hotels several nights a week, and I can tell you, since I starting putting the sheet over the television, three times the Patels knocked on my door and were looking around, immediately after I did it.

The engineers are correct.  The Patels were watching.    These businessmen weren't doing so for normal reasons.  This is some kind of government requirement.  If the tv gets covered up, the requirement must be to come physically and look around the room.  That's what they did.     (I should explain, here in the States, a lot of televisions in the hotel rooms now cannot be unplugged.  The plug and wires and encased, and fit into the wall, and cannot be unplugged )

In short whether on a computer or a television, the link is 2 way when it is on.  They are watching.  When it is off, they are still watching, unless you unplug it.  And they can turn your computer on and off remotely.  If you want to cut the link on your laptop for sure, remove the battery.  Same for the cellphone.   A couple of engineers told me, they just pack it in an aluminum case.  It blocks the wifi snoops.

The only reason Television or movies were layered with a veneer of 'wholesome goodness' was due to a few wealthy tycoons and a large agricultural base population behind enforcement of The Motion Picture Production Code (aka Hays Code, 1930-1968) [1] , and The Code of Practices for Television Broadcasters (1951-1982). [2]

I grew up during the last decades of these codes, and was deeply corrupted by the so-called "wholesome" days of B&W television. The problem is when everybody grew up on television nobody sees what's it's doing to their minds, their judgement, ethics, morals, reasoning ability, attention span, and especially how it interferes with the normal trajectory of human activity.

40 years ago I met exchange students from places that didn't have television, and had never seen American television.  They were more shocked by looking the effects of television on Americans watching it, than the content of the programs.  One fellow told a roomful of us college students engrossed in a 'show', "you don't know what that's doing to your minds", and left.

Which is what all of you should do.  Get the set entirely out of the house, and if you're not ready for that, at least cancel the satellite or cable subscription and watch videos you've chosen yourself.   I challenge everyone to at least go entirely without broadcast television for ONE YEAR, then go watch a few hours of programming some night in a laundromat or public venue with lots of other people around.   You will see some slack-jacked, passive faces, no reaction to the absolutely demonic slime oozing out of the HDTV sets after dark.

If you're in the habit of  watching tv an hour or more a day you're desensitized to what it's doing your mind, body and soul.

[1] http://en.wikipedia.org/wiki/Motion_Picture_Production_Code
[2] http://en.wikipedia.org/wiki/Code_of_Practices_for_Television_Broadcasters - See more at: http://henrymakow.com/2013/09/TV-both-Watches-and-Warps%20.html#sthash.KByTIaKX.dpuf
The article is reproduced in accordance with Section 107 of title 17 of the Copyright Law of the United States relating to fair-use and is for the purposes of criticism, comment, news reporting, teaching, scholarship, and research.
Posted by Vatic Master at 1:00 AM