Conspiracy Too Monstrous To Conceive

Vatic Note:  This was one of the best and extremely informative write ups on this subject I have ever seen.  Good job, Makow.  How important is this knowledge to our understanding of our problem and how to address it?   Its critical and essential or we will never dig out the root of this centuries old problem that never changes,  but simply continues on from generation to generation and country to country.   So after reading this, I have decided to do a whole series just on the "Kabbala" so you will understand why this is so dangerous to our nation.

The recent blogs we did on the Satanic Ritual abuse of the illuminati children   will also help to explain why these secret societies are so important.  The "rescuer" that we identified in that sexual ritual abuse becomes the adult childs mentor in These secret societies and is responsible for training the adult victim in all the occult aspects of the society and in his designated job in the future as part of the program to bring the nation down.

The mentor in these secret societies works in the same field the student is designated to go in, so if its military and he is to be the Chief of staff, then he is mentored by the high up pentagon official close to the top or at the top.  Same applies to university jobs, science, politics, such as President or Congress.  What I have learned is that since JFK, you do not reach the top unless you are designated to do so by these illums.

The legit children go to the prestige universities,  and the illegal offspring of these illums attend either Oxford, or a lesser Univesity but still in the control of the illums.  Clinton attended Oxford and Obama a lesser University, although still an illum institution with a secret society, such as Columbia.  Zbig was his mentor there as one of this so called professors.  Having said that, there is still some debate as to whether Obama ever attended any college.  Records are almost impossible to find.

For a president, his handler and Skull and Bones Mentor, is generally his chief of staff or Vice President depending on how much handling he needed, such as Bush Jr was bordline out of control, so his handler was his VP.   That is why every single western nation has these societies.  The CFR is the holding group for the mentors and the victims to assure their understanding and commitment to the centuries old agenda, and to supply the most closely housed staff to the President, both for aid and assistance to him, and to manage him so he does not go off course from that which he was trained to do.

It also explains why elections had to be rigged.  These illums could not afford for someone not in their group  to win the election like JFK did.  Othewise, they have to assassinate them and that is a huge risk.

"The individual is handicapped by coming face-to-face with a conspiracy so monstrous he cannot believe it exists." J. Edgar Hoover
The world is in the malignant grip of a satanic cult.

People recoil at the suggestion but proof stares us in the face every day.
George W. Bush, President of the "Free World" is a member of "Skull and Bones" a chapter of the Illuminati order. His father, grandfather and uncle are also members. 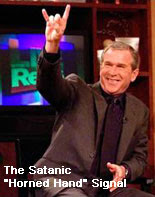 In his autobiography, "A Charge to Keep" Bush writes, "My senior year I joined Skull and Bones, a secret society so secret I can't say anything more." In Aug. 2000 he said his "heritage is part of who I am."

Isn't this a conflict of interest?

Hello! Can a man hold any public office, let alone the most important, and belong to a "secret society"? If this society were benign, would it have to be secret?

What a secret society it is! The Illuminati is the hidden hand behind all modern cataclysms, including the French and Russian Revolutions, Communism, the Depression and Nazism. To affect the course of history only takes money. The people behind the Illuminati have plenty.  (VN: Khazar Zionist bankers sound familiar?)

It's time we faced reality. Murphy's Law applies to humanity. "If it can go wrong, it will."

It has. The world is ruled by a satanic cult.

THE ILLUMINATI AND THE SKULL  BONES

The Illuminati originates in the Jewish Kabala, Babylonian mystery cults, the Templars, Freemasons and assorted interests dedicated to Satan worship and absolute power. On May 1 1776, Adam Weishaupt, a professor at the University of Inglestadt in Germany, founded "The Order of the Illuminati." Many people believe Weishaupt was sponsored by Prince William of Hesse Casel and his banker Meyer Amschel Rothschild, the wealthiest man in the world.

The Illuminati's goal was to destroy Western Civilization and to erect a new world order ruled by them. Its method was to dissolve all social ties (employer, nation, religion, race, family) by exploiting social discontent and promising a golden age of "human brotherhood." This is now called "globalization."

Attracted by the promise of power and change, people served without realizing who or what they were supporting. Weishaupt urged his followers to "practise the art of counterfeit." New recruits were told the Illuminati expressed the original spirit of Christianity. Weishaupt marvelled that even churchmen could be gulled. "Oh! Men, of what cannot you be persuaded?" (Nesta Webster, World Revolution, 1921, p. 27)

The Illuminati had a hand in every so-called "progressive" movement of the past 200 years. Women, said Weishaupt, were to be enlisted with "hints of emancipation." They "can all be led toward change by vanity, curiosity, sensuality and inclination." (Webster, 29)

William Huntington, an American who had studied in Germany, founded the "Skull and Bones" (Chapter 322 of the Bavarian Illuminati) at Yale University in 1832. The members wore a death's head on their chests (VN: go back and look at the photos of the seals at the Boston Bombing,  they had the skull on the caps and chest, which we thought was the symbol of the seals.) and were sworn to secrecy on pain of death. "The Order" became the preserve of the leading New England families, many wealthy from the Opium trade. These include the Whitneys, Tafts, Buckleys, Lowells, Sloans, Coffins, and Harrimans. The Bush family was dependent on these interests.

"THE BATTLE IS NOT BETWEEN LEFT AND RIGHT" 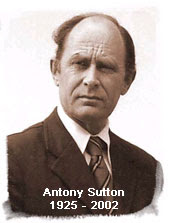 In the 1960's British-born Dr. Anthony Sutton was a Fellow at Stanford's Hoover Institute when he discovered that, in spite of the Cold War, the US was supplying the USSR with its technology, including weapons used against American soldiers in Vietnam. Sutton dug deeper and discovered that Wall Street had sponsored both the Bolshevik Revolution and the rise of Nazi Germany. The resulting books which are on line cost Dr. Sutton his academic career.

In 1983, Dr. Sutton received a list of Skull and Bones members and immediately recognized the names of many men who controlled American policy. He published a book entitled "America's Secret Establishment: An Introduction to the Order of Skull and Bones" (1986). He updated and republished this book just before his death last June at age 77. Here are some of his conclusions.
COGNITIVE DISSONANCE Bizarre as it sounds, our world is the product of a multi generational satanic conspiracy.
(Believe me I would give everything I own to be wrong.)

When we compare this disturbing conclusion with the comforting picture purveyed by Illuminati controlled-mass media and education, we experience "cognitive dissonance," or psychological stress. This is usually resolved by evading reality, dismissing it as "conspiracy theory."

One reader, stirring in his sleep, wrote: "You sir are T-TOTALLY the biggest story teller I have ever heard. If I ever get really bored I will read some of your concockions."

In fact, conspiracy is very plausible. People who control a grossly disproportionate share of the world's wealth will take measures to consolidate their position. They will destabilize the public by inciting a series of wars and other mind-boggling hoaxes (communism, lesbian feminism, multiculturalism). They will subvert faith in a loving God and promote violence and depravity (Satan) instead.

The government-inspired 9-11 atrocity proves a satanic cult controls the US. Bush and his accomplices are criminals, traitors and impostors. But don't look to the Democrats for salvation. Leading contender Sen. John Kerry is also Skull and Bones (Class of 1966.)

The "War on Terror" is obviously designed to forestall domestic opposition and condition people to further subjugation and new world order. What can we do?
Antony Sutton had it right when he said opposition should be individual in character. It should "take ten thousand or a million forms."  (VN: as we have stated often,  we are creative beings and they are not, so we have the advantage.  They cannot even guess what path we will take and they are learning that we won't take the same path together which makes it difficult for them to war game or control the process or the outcome.  We just have to use our power of imagination and creativity and non cooperation.  Does Oregon "GMO burn ring a bell?"  And that is only one of a million options).


- See more at: http://www.henrymakow.com/000166.html#sthash.GyRRh8eP.
The article is reproduced in accordance with Section 107 of title 17 of the Copyright Law of the United States relating to fair-use and is for the purposes of criticism, comment, news reporting, teaching, scholarship, and research.
Posted by Vatic Master at 1:30 AM