Vatic Note:  See?  Putin is using the exact same tactic that the foreign occupiers of our government use to deal with opposition here in our elections.  I told you he was part of the cabal.  Russia is still run by khazar Zionists and there is no way he would be in the position he is in if he were not endearingly behaving as they want him to.  When I saw Medeyeve give the "Baphomet" had sign to Putin, I knew right away he was gone.  Why they are trying to make him out to be a nice guy for our consumption, is beyond me?

Lets not forget all the joint military training of Russian troops here on our soil, and sold to us as teaching the Russians our military tactics.  Now why do you suppose that is?  Something to do with losing WW III?  I bet it is.  Then we read Chinese troops were joint training here as well, like the powers that be did not know they were both going to be our designated enemy for this BOGUS WW III.

We did a whole blog with mega proof of the agenda, that the USA is the designated losers of WW III, and foreign troops are to occupy our soil to protect the zionist khazars here so they can continue their movement toward a slave society in America.  Its beginning to look like Communism is the last stage leading to Fascism.  I always wondered why the Zionists always seemed to support communism, and now I understand it.

My question is,  what if this man below wins the election?  What will Putins' people do to him if anything?  It will be interesting to watch how this all unfolds, but in corruption, it appears we are already globalized since everyone is using the same slimy tactics now, so it appears the zionists are gaining control of the planet.


The Kremlin says Yaroslavl Mayor Yevgeny Urlashov solicited a massive bribe. He says he's being targeted for his anti-establishment views. 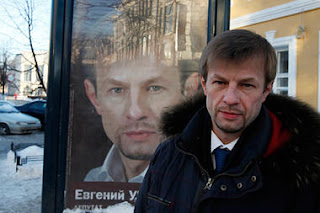 The popular mayor of the Volga industrial city of Yaroslavl, Yevgeny Urlashov, has been detained on suspicion of corruption and extortion, just a few months before he was to head an opposition ticket in upcoming regional elections.

Mr. Urlashov insisted Wednesday in an interview with the Internet TV station Dozhd that the charges against him are politically motivated.

"I had been warned that they would get me out of the picture by any means possible," he said.

The Kremlin's Investigative Committee said he and two aides are under suspicion of soliciting a $425,000 bribe from a private company in exchange for lucrative contracts to perform municipal services. Urlashov says his accuser is a prominent member of the pro-Kremlin United Russia party.

Running as an independent in the April 2012 mayoral polls in Yaroslavl, he overwhelmingly defeated the Kremlin's chosen candidate, Yakov Yakushev, with almost 70 percent of the vote.

That electoral upset triggered alarm bells in United Russia headquarters, and put authorities on notice that pro-Kremlin candidates are vulnerable to defeat – despite the concentration of official resources deployed on their behalf in Russia's system of "managed democracy" – especially when the opposition is well organized and fields an experienced and capable candidate.

Russian news reports say Urlashov was detained at a police checkpoint on Tuesday night. Plainclothes officers dragged him from his car and placed him in detention before proceeding to search his home and offices. He was expected to head Civic Platform's candidate list for the regional legislature in September.
"Putin's regime has consistently tried to avoid overtly pressuring and prosecuting people for being political adversaries," says Masha Lipman, editor of the Moscow Carnegie Center's Pro et Contra journal.

Instead, she says, the government has become a "mastermind of selective law enforcement," using anti-corruption charges to hobble opposition figures, creating and changing the law at will to service its attacks. (VN: sounds very familiar in strategy.... "and by deception, we will conduct war")

"It's also important to remember that in Russia's shadow economy, informal practices are ubiquitous. It's almost impossible to do any kind of business without engaging in something that's a legal gray area," she says. "

That makes virtually everyone vulnerable.... Hence the authorities are able to decide who to prosecute, and how hard to go after them. It's a useful way to intimidate everyone and remove unwanted political players, while at the same time claiming that it's really all about fighting crime and corruption."

Hundreds of regional and municipal elections are slated for September, including a crucial mayoral contest in the capital Moscow, where the pro-Kremlin incumbent Sergei Sobyanin is so leery of the increasingly-toxic United Russia label that he has chosen to run as an "independent" candidate.
Mr. Prokhorov's Civic Platform party will be staging a challenge to Mr. Sobyanin in Moscow, where anti-Kremlin moods are stronger than any other part of the country.

Much controversy has swirled around Prokhorov, whose last attempt to launch a Kremlin-approved liberal party crashed and burned when he publicly defied the organizational micromanagement of then-Kremlin "puppet-master" Vladislav Surkov, and was punished by being driven out of his Right Cause party by loyalists of Vladimir Putin.

Prokhorov has since kept a very low profile and avoided any actions that might might put him into the Investigative Committee's sights, and perhaps lead him to share the prison fate of another billionaire tycoon who overstepped Kremlin bounds, Mikhail Khodorkovsky.

But the arrest of Urlashov can be read as a clear challenge to Prokhorov to tone down Civic Platform's ambitions in advance of the September elections.

It's not clear how Prokhorov will react. But on Wednesday he insisted in his LiveJournal blog that he intends to go ahead and attend a Civic Platform conference in Yaroslavl this weekend and lend all possible support to Urlashov.

"The demonstration seizure of the elected leader of the city [Yaroslavl] is a blow to the civil liberties of every Russian citizen," Prokhorov wrote.

"It's obvious that this night time "mask show" [by balaclava-wearing cops] was arranged with the sole purpose of intimidating Yevgeny [Urlashov] personally, as well as all independent politicians and simply active citizens of Russia," he wrote.


RECOMMENDED: Do you know anything about Russia? A quiz.