5-Year-Old Boy Suspended for Cowboy Cap Gun, Interrogated Until He Wet His Pants -

Vatic Note:  Well as you can see, I got a bit hot under the collar in reading this and put some VN's inserted into the text.  That means I don't have much to say up here, but this is another important peg in the issue of Federalized schooling.  We spent most of our history as a nation schooling locally, with our local school boards and parents and teachers all working together and we ended up 2nd in the world in education.

Notice the difference between this boy who goes to a federalized public school, and the boy in the previous blog who is home schooled, what a difference.  This boy below is now fully fearful of the state and its overwhelming power and he will no longer be able to finish his development in his magical state of development.  He will be afraid to go there.  Maybe that is an issue we can address without the politicians having to play a role in any of it.  I will think on it since I am getting ideas already on how to skirt around that system that isn't working.

We are 39th and dropping, under the Feds, with an obvious disregard for teaching that the feds show, and using fear and indoctrination as the two goals of education now.... that and sexualizing our children so they will be much easier to pedophile.  I am so disgusted that I think its time to make a decision.  Get your elected officials to place school control back with the local community or everyone do homeschooling and let the schools shut down.  Or wait til I can come up with a plan  that is hatching in my brain right now.  LOL

The schools are useless as they stand today, so being shut down will actually be an improvement.  First the bogus ADHD disease and drugging, and now violation of parental rights to be with the child during such gruesome and abusive grilling.  Parents would be prosecuted for child abuse if they did that to their children and would have lost custody of them.  That is why its important to seriously consider options away from federal control.   After what we have just gone through and are still going through, we now know why they want control of our children.  Forget it. Take control back again.

5-Year-Old Boy Suspended for Cowboy Cap Gun, Interrogated Until He Wet His Pants
http://www.thedailysheeple.com/5-year-old-boy-suspended-for-cowboy-cap-gun-interrogated-until-he-wet-his-pants_052013
by Daniel Jackson, May 31, 2013 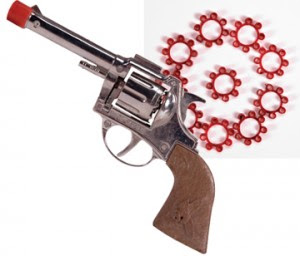 In a shocking display of the anti gun hysteria now plaguing public schools through the country, the Washington Post is reporting that a 5-year-old boy from Calvert County, Maryland was suspended for the rest of the year after bringing a toy gun onto his school bus.

The boy was also interrogated by school officials for over two hours which caused the child to wet his pants in fear.  (VN: typical 5 year old, but then school  has become the place to train our children to grow up into fearful adults with no will or mind of their own, that is why we have to defederalize the schools.  Those administrators who did that would have been fired had they been  under local control.  No question about it, its blatant and radical child abuse of the worst kind)


The child was questioned for more than two hours before his mother was called, she said, adding that he uncharacteristically wet his pants during the episode. The boy is 5 — “all bugs and frogs and cowboys,” his mother said.


According to the family, the boy’s friend had brought a water gun on the bus a day earlier. On Wednesday, unbeknown to his parents, the boy stowed his cap gun — from Frontier Town near Ocean City — inside his backpack as he left for school.
He told his mother after the incident that he had “really, really” wanted to show his friend.
The mother was called by the principal at 10:50 a.m. and was told that her son had the cap gun and pretended to shoot someone on the bus. She said that both the kindergartner and his first-grade sister, sitting nearby on the bus, disputed that account.
{…}
For the family, a major concern is the long period the 5-year-old was questioned without parental guidance or support. His sister was questioned, too, she said.

“The school was quite obviously taking it very seriously, and he’s 5 years old,” she said. “Why were we not immediately contacted?”
The family’s attorney, Robin Ficker, said that the age of the child is important and that the incident could have been used as a teachable moment.

This anti gun hysteria will continue as long as the corporate controlled media and elements of the federal government continue to push their gun control agenda by using dead children and family members as props for their political ambitions.

- See more at: http://www.thedailysheeple.com/5-year-old-boy-suspended-for-cowboy-cap-gun-interrogated-until-he-wet-his-pants_052013#sthash.Vv1YF6Mz.dpuf
The article is reproduced in accordance with Section 107 of title 17 of the Copyright Law of the United States relating to fair-use and is for the purposes of criticism, comment, news reporting, teaching, scholarship, and research.
Posted by Vatic Master at 1:00 AM

I checked news accounts, and it's even worse than the article said. If the cap gun had had caps in it, it would have been deemed "an explosive device, and the police would have been called in.
In other schools, first and second graders were suspended for chewing "a Pop Tart-like pastry in the shape of a gun." One 5-year-old in Pennsylvania was suspended just for talking about a Hello Kitty "gun" that blows soap bubbles.
Here's the link to the article I read:
http://articles.washingtonpost.com/2013-05-30/local/39631287_1_cap-gun-permanent-school-record-look-alike-gun

Thank you for your interesting and informative blog. I have enjoyed reading it and appreciate the work you have put into it. Here is some relevant information for you to review .
military toy guns