***Fundraising:   Fund raising status is currently at $155,(we want to thank the generous person who gave a donation that dropped our deficit to that showing.Please be aware that the first of the mo is only 4 days away now, and that is hitting it pretty close and we are still a substantial distance from our deficit for the month. Please, know that we are fully aware of how difficult this time of year is, and we appreciate the choices one has to make during such times.

For us, its an indicator of whether we continue or do not, so please also understand we have no choice but to ask for your help. Unlike the MSM, we are not paid off by the powers that be. LOL We must rely on our readers whom we serve. We hope you can find it in your heart and pocketbook to send what you can to help us stay up at this critical time. Please support our efforts by donating off to the right of the blog where you see the Pay Pal button.

We wish to thank all of you who have supported this humble effort to educate and seek truth.   We thank you deeply for that.  Bless you all who visit, donate, comment, and contribute information to our efforts.We literally cannot do this without you.

***they wiped this completely out and I had to start all over again.  I actually think its better this time around.  I don't think they liked this one very much at all.  The PTB are really funny that way. There must be something to this if they spent the time removing it.

UPDATE:  See below - in Vatic Note: THIS IS MASS MURDER IF THEY DO THIS TO US AND TO THE GLOBE.   AND IT MUST RECEIVE JUSTICE IF THEY DO IT.  9-11 FALSELY LED THEM TO BELIEVE WE WOULD NOT SEEK JUSTICE.  THEY ARE WRONG!

Told ya, in a different blog, that the cretin psychopaths were way behind schedule in their take over of this nation.  This video below shows what I mean.  The CDC has had to continually ask for an extension to store those 500,000 plastic coffins on the owners land. This is the best video I have seen documenting and talking to the "right" people, like the owner of the land and others, to find out who owned the coffins and it was the CDC.

That explains why and who killed all those microbiologists since 2001.  89 of them as of 2008, and it could be more now.   They had expertise in DNA sequencing which tells the biologist which bioweapons facility made the bug, so they had to die.  Nice, huh?  This is worth the watch and add it to the fiasco in Europe by the Baxter company and how they got caught or 30 million Europeans would have died from that virus created by the CDC.

Since Honey is natures most potent anti-biotic, it makes sense now, why they had to kill off the bees.  It was an Israeli parasite that was killing the bees everywhere.  Gee, what a surprise.  NOT!!!!  I also relate to this guy who tried to warn people and he ran into a block wall of people who did not want to know about this.

UPDATE: This just came in through a different EMAIL source: Its an even bigger visual of what is contained in this article below.  This is what 500,000 of these look like altogether in the same place.  Some are now being shipped out to other parts of the east coast.   We saw with Sandy Hook, how they have now taken away a families ability to bury their own and turned it over to the state to do the burials, WITHOUT THE FAMILIES BEING ABLE TO SEE THEIR LOVED ONES AND SAY GOOD BYE TO THEM. WHOEVER HEARD OF SUCH A THING.  We can see it won't be very much of a burial, since these are satanists and could care less about bodies for resurrection, and that must have been a test run to see how we would take that news. 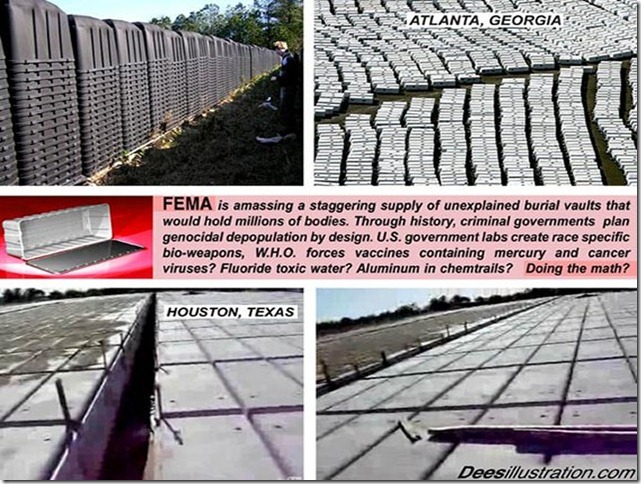 The question is, were these for bioweapons or more than just bioweapons?  Was there something they knew that we did not, that would increase the numbers of dead that required coffins for millions of Americans?  Well, take a look at the second video and see if that might not explain how these two events might be co-ordinated?  THEN KEEP IN MIND RAHM EMMANUALS FAMOUS SAYING "NEVER LET A GOOD CRISIS GO TO WASTE".  Then see how these two videos go together.

Denver was 67 degrees in January, and the snow we are getting in the mountains is not real snow.

Its being used (patented) to cool our atmosphere and right after the snow fall, the temps are very cold. So you watch, read and decide. But I think its an opportunity for the evil ones to do something to us that would result in those plastic liners to be needed. Or a series of several different events, one natural and two manmade. The natural, based on Rahm Emmanuals "never let a good crisis go to waste one is Nibiru or dwarf star and man made one is the bioweapon, to be released right after Nibiru does its thing, and/or the second is space weapons/haarp to finish us off.

As I also pointed out recently, I have seen the size of the sun which is huge compared to other times at this time of year.  Normally is like a golf ball in January, and this year it is the size of a basketball, which means either we have shifted way more than they say or its the dwarf star in front or behind the sun making it look much bigger.  You watch and decide.  Russia, unless they are in on the scam, has said otherwise.  If they were in on the scam they would do like NASA and say nothing. Just my humble opinion.

The article is reproduced in accordance with Section 107 of title 17 of the Copyright Law of the United States relating to fair-use and is for the purposes of criticism, comment, news reporting, teaching, scholarship, and research.
Posted by Vatic Master at 3:00 AM