ALERT: A True Greek Tragedy - Odyssey of the EU

Vatic Note:  This article is excellent,  boy I have been saying that a lot lately.  LISTEN AND READ CAREFULLY, WE ARE SEEING THE SLAVING OF GREECE AT THE HANDS OF THE ROTHSCHILD CONTROLLED EU.  GREECE IS THE TEST RUN FOR THE REST OF THE GLOBE ONE COUNTRY AT A TIME.  Now after watch and reading this about Greece, and the EU,  then think "NAU" and how they will do the same thing here to each of our countries and I suspect Mexico will be  first with the rest of us slaving right  behind.  Notice its none of the black nobility countries like Germany, France, or Britain, London more specifically.  Its Italy, Portugal, Spain, etc.

More and more is coming out and its exposing the banking internationalists who work for the Black Nobility, all over the place.  I finally feel vindicated.  My Partner and I used to get banned all over the net, both left and right sites who were funded by foundations,  just for saying the bankers are the problem, and heaven forbid if we should ever mention Israel in the same breath.  That is how Vatic Project got started.   Now its all coming home to roost right where it belongs:  on the bankers and their masters..... the black nobility and their country Israel.

Remember, Geithner and Summers did this type of work for the Rothschild Goldman Sachs as assigned to the IMF to destroy and take control of third world countries and now instead of a better world for those countries they are raped and pillaged everyday of their natural resources with no return to the country itself.  THAT IS HOW AND WHY THE BANKERS FORCE COUNTRIES INTO DEFAULT OR INVADE THEM LIKE LIBYA AND JUST FLAT OUT STEAL THEIR RESOURCES AND THEY DO THIS FINANCIALLY,  SO THEY CAN CONFISCATE THE LAND AND NATURAL RESOURCES THROUGH THE DEFAULT PROCESS.   Its time to take the land back or make them fight for it and risk losing their lives like any other aggressor would do and do it honorably instead of all this sneaking around like a bunch of cockroaches or slimy worms,  apology to the bugs and worms. NO MORE USING THE USA TO DO YOUR DIRTY WORK, DO IT YOURSELVES LIKE A MAN AND TAKE THE CHANCES THAT COME WITH IT.  When Israel/Rothschild is done with us, this is exactly what they will do to us. 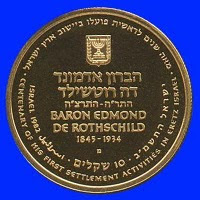 By: BATR, Market Oracle
Prime Minister George Papandreou’s gambit calling for a Greek referendum on the draconian EU extortion is proof positive that state sovereignty is dead. It failed because the EU cabal would not allow self-determination. Servicing the debt is the supreme dictate. The analogy of the arrogant and obnoxious Antinous wooing Penelope as a right of entitlement, applies. The righteous outrage of Odysseus’ arrow shot through the throat of all the EU suitors, also applies. Today’s script does not fit the noble triumphs of Homer’s epic. The banksters are more powerful than the intervention of Athena. 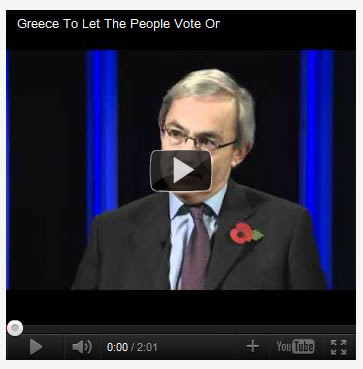 How quickly the defiant Greeks were put back in line. The video Greece To Let The People Vote On EU Bailout turned into Greek Government Teeters, Lawmakers Urge PM to Resign.
The Globe and Mail reports, Greece backs off referendum, dealing blow to euro-zone equality,

"In an effort to avoid a financial catastrophe, Europe’s leaders persuaded Athens late Thursday to back away from a referendum, but the result, which involved threats to expel Greece from the euro zone, has destroyed any sense of democratic solidarity uniting them."

"This is obviously a decision the Greeks have to make," French President Nicolas Sarkozy said, "but I think the strong preference of everybody around the G20 table would be for progress to be made toward the package the European Union put together last week," rather than a referendum. "I think that’s a strong preference."

In one rare spark of insight, the progressive statist proponent Robert Reich actually asks the proper question, Greece’s Choice — and Ours: Democracy or Finance?


"Shouldn’t Greek citizens make this decision for themselves?
Of course, if Greek defaults on its loans, global investors (fearing that a default in Greece sets a dangerous precedent) may yank their money out of Italy. This would almost certainly bust several big European banks – and generate panic on Wall Street. That’s why Tim Geithner has been pressing Europe to bail out Greece."

Patrick Henningsen writes in the article, Another military coup in Greece – can you blame them?


"If the government is in danger of collapse, then Greece could be looking at a genuine military coup d’etat.

This theory has gained credence since Athens announced a wild reshuffle, sacking its military leaders in every branch of the forces on Tuesday. The defense ministry confirmed that Greece’s state Security Council replaced the heads of the general staff, the army, navy and air force, and discharged a score of army and navy officers."

Alas, the gallant crew of Odysseus are all dead at the hands of a vindictive Poseidon. The EU cannot tolerate adventurism and needs to make kings into beggars.

The EU Cyclops not only wants to devour the Greeks, but also wants to imprison the next generation for future meals. The central banksters act like the six-headed monster Scylla. They seek perpetual serfdom and a burden akin to Sisyphus pushing his boulder up the eternal hill. Welcome to the realm where the suffering of Tantalus, eternally punished with hunger and thirst, surrounded by water and tempted by grapes, is now commonplace for the Hellenian slaves.
The plight and trials of Odysseus become universal under the global gulag of debt created tyranny. The rule of compound interest is the ultimate peril from the gang of suitors that court the hand of Penelope, not for partnership bliss, but for control. Doom them to the bowels of Hades. All Greeks are now Ithacans.
The neutralization effort for a popular vote and a plan for a caretaker government, demonstrates the financial muscle of the shadow gangsters that run the EU experiment. Yet, this last minute stopgap measure, is but a temporary band-aid on a terminate patient.

Press TV viewpoint and the video on the Greek PM wins vote of confidence, is revealing.


Papandreou gave an address to parliament for more than half an hour, saying that "immediate elections will be catastrophic," but he would be prepared to negotiate a power-sharing settlement, the state-run BBC reported.

Papandreou said the economic bailout deal for Greece currently on offer by the European Union had to be accepted, and it would be "historically irresponsible" to lose it, though he is "past caring about his power and post."

Greg Hunter of USA Watchdog forecasts, "You cannot tell millions of Greeks there will be a vote on a massive debt deal and then say just kidding, not going to happen. You can’t put that genie back in the bottle. I predict there will be a vote by the Greek people one way or another. It will be a nice, neat nationwide referendum or protests in the streets." 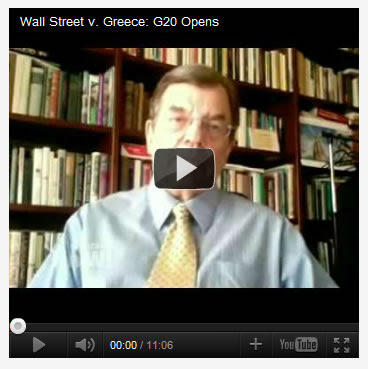 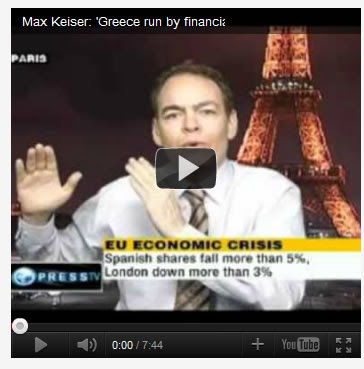 Michael Hudson provides a forceful analysis in a Democracy Now video, Wall Street v. Greece: G20 Opens as Greek PM Pushes For Referendum on EU Bailout Plan. Contrast this liberal interpretation with Mad Max Keiser’s outburst calling a talking head - toady for the globalists. "Sounds like a Nazi collaborator defending a rapist", in Greece run by financial terrorists defined the nature of the combat. Both share the same viewpoint that a forced Greek austerity only benefits the banksters.
Wheeling raw power has seldom been so clear. When Hank Paulsen threaten the U.S. Congress with martial law or approve the TARP theft, he wanted a mere $700 billion bailout. The stakes are raised; Greece must surrender the entire country to the master of the real and only true global empire. As the mass media spins the bleb of populist democratic clout, as a horrific thought, the vultures swarm for the pickings of the choicest Greek islands.


Euripides’ style of Greek Tragedy, as the interpreter of this type of divine comedy, best reflects the psychopathic impulses within the EU charade. The play Bacchae has the god Dionysus, the personification of the liberating spirit of wine and revelry, responds to doubters of his divinity. He claims that he has "driven the women of Thebes mad and sent them to the hills around the city, where they wear the animal skins of bacchants, priestesses of Dionysus, carry the ivy-entwined thyrsus (a symbol of his worship), and dance and sing hymns of praise to the new god."

To worship Dionysus, the Chorus sings, followers need only to crown themselves with ivy, wear deer skins lined with goat hair, carry the branches of oak and fir trees, delight in the bounty of the vine, and make ritual animal sacrifices. If they do, the land will overflow with natural beauty and riches—fawns and goats, wine and honey.

Contrary to the characterization that the Greeks are lazy, need to suck it up, institute higher taxes, start embracing thrift, restraint and frugality; the central banksters are the true dispensers of greed and drunken lust of power. The four horsemen of the Acropolis hangs over all of the EU, not because of Greek defiance, but because they will not yield to the armies of the financiers.


In the article, EU Bonds Rollover Debt with a Chinese Bailout, published on September 18, 2011 predicted, "Greece is the Sarajevo in the start of the next currency world war. A containable matter ready to snowball into a full-scale mobilization of competing factions, poses the unwinding of world markets." Now you see this confrontation erupting into open warfare, not through a face off from phalanx corps, but in the struggle to prevent the collapse of the global debt created fiat currency model.
Learn the lesson that Euripides taught in Bacchae. Pentheus, the king of Thebes, stands as a symbol in the play for all those who opposed the cult of Dionysus and denied the erratic, emotional, uninhibited longings within all human beings. The criminal banking institutions that want to exemplify Dionysus’ god like supremacy, needs to be defeated. In ancient times, a Pentheus or an Odysseus could wield the sword and destroy the beasts. Today, only the strength of a united world body of individual citizens, exercising civil disobedience, can bring down the evil banking system.
Those corrupt uninhibited longings exist in all of us, because of our fallen nature. However, the globalists have weaved a system of universal slavery based upon their manipulation of money. They can be defeated. Have the courage of a Greek hero and take control of your own destiny. This tragedy is an existential test. Appreciate the absurdity of compliance with the New World Order, and apply comic relief, to those who follow commends of the EU Poseidon ship of state.
SARTRE
The article is reproduced in accordance with Section 107 of title 17 of the Copyright Law of the United States relating to fair-use and is for the purposes of criticism, comment, news reporting, teaching, scholarship, and research.
Posted by Vatic Master at 3:00 PM