Could this be the biggest find since the Dead Sea Scrolls? Seventy metal books found in cave in Jordan could change our view of Biblical history

Vatic Note:  The very first question that came to mind was "Why are we hearing about this 5 years after the find???"  Then other questions followed:     Why are academics divided as to authenticity today when they had 5 years to resolve the issue?  Why are they having trouble translating the plates?    Its fascinating however, to think these may well have been touched by the hands of those who walked with Jesus in those days. Read it, its a change of pace for us, but also tied in.  Remember, the PTB intended to globalize religion as well, so is this one of the ways?  They were going to base that one world religion one of two ways or both,  which included archeological finds,  and the other was an event from the sky (holographic technology) that would bring the planet together with the real true religion, whatever they decided it was to be.   We won't know about that til the metal plates are translated.


Could this be the biggest find since the Dead Sea Scrolls? Seventy metal books found in cave in Jordan could change our view of Biblical history
http://www.dailymail.co.uk/sciencetech/article-1371290/70-metal-books-Jordan-cave-change-view-Biblical-history.html
By Fiona Macrae
Last updated at 8:36 PM on 30th March 2011


For scholars of faith and history, it is a treasure trove too precious for price.
This ancient collection of 70 tiny books, their lead pages bound with wire, could unlock some of the secrets of the earliest days of Christianity.


Academics are divided as to their authenticity but say that if verified, they could prove as pivotal as the discovery of the Dead Sea Scrolls in 1947. Lines of inquiry: The metal tablets could change our understanding of the Bible
On pages not much bigger than a credit card, are images, symbols and words that appear to refer to the Messiah and, possibly even, to the Crucifixion and Resurrection.
Adding to the intrigue, many of the books are sealed, prompting academics to speculate they are actually the lost collection of codices mentioned in the Bible’s Book Of Revelation.

The books were discovered five years ago in a cave in a remote part of Jordan to which Christian refugees are known to have fled after the fall of Jerusalem in 70AD. Important documents from the same period have previously been found there.

Initial metallurgical tests indicate that some of the books could date from the first century AD. 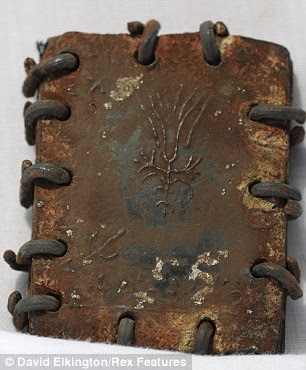 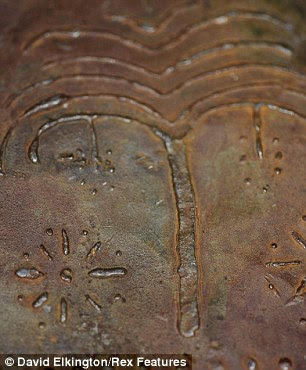 Revelation: Experts speculate that the tablets could be the lost collection of codices referred to in the Bible's Book Of Revelation 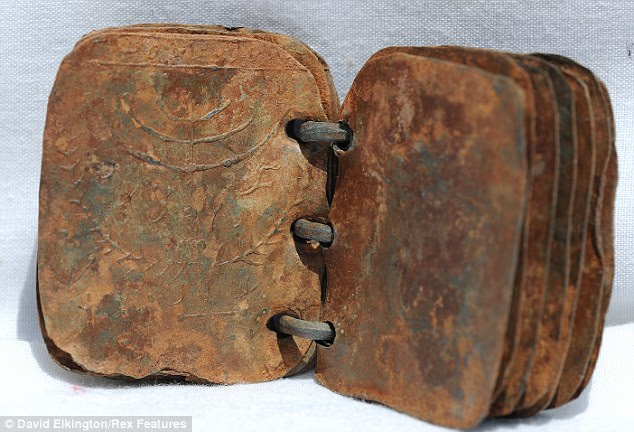 Hidden meaning: Scrolls, tablets and other artifacts, including an incense bowl, were also found at the same site as the tablets 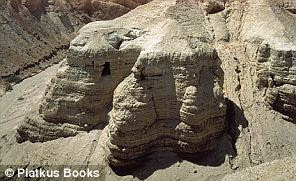 The Dead Sea Scrolls, counted among the most important archaeological finds of the modern era, were discovered in a cave (pictured) by a Bedouin shepherd in the West Bank.
The scrolls consist of 30,000 separate fragments making up 900 manuscripts of biblical texts and religious writings from the time of Jesus.


The scrolls include the earliest known copy of the Ten Commandments, an almost complete Book of Isaiah and many of the Psalms.    Some of the texts were damaged by well-intentioned restoration attempts since the 1950s that included the use of Sellotape, rice paper and perspex glue.    This estimate is based on the form of corrosion which has taken place, which experts believe would be impossible to achieve artificially.The fragile parchment and papyrus fragments have been the subject of intense study for more than half a century by an international team of scholars who are still trying to understand the significance of some 30 per cent of the texts which are not included in the Bible or any other previously known religious writings.
If the dating is verified, the books would be among the earliest Christian documents, predating the writings of St Paul.

The prospect that they could contain contemporary accounts of the final years of Jesus’s life has excited scholars – although their enthusiasm is tempered by the fact that experts have previously been fooled by sophisticated fakes.

David Elkington, a British scholar of ancient religious history and archeology, and one of the few to have examined the books, says they could be ‘the major discovery of Christian history’.

‘It is a breathtaking thought that we have held these objects that might have been held by the early saints of the Church,’ he said.

But the mysteries between their ancient pages are not the books’ only riddle. Today, their whereabouts are also something of a mystery. After their discovery by a Jordanian Bedouin, the hoard was subsequently acquired by an Israeli Bedouin, who is said to have illegally smuggled them across the border into Israel, where they remain.

However, the Jordanian Government is now working at the highest levels to repatriate and safeguard the collection. Philip Davies, emeritus professor of biblical studies at Sheffield University, said there was powerful evidence that the books have a Christian origin in plates cast into a picture map of the holy city of Jerusalem. 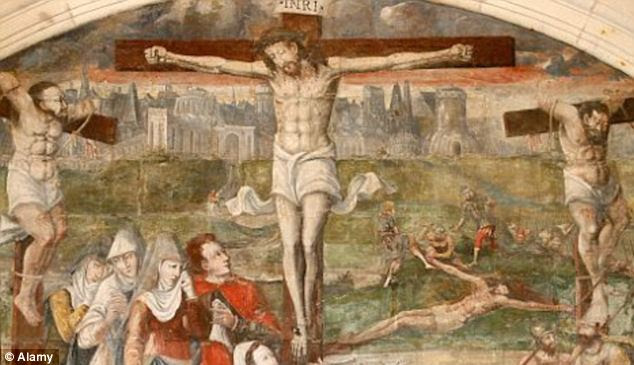 A 16th century painting depicting Jesus's death. The metal books contain pages with images, symbols and words that appear to refer to the Messiah and, possibly even, to the Crucifixion 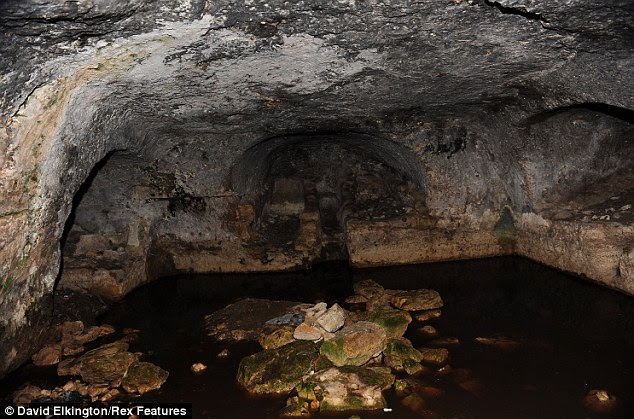 X marks the spot: The cave in Jordan where the artifacts were discovered 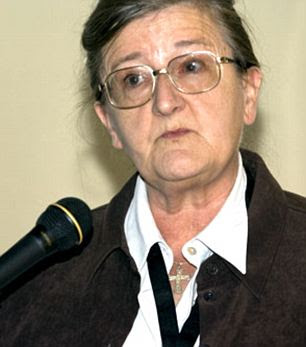 Dr Margaret Barker, a former president of the Society for Old Testament Study, confirmed that a sealed book is mentioned in the Bible
‘As soon as I saw that, I was dumbstruck,’ he said. ‘That struck me as so obviously a Christian image. There is a cross in the foreground, and behind it is what has to be the tomb [of Jesus], a small building with an opening, and behind that the walls of the city.

‘There are walls depicted on other pages of these books too and they almost certainly refer to Jerusalem. It is a Christian crucifixion taking place outside the city walls.’

The British team leading the work on the discovery fears that the present Israeli ‘keeper’ may be looking to sell some of the books on to the black market, or worse – destroy them.

But the man who holds the books denies the charge and claims they have been in his family for 100 years.

Dr Margaret Barker, a former president of the Society for Old Testament Study, said: ‘The Book of Revelation tells of a sealed book that was opened only by the Messiah.
‘Other texts from the period tell of sealed books of wisdom and of a secret tradition passed on by Jesus to his closest disciples. That is the context for this discovery.’ 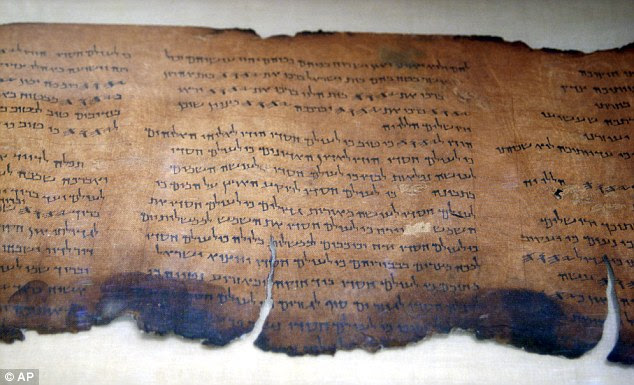 Groundbreaking find: A section of the Dead Sea Scrolls, which were unearthed in 1947
Professor Davies said: ‘The possibility of a Hebrew-Christian origin is certainly suggested by the imagery and, if so, these codices are likely to bring dramatic new light to our understanding of a very significant but so far little understood period of history.’

Mr Elkington, who is leading British efforts to have the books returned to Jordan, said: ‘It is vital that the collection can be recovered intact and secured in the best possible circumstances, both for the benefit of its owners and for a potentially fascinated international audience.’

*British scientists have uncovered up to eight million mummified dogs, thought to have been sacrificed to Anubis, the god of the dead, 2500 years ago after excavating tunnels in the ancient Eygptian city of Saqqara.

People:
Philip Davies
Places:
Israel
Read more: http://www.dailymail.co.uk/sciencetech/article-1371290/70-metal-books-Jordan-cave-change-view-Biblical-history.html#ixzz1ZbFp3QTp The article is reproduced in accordance with Section 107 of title 17 of the Copyright Law of the United States relating to fair-use and is for the purposes of criticism, comment, news reporting, teaching, scholarship, and research.