For 18 months, Republican strategists, political pundits, reporters and Americans who follow them have been pursuing Hillary Clinton’s personal email habits, and no evidence of a crime has been found. But now they at least have the skills and interest to focus on a much larger and deeper email conspiracy, one involving war, lies, a private server run by the Republican Party and contempt of Congress citations—all of it still unsolved and unpunished.

Clinton’s email habits look positively transparent when compared with the subpoena-dodging, email-hiding, private-server-using George W. Bush administration. Between 2003 and 2009, the Bush White House “lost” 22 million emails. This correspondence included millions of emails written during the darkest period in America’s recent history, when the Bush administration was ginning up support for what turned out to be a disastrous war in Iraq with false claims that the country possessed weapons of mass destruction (WMD), and, later, when it was firing U.S. attorneys for political reasons.

Like Clinton, the Bush White House used a private email server—its was owned by the Republican National Committee. And the Bush administration failed to store its emails, as required by law, and then refused to comply with a congressional subpoena seeking some of those emails. “It’s about as amazing a double standard as you can get,” says Eric Boehlert, who works with the pro-Clinton group Media Matters. “If you look at the Bush emails, he was a sitting president, and 95 percent of his chief advisers’ emails were on a private email system set up by the RNC. Imagine if for the last year and a half we had been talking about Hillary Clinton’s emails set up on a private DNC server?”

Most troubling, researchers found a suspicious pattern in the White House email system blackouts, including periods when there were no emails available from the office of Vice President Dick Cheney. “That the vice president’s office, widely characterized as the most powerful vice president in history, should have no archived emails in its accounts for scores of days—especially days when there was discussion of whether to invade Iraq—beggared the imagination,” says Thomas Blanton, director of the Washington-based National Security Archive. The NSA (not to be confused with the National Security Agency, the federal surveillance organization) is a nonprofit devoted to obtaining and declassifying national security documents and is one of the key players in the effort to recover the supposedly lost Bush White House emails. 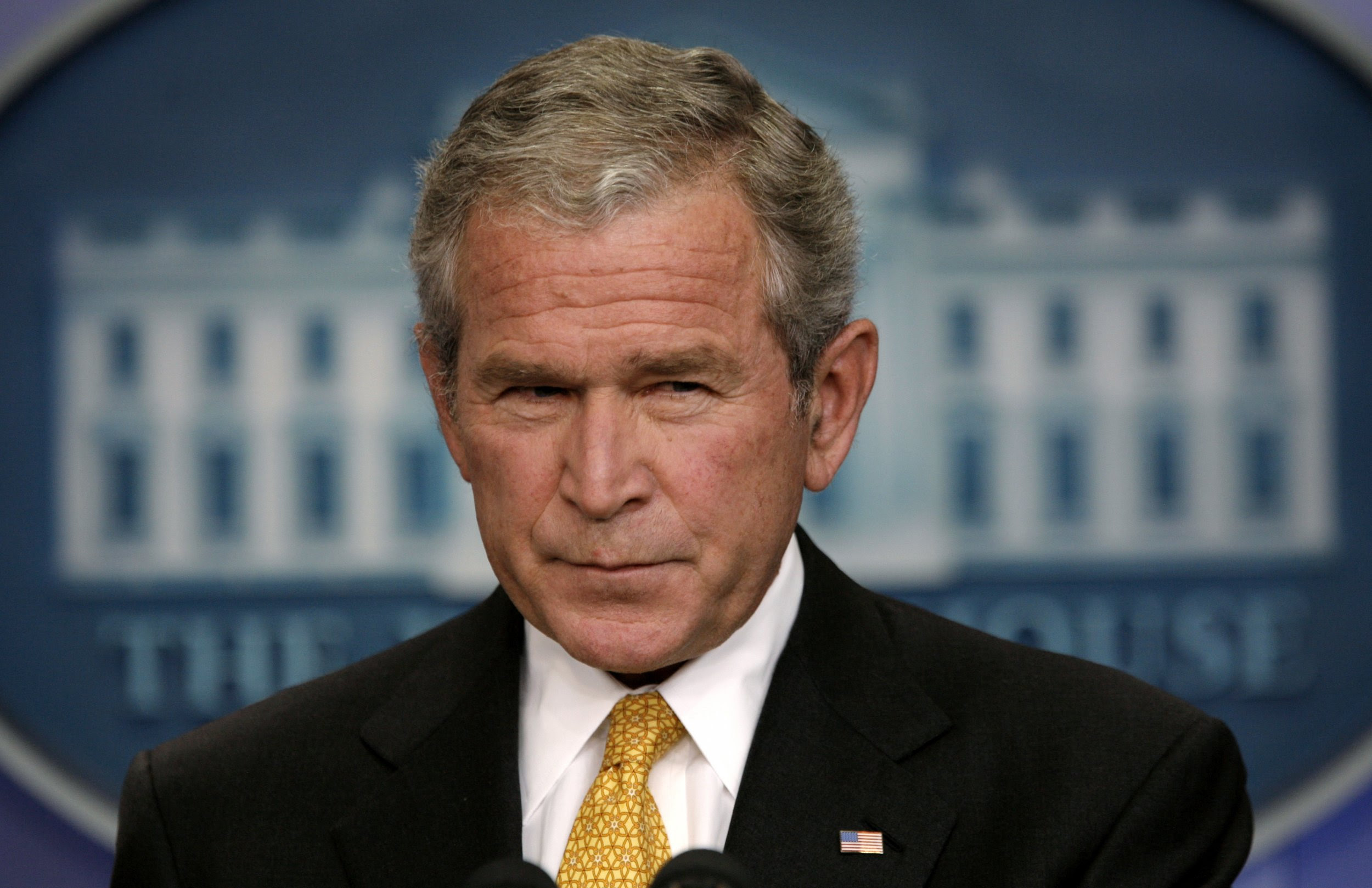 The media paid some attention to the Bush email chicanery but spent considerably less ink and airtime than has been devoted to Clinton’s digital communications in the past 18 months. According to the Boston social media analytics firm Crimson Hexagon, which ran a study for Newsweek, there have been 560,397 articles mentioning Clinton’s emails between March 2015 and September 1, 2016.

In 1978, Congress passed the Presidential Records Act (PRA), which mandated that all presidential and vice presidential records created after January 20, 1981, be preserved and that the public, not the president, owned the records. The following year, the Reagan administration installed the White House’s rudimentary first email system.

Despite the PRA, neither the Reagan nor the George H.W. Bush administration maintained email records, even as the number of White House emails began growing exponentially. (The Bush administration would produce around 200 million.) In 1989, a federal lawsuit to force the White House to comply with the PRA was filed by several groups, including the National Security Archive, which at the time was mostly interested in unearthing the secret history of the Cold War. The suit sparked a last-minute court order, issued in the waning hours of the first Bush presidency, that prevented 6,000 White House email backup tapes from being erased.

When Bill Clinton moved into the White House, his lawyers supported the elder Bush in his effort to uphold a side deal he’d cut with the National Archives and Records Administration to allow him to treat his White House emails as personal. At the time, George Stephanopoulos—then the White House communications director—defended the resistance, saying his boss, like Bush, didn't want subsequent, and potentially unfriendly, administrations rooting around in old emails.

The Clinton White House eventually settled the suit, and White House aide John Podesta—now Hillary Clinton’s campaign chairman—even invited members of the National Security Archive into the White House to demonstrate how the new system worked. If anyone tried to delete an email, a message would pop up on screen indicating that to do so would be in violation of the PRA.

“We were happy with that,” recalls Blanton, who edited a book on the Reagan-Bush email evasion, White House E-Mail: The Top Secret Messages the Reagan/Bush White House Tried to Destroy.

Eight years later, in 2003, a whistleblower told the National Security Archive that the George W. Bush White House was no longer saving its emails. The Archive and another watchdog group, Citizens for Responsibility and Ethics in Washington (which had represented outed CIA agent Valerie Plame in her case against the Bush administration), refiled their original lawsuit.

The plaintiffs soon discovered that Bush aides had simply shut down the Clinton automatic email archive, and they identified the start date of the lost emails as January 1, 2003. The White House claimed it had switched to a new server and in the process was unable to maintain an archive—a claim that many found dubious.

Bush administration emails could have aided a special prosecutor’s investigation into a White House effort to discredit a diplomat who disagreed with the administration’s fabricated Iraq WMD evidence by outing his CIA agent wife, Plame. Special Prosecutor Patrick Fitzgerald, who was brought in to investigate that case, said in 2006 that he believed some potentially relevant emails sent by aides in Cheney's office were in the administration's system but he couldn’t get them.

The supposedly lost emails also prevented Congress from fully investigating, in 2007, the politically motivated firing of nine U.S. attorneys. When the Democrat-led Senate Judiciary Committee subpoenaed related emails, Bush’s attorney general, Alberto Gonzalez, said many were inaccessible or lost on a nongovernmental private server run by the RNC and called gwb43.com. The White House, meanwhile, officially refused to comply with the congressional subpoena.

Senate Judiciary Chairman Patrick Leahy (D-Vt.) called the president’s actions “Nixonian stonewalling” and at one point took to the floor in exasperation and shouted, “They say they have not been preserved. I don't believe that!” His House counterpart, Judiciary Chairman John Conyers (D-Mich.), said Bush's assertion of executive privilege was unprecedented and displayed “an appalling disregard for the right of the people to know what is going on in their government.”

In court in May 2008, administration lawyers contended that the White House had lost three months’ worth of email backups from the initial days of the Iraq War. Bush aides thus evaded a court-ordered deadline to describe the contents of digital backup believed to contain emails deleted in 2003 between March—when the U.S. invaded Iraq—and September. They also refused to give the NSA nonprofit any emails relating to the Iraq War, despite the PRA, blaming a system upgrade that had deleted up to 5 million emails. The plaintiffs eventually contended that the Bush administration knew about the problem in 2005 but did nothing to fix it.

Eventually, the Bush White House admitted it had lost 22 million emails, not 5 million. Then, in December 2009—well into Barack Obama’s administration—the White House said it found 22 million emails, dated between 2003 and 2005, that it claimed had been mislabeled. That cache was given to the National Archives, and it and other plaintiffs agreed, on December 14, 2009, to settle their lawsuit. But the emails have not yet been made available to the public.

The Senate Judiciary Committee was operating on a different track but having no more luck. In a bipartisan vote in 2008, the committee found White House aides Karl Rove and Joshua Bolten in contempt of Congress for refusing to comply with subpoenas in the investigation of the fired U.S. attorneys. The penalties for contempt are fines and possible jail time, but no punishment was ever handed down because a D.C. federal appeals court stayed the Senate’s ruling in October 2008, while the White House appealed. Rove’s lawyer claimed Rove did not “intentionally delete” any emails but was only conducting “the type of routine deletions people make to keep their inboxes orderly,” according to the Associated Press.

By then, Obama was weeks away from winning the election, so the Bush administration basically ran out the clock. And neither the Obama administration nor the Senate committee pursued the matter.

The committee’s final report on the matter was blunt: “[T]his subversion of the justice system has included lying, misleading, stonewalling and ignoring the Congress in our attempts to find out precisely what happened. The reasons given for these firings were contrived as part of a cover-up, and the stonewalling by the White House is part and parcel of that same effort.”

At the time, some journalists and editorialists complained about a lack of transparency on the White House’s part, but The Washington Post, in an editorial, accepted the White House explanation that the emails could have been lost due to flawed IT systems.

The mystery of what was in the missing Bush emails and why they went missing is still years away from being solved—if ever. The National Archives now has 220 million emails from the Bush White House, and there is a long backlog of Freedom of Information Act requests already. But not all of the emails will be available to the public until 2021, when the presidential security restrictions elapse. Even then, with currently available archiving and sorting methods, researchers still have years of work to figure out whether Cheney deleted days’ worth of emails around the time of the WMD propaganda campaign that led to war, Blanton says.

“To your question of what’s in there—we don't know,” he says. “There was not a commitment at the top for saving it all. Now was that resistance motivated by political reasons? Or was it ‘We gotta save money’?”

Like Leahy, Blanton has doubts that the emails were ever truly “lost,” given that every email exists in two places, with the sender and with the recipient. But unlike watchdog group Judicial Watch, which has been relentless about forcing the State Department to publicly release Hillary Clinton’s emails, Blanton and his fellow researchers have decided not to press their fight for the release of the Bush emails.

Blanton says he has no idea whether the Bush email record will be found intact after 2021, when his group will be allowed to do a systematic search and recovery process in the National Archives. “Did they find all of them? We don't know,” he says. “Our hope is that by that time, the government and the National Archives will have much better technology and tools with which to sift and sort that kind of volume.”

Blanton says he’s not expecting that kind of upgrade, though. “Their entire budget is less than the cost of a single Marine One helicopter,” he says. “It’s an underfunded orphan.”

Meanwhile, the episode has been nearly forgotten by almost everyone but the litigants. A source involved with the stymied congressional investigation recalled the period as “an intense time,” but the Obama administration didn’t encourage any follow-up, devoting its political capital to dealing with the crashing economy rather than investigating the murky doings that took place under his predecessor. Since then, no major media outlet has devoted significant—or, really, any—resources to obtaining the emails, or to finding out what was in them, or what, exactly, the Bush administration was hiding (or losing).