*** FUND RAISING STATUS:   We are still working on alternative sources for revenues. We want to thank those that contributed so far.  We need all the help we can get as you can see from their harassment.

Our deficit is at $200, due in 7 days, so if you benefited in any way, from our blog,then please contribute off to the right at the pay pal button.  We thank you deeply for your continued support of our work. God bless and keep you and your family safe and healthy.


Vatic Note:   So, this is how they intend to globalize our military, is through NATO.  Sovereignty lost, but American Tax payers pay for it, while the entire globe gets to enjoy the benefits.  I guess since it worked in the Middle east for Israel, I can see why they have expanded it to include the rest of the globe.  Check this out as well.  And this one too....

So, they intend to use Americans wealth through their tax system,  to finance global expenses, and it all started with the TARP BILL and we said nothing, and thus they are now doing it fully out in the open.  This means corporations will pay NO TAXES, only the middle class, if there is one left, and the working class with nothing left for them or their children to have any kind of a life or future, if there are any children, given the sterilization going on without notice.

We will in effect, be slaves/serfs and have nothing left over to have a life.  Add that to the vaccines to sterilize, then they can depopulate at the same time, with us paying for it.   They are clever little pond scum, aren't they? If we do not wake up pretty doggone soon, even the goyim millionaires will be picked clean of their wealth so then we will have no Jefferson types to lead us in our second revolution.

Remember, they can't do any of this without our cooperation.  Its time to stop cooperating. 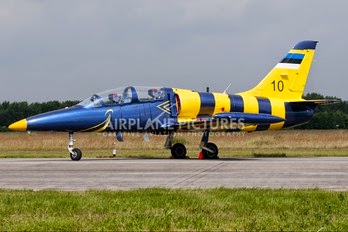 AMARI AIR BASE, Estonia: With grey clouds flooding the skies overhead and poor visibility, Estonian air force joint tactical air controllers, or JTACs, communicated coordinates for airstrikes to U.S. pilots during the first-ever Estonian-led close air support exercise, Nov. 13-14, here. (VN: moving toward a NWO with other nations controlling our military.  Bye bye Sovereignty.  Now we know why they wanted the third world war..... to move into final phase of that agenda.)

This latest round of interoperability training under the umbrella of Operation Atlantic Resolve enabled two 555th Fighter Squadron F-16 Fighting Falcon pilots to execute air-to-ground training with Estonian JTACs. While the JTACs honed their proficiency at calling in simulated precision airstrikes, the pilots leveraged this new milestone in interoperability training to enhance the readiness of NATO combat air forces. (VN: so they could globalize.  Watch and see if they don't change the name of NATO to some global name)

“The U.S. is committed to international security and through this bilateral training with our NATO partners, we are able to counter a range of regional and global threats,” said Maj. Benjamin Couchman, 555th FS pilot and exercise mission commander. “We will continue participating in these joint readiness training events that build partnership capacity and at the same time ensure the security of our allies and partners.”

Although cloud cover restricted visibility between ground and air, according to the Estonian JTACs, the training was highly successful.

“We are training daily to stay proficient with Estonian aircraft, but the capabilities of a U.S. F-16 bring a whole new dimension to our efforts to train like we fight,” said an Estonian air force JTAC. “It’s so important for us to be able to work with U.S. forces and we look forward to additional opportunities in the future.” (VN: see?  What did I say!!!!)


As was the case during recent exercises Platinum Eagle and Ample Strike, this deployment of Aviano’s F-16s to Estonia was in keeping with America’s commitment to ensuring the security of U.S. and NATO allies. While transiting to Estonia, the pilots were also able to train with a KC-135 Stratotanker from the 100th Air Refueling Wing, RAF Mildenhall, England. (VN: reminds me of Bush Sr and the Iraq war when he mentioned the starting of a new World order to fight it. Here we are again, Estonia and Britain, and who knows who else.)

“All of the training we were able to accomplish in these two days strengthened our relationships within NATO, enhanced our interoperability and reassured our European allies of our commitment to peace and stability in the region,” Couchman said. “Because we are ‘forward, ready, now,’ we can support our allies and quickly respond to emerging threats.”