***Fundraising status: We still have a balance on our deficit of $20 which is still needed to meet our obligations, We are so close now, that I feel we will make, but  we have only 2 more days  before our deadline. We want to thank those who got us down to this level.  We are eternally grateful that  the hits are definitely there, and the donations are almost there as well. So please, if you can afford it, donate off to the right of this blog. Thank you to those who came through so far.

I am looking into other ways to raise these funds, but for now it has to be a partnership between us until I can find other ways.   So any help you can give will be greatly appreciated. The pay pal donation button is off to the right of the blog.  Thank you again from the bottom of our hearts.

Vatic Note:   Now this is a prime example of the "Pot" calling the "Kettle" black.  However, I took so much pleasure in Zbig getting some heat for his work, that I just had to post it and it was even better coming from one of these two psychos who have managed to bring the world to the point it is at today.

Sometimes you just have to share a post that brings such joy to warm the cockles of one's heart... lol   This is one of those times.   I hope you will indulge me a bit here...... this is one of the simple pleasures I get, seeing these psychos pounding on each other instead of us,  and these moments don't come often. LOL 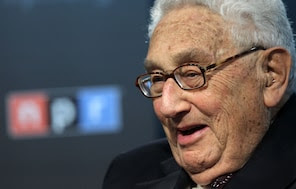 The oft-tedious books, usually perused by policy wonks and history buffs, are released about three decades after the fact, often long after the principals are gone from the scene.   But not always.


A volume published Monday — first flagged by Micah Zenko, the Douglas Dillon fellow at the Council on Foreign Relations (who actually reads these tomes) — includes notes of internal discussions on the energy crisis of 1974-1980.

There’s a March 1976 meeting of top Ford administration officials: Secretary of State Henry A. Kissinger, National Security Adviser Brent Scowcroft and others.
The CIA- installed Shah of Iran was in power, and Ford was running against Ronald Reagan in the GOP primaries and soon to face Jimmy Carter in the general election.

Kissinger, now 89, complains about attacks by Reagan and a prominent Democratic senator and says: “They’ve been going around for weeks attacking American foreign policy and accusing us of weakness. And the first time I hit back, they call it unfair. But I’ve got news for them, I’m going to hit them again in Dallas on March 22.”

Scowcroft, 87, says: “Even Carter hit back. I understand he’s got [Zbigniew] Brzezinski working for him. That won’t help him very much.”

Kissinger:  ”Brzezinski is a total whore. He’s been on every side of every argument. He wrote a book on “Peaceful Engagement” [in 1965] and now that we are doing most of what he said in the book, he charges us with weakness.”

We’ve asked for comment from Kissinger and Brzezinski.
Brzezinski, now 84, e-mailed: “Henry is a friend of mine — he must have meant ‘bore.’”

Nothing yet from Kissinger.

At another meeting, on Dec. 9, 1974, we find Kissinger again displeased. “We have all of these eunuchs from David Rockefeller’s Trilateral Commission running around town saying that we are trying to confront the Arabs. . . . I don’t know whatever possessed me to give those idiots my blessing.”  (VN: looks like a battle between the Fascists (Rockefeller) and the Zionists (Kissinger).  These are long term partners that fight every so often and snipe at each other when displeased with the way something is going.)

Eunuchs? Idiots? We always thought of it as a shadowy, all-powerful, world-controlling organization, bigger even than the Bilderburg Group.