Vatic Note:  We did some blogs on here in the past showing and proving the role Homeland Security AND SPLC AND ADL play in what that sign in this photo below, says about police being "illegally allowed to murder and brutalize minorities in this country," why???  Because those doing this are racists of the highest order.  If you don't believe me just google, "Prince Phillip is a racist" and see what you get.

Remember, Britain is the hub for the New World Order and controls the UN. The royalty are khazars from black nobility families of Germany.  They are doing this to reclaim their status as empire, and are controlled by the Rothschild chatham house through the York Lodge of Britain.  They never do anything for one reason, the khazars also are trying to get a revolution going by splitting or dividing up the country which has not worked pitting right against left, and Muslims against Christians, so they are trying the old tried and true, Whites against blacks or blacks against whites.

Ironically there is NOW an attempt by Israeli dual citizens, neo and libcons  to "USE BLACKS TO BRING DOWN WHITES" as we discussed in the past, and the SPLC and ADL have always promoted racism in this country and used it to garner massive amounts of donations through promoting fear using race as the cornerstone of their drives.  They actually funded the KKK here in this country to stir up the racism and thus increase their donations.

The Israeli khazars were the first to introduce slavery of blacks into America.  They are also the ones that hired the M13 gangs in LA to kill black children who were doing well in school.  Once again, the real racists are trying to control the agenda using race.   The real reason they want this done is the annunaki connection to caucasians and the khazars are dragos.  This war is thousands of years old, and they never win.  Right has might.  We will prevail.

What the SPLC and ADL neglected to tell their donors is THAT they are satanists that rape children as the court case showed in the case of Dees divorce where his wife accused him of pedophiling his own children.  Its part of their satanic pagan religion of penis worshipping.  That is how we knew that it was the khazars that killed Gaddafi and the ambassador, it was the sodomy.

Remember black nobility are the intermarriage of the khazars and royalty of eastern europe.  And how we know they control our gov is they just got Sodomy legal in  the military under the NDAA act.  Notice how no one knew that?  That is the real reason no one was allowed to read it before voting on it. 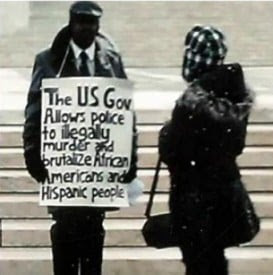 A federal judge has blasted the Supreme Court’s plaza policy, which forbids people from being in “assemblages” or carrying signs that are intended to attract attention, declaring such limits in the shadow of the building where the First Amendment is supposed to be protected unconstitutional.

With hours, the Supremes bashed back, installing a new set of restrictive “regulations” specifying what can and cannot happen on the high court property including the plaza.

It was Judge Beryl Howell who wrote in an opinion this week that such limits – outlined in federal law and based on the “dignity” of the location – are unconstitutional and unenforceable.

“The absolute prohibition of expressive activity in the statute is unreasonable, substantially overbroad, and irreconcilable with the First Amendment,” the judge wrote. “The court therefore must find the statute unconstitutional and void as applied to the Supreme Court plaza.”

Constitutional attorney John Whitehead, president of the Rutherford Institute, said Howell’s “frank, no-holds-barred ruling affirming the Supreme Court plaza as a free speech zone throws a lifeline to the First Amendment at a time when government officials are doing their best to censor, silence and restrict free speech activities.”

Whitehead, author of “A Government of Wolves: The Emerging American Police State,” said there are “many things that are repugnant to the Constitution right now – mass surveillance of Americans, roadside strip searches, forcible DNA extractions, SWAT team raids, civil commitments for criticizing the government, etc. – but this ruling at least sends a message all is not lost as long as we still have some members of the judiciary who understand and abide by both the letter and the spirit of the rule of law, our U.S. Constitution.”

However, the high court posted online an announcement that it now is imposing a regulation that bans activities on the court’s grounds or building such as picketing, speech-making, marching, vigils or religious services “that involve the communication or expression of views or grievances, engaged in by one or more persons, the conduct of which is reasonably likely to draw a crowd or onlookers.”

Whitehead said the new maneuver to restrict constitutional rights is being researched.

The original case developed over the Jan. 28, 2011, appearance on the plaza by Harold Hodge. He stood quietly and peacefully in the plaza area wearing a small sign that proclaimed: “The U.S. gov. allows police to illegally murder and brutalize African Americans and Hispanic people.”

The Rutherford report said the plaza is a place where the public is allowed to gather and converse and is, in all relevant respects, like a public square or park where citizens have traditionally met to express their views on matters of public interest.

But police immediately approached Hodge and told him he was breaking the law. When Hodge refused to leave, he was arrested, taken to police headquarters and cited.

Later, the charge was dropped because Hodge fulfilled an agreement to stay away from the building for six months. But he later filed the challenge to the constitutionality of the special protection for the justices on the Supreme Court.

Rutherford Institute attorneys argued that absolute prohibition on speech and expression on the Supreme Court plaza is unreasonable and unnecessary to protect any legitimate governmental interest with respect to the court or its proceedings.

See a video report on the case:

Rutherford noted that the message of Hodge’s sign was correct, citing statistics that show black males are more than one-third of prisoners in state and federal lockups, even though they make up only 10 percent of the population. And beyond that, Hodge “has a right to be out there,” he said.

Whitehead said the whole idea of a zone without free speech violates the constitutional concept of being able to “petition our leaders.” The court opinion says that the concept of limiting freedoms through a law advocating for the “dignity” of the courthouse was “repugnant.”

The judge said the limit at the Supreme Court was based on a similar earlier law that was used to protect the U.S. Capitol.  However, that law already was declared unconstitutional.

“Given that the challenged statute was rooted directly in the Capitol Grounds statute, which was ruled unconstitutional, and is clearly relevant here, the court takes judicial notice of this history.”

The opinion noted that attorneys are allowed to hold news conferences there, and court officials have approved commercial filming projects on site.
The judge said a decision on whether the location is a public forum or not wasn’t needed.

“Even if the court were to conclude that the plaza is a nonpublic forum, the absolute ban on speech set forth in [the federal law] is not reasonable and, thus, the court concludes that the ‘justifications for restricting … speech’ on the Supreme Court plaza simply do not ‘satisfy the requisite standard.”


Read more at http://www.wnd.com/2013/06/judge-blasts-speech-limits-at-supreme-court-building/#wmsmf4dFT0Gj9llz.99
The article is reproduced in accordance with Section 107 of title 17 of the Copyright Law of the United States relating to fair-use and is for the purposes of criticism, comment, news reporting, teaching, scholarship, and research.
Posted by Vatic Master at 1:00 AM