While reports of Tuesday’s shooting at the Clackamas Town Center Mall in Oregon, dominated the national media, until Friday’s horrific shooting at Sandy Hook Elementary School in Connecticut, one very important detail has been repeatedly (and intentionally) left out of the MSM’s coverage. 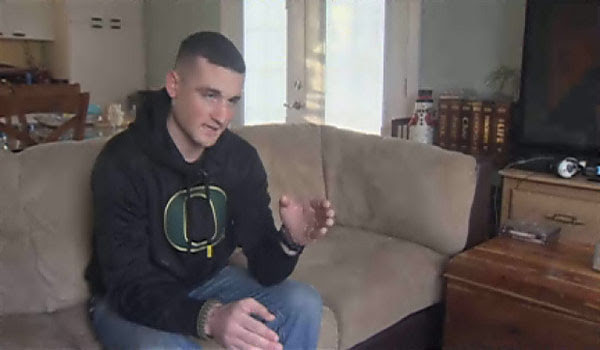 The shooter, Jacob Tyler Roberts, was confronted with an armed citizen, at which time he ran away and shot himself. By the time police arrived on the scene, Roberts was already dead.
That armed man was 22-year-old Nick Meli, who was at the mall shopping with a young woman who was babysitting her friend’s baby.

On Friday, KGW News Channel 8, the only media outlet to cover this part of the story, posted the following report on their website:


“I heard three shots and turned and looked at Casey and said, ‘are you serious?,’” he said.

The friend and baby hit the floor. Meli, who has a concealed carry permit, positioned himself behind a pillar.

“He was working on his rifle,” said Meli. “He kept pulling the charging handle and hitting the side.”

The break in gunfire allowed Meli to pull out his own gun, but he never took his eyes off the shooter.

“As I was going down to pull, I saw someone in the back of the Charlotte move, and I knew if I fired and missed, I could hit them,” he said.

Meli took cover inside a nearby store. He never pulled the trigger. He stands by that decision.

“I’m not beating myself up cause I didn’t shoot him,” said Meli. “I know after he saw me, I think the last shot he fired was the one he used on himself.”

The gunman was dead, but not before taking two innocent lives with him and taking the innocence of everyone else.

We now know that the assailant’s gun had jammed, and when he cleared it, he quickly retreated and shot himself, as Meli continued to keep him in his sights.

Not only has the national media refused to acknowledge this aspect of the deadly event, but law enforcement has as well.

Sheriff Roberts said: “I’m really proud of all the different agencies that came together to really step up and put their lives on the line,” to “basically hunt down this guy in the mall.”

Now, remember, the shooter was already dead when police arrived on the scene.

Killed in the attack were Steven Mathew Forsyth, 45, and Cindy Ann Yuille, 54, A 15-year-old girl, identified as Kristina Shevchenko, was seriously wounded but was expected to survive.

Of course, the Obamamedia is in full support of even harsher gun control laws and it should come as no surprise that they would suppress any story which provides proof that lawfully armed citizens do prevent crimes and save lives.

Here are a few facts about armed Americans:

-In 1982, the town of Kennesaw, Georgia, passed an ordinance which required all heads of household to have at least one gun in the house. The burglary rate immediately dropped an astounding 89 percent. Ten years after the law was passed, the burglary rate was still 72 percent less than it was in 1981.

-Armed citizens shoot and kill at least twice as many criminals as the police do every year in this country (1,527 to 606).

-A 1996 University of Chicago study concluded that states which passed concealed carry laws reduced their murder rates by 8.5 percent, rapes by 5 percent, aggravated assaults by 7 percent, and robbery by 3 percent.

-According to the National Safety Council, with guns being used 2.5 million times a year in self defense against criminals, firearms are actually used more than 80 times more often to protect lives, rather than to take lives.

-Another Justice Department study found that 57 percent of felons agreed that “criminals are more worried about meeting an armed victim than they are about running into the police.”

The article is reproduced in accordance with Section 107 of title 17 of the Copyright Law of the United States relating to fair-use and is for the purposes of criticism, comment, news reporting, teaching, scholarship, and research.
Posted by M. C. Bruecke at 1:30 AM