Vatic Note: Since when is it US Policy to torture everyone in a prison? Seymour Hersh was so affected by an audio of children screaming from being sodomized by our soldiers that he could not write about it for a long time. This is NOT the United States of America.  In the past if it happened, it was an individual who was not suited for that type of work and would have to be fired.... but progressively, after the assassination of  JFK by the zionist bankers, we have slowly deteriorated down to the animals we have allowed to infest our government. This kind of barbaric and uncivilized behavior in the United STates started with the infiltration of our government in key positions by these khazars.

As just mentioned, this is Israel and that is proven by the blogs we put up about their torturing little Palestinian children. WE also published on this blog, the fact that both the Bush administration, and Obama have and had, dual Israeli zionist citizens occupying key positions within the government that make these decisions. Almost no one denies anymore that Bush and Obama were handled by these khazar animals. Its their signature way of dealing with children. They have absolutely no humanity.

Remember, add to this the fact that they are all related like Bush and Cheney and Obama, and Rumsfeld.  Then add to that,  Mrs. George HW Bush admitted that her husband was a Khazar as is the Queen that he is admittedly related to. Its why God has forsaken our nation just like he did the German people when they allowed the same thing to happen in their country, that was ironically a Constitutional Republic before the Zionists overthrew that government through a false flag.

History does repeat itself and we need to wake up and take a very hard look at ourselves as a people, and revisit what we believe in and who we are, if we are ever going to come out of this mess in one piece. If we do not, you can be certain we will suffer the fate of the German people after WW II, when they lost. They were bombed for a solid week into oblivion and a quarter million unarmed civilians died in one week from that bombing in Dresden.

Then the russians killed outright another 3 million Germans who were also unarmed.  So, ask yourselves, who  ran Russia?  Same people.  Same barbaric and uncivilized way of dealing with humanity, until they over threw the yoke of these creatures who are not human  and who take that fact as a compliment.  Please read this and take stock of who we are, what we want to be and how we intend to stop all this.  Iceland sound familiar? Believe it or not, its up to us, on our own, without help from anyone, to stop all this, by citizens arrests, citizens empaneled Grand Juries, and then forcing prosecutors to do their jobs.   Or maybe thermite thrown down 70 story underground tunnels Dulce.  I don't know.... anyone have any good suggestions besides these?  Nothing else has worked. 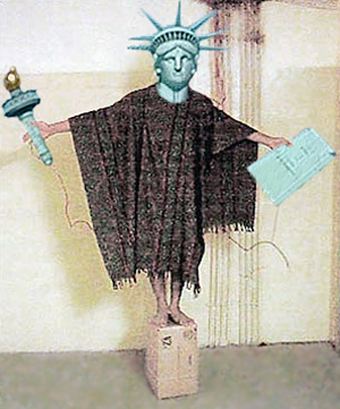 A previous article titled Good News and Bad said when something good surfaces, reporting it should follow. There's so precious little around.

Two lawsuits against private military contractors (PMCs) offer encouragement. Both were brought under the Alien Tort Statute (ATS). The Center for Constitutional Rights (CCR) filed them on behalf of tortured and abused plaintiffs.

They were held at Iraq's notorious Abu Ghraib prison. (VN: this should read "Foreign occupied America") America mistreats everyone held there. It's official policy in all US torture prisons.

It was brought on behalf of 72 Iraqi plaintiffs. They charged torture, war crimes, and other forms of abuse. On July 29, 2010, Judge Peter Messittee denied Defendants' motions to dismiss.

On September 21, 2011, a Fourth Circuit Court of Appeals three-member panel reversed the district court and dismissed the case.

On October 5, 2011, plaintiffs petitioned for rehearing en banc (the full court). On November 8, the Fourth Circuit granted a rehearing.

On November 23, L-3 filed its brief. On December 10, plaintiffs filed their own. On December 19 and 20, amicus briefs supported them.

On January 27, 2012, oral arguments were heard. On May 11, the Court dismissed L-3's appeal. It remanded the case to the district court for rehearing. On October 10, a confidential settlement was reached.

Although terms aren't known, plaintiffs won a significant victory. L-3 Services and Nakhla "directed and participated in torture and other illegal conduct." They did so at Abu Ghraib and other Iraq prisons.

Other counts included "civil conspiracy," as well as aiding and abetting it. Plaintiffs sought compensatory and punitive damages. Acts they were subjected to included:

"rape and threats of rape and other forms of sexual assault; electric shocks; repeated beatings, including beatings with chains, boots and other objects; prolonged hanging from limbs; forced nudity; hooding; isolated detention; being urinated on and otherwise humiliated; and being prevented from praying and otherwise abiding by their religious practices."

Plaintiff Wissam Abdullateef Sa'eed Al-Quraishi was hung on a pole for seven days. He was also subjected to beatings, forced nudity, electric shocks, humiliating treatment, mock executions, and other forms of torture and abuse.

For over 10 months, plaintiff Mr. Al-Janabi was tortured and abused repeatedly. Treatment included "having his eyes almost clawed out, being stripped naked and threatened with rape, being hung upside down until he lost consciousness, and being deprived of sleep for extended periods of time."

He and other plaintiffs were released uncharged.

On March 18, 2009, CACI's motion to dismiss in part was denied. On September 21, a Fourth Circuit Court of Appeals three-judge panel reversed the district court and dismissed the case.

On May 11, 2012, the Fourth Circuit ruled for plaintiffs. They remanded their case to the district court for rehearing. On October 11, plaintiffs petitioned to reinstate Alien Tort Statute claims. On November 1, their motion was heard.

L-3 Services and Dugan no longer are defendants. Charges claim CACI "directed and participated in illegal conduct, including torture, at" Abu Ghraib.

Other counts included "civil conspiracy," as well as aiding and abetting it. Plaintiffs seek compensatory and punitive damages. They were subjected to:

Plaintiffs are innocent Iraqi civilians. They were released uncharged. They still suffer from physical injuries and mental trauma. They demand redress.

Suhail Najim Abdullah Al Shimari was detained from 2003 until 2008. He endured electric shocks, food deprivation, threats by dogs, and nudity while "forced to engage in physical activities to the point of exhaustion."

Taha Yaseen Arraq Rashid was detained from 2003 until 2005. He was tortured, humiliated, deprived of oxygen, food, and water, tasered in the head, and severely beaten.

Broken limbs and vision loss resulted. Cuffed and shackled to cell bars, he was forcibly subjected to sexual acts by a female. He was also forced to witness a female prisoner's rape.

Sa'ad Hamza Hantoosh Al-Zuba'e was imprisoned from 2003 - 2004. He endured extremely hot and cold water, beating his genitals with a stick, and detaining him in a solitary cell under conditions of sensory deprivation for almost a full year.

Salah Hasan Nusaif Jasim Al-Ejaili was detained for about four months. He was stripped, kept naked, threatened with dogs, deprived of food, beaten, and kept him isolated under sensory deprivation conditions.

Those performing security functions are hired gun paramilitaries. They're unprincipled for a buck. Most often, they're unaccountable under international and domestic laws. They're licensed to torture, abuse, and kill with impunity. Exceptions prove the rule.

They operate in dozens of countries. Nearly always, torture, abuse of all kinds, rape, human trafficking, and other crimes go unpunished.

Companies like Blackwater (now Academi), DynCorp, CACI, L-3 Services, and others don't show up with olive branches. They come to rape, torture, abuse and kill with impunity and be well-paid for it.

Since the 1990s, hundreds of billions of dollars have been spent outsourcing services military personnel used to perform at far lower cost.

Spending is out-of-control. Waste, fraud, and anything goes malfeasance is commonplace. Profiteering results in vast amounts of money thrown away. Black budgets conceal how much. Minimally, it's in the tens of billions of dollars annually.

Favored companies get no-bid contracts. Oversight is virtually nonexistent. Instead of stopping bad practices, they proliferate. Media scoundrels suppress the worst of what goes on. A culture of impunity combines profiteering with out-of-control criminality.

CCR's work provides a tiny ray of hope. It's mostly lost in an ocean of malfeasance of the worst kinds.

Stephen Lendman lives in Chicago and can be reached at lendmanstephen@sbcglobal.net.