Vatic Note:  Well, it looks like all the "real" players working for the illuminati and the global elite are being pressed into service to sell the NWO THROUGH THE OWS movement.  The good news is we can finally identify who they are for sure now.   When you view what they have done here, then you know they are doing this in every country and the agenda is the same, a NWO run by the SAME BANKERS AND CORPORATIONS THAT HAVE RAPED AND PILLAGED OUR COUNTRY and turned it into a third world nation soon.   They are then trying to sell it as the HEGELIAN "SOLUTION" TO THE "PROBLEMS" THEY CREATED and they are even controlling the "REACTION" by these OWS groups world wide.   Very Hegelian indeed as they promised in the protocols.  We knew much about Soros before this article, but this article gives  proof of the involvement of the new world order team in this movement.   We must not forget history.  These are the same players that brought down Russia in 1917, Germany in 1934, and subsequent other eastern European countries through deception, false fronts, false flags etc.... we have seen HISTORICALLY, THE RESULTS OF THEIR SUCCESS IN THOSE COUNTRIES.  So the question becomes,  "IS THAT WHAT WE WANT HERE?" The poverty, the loss of land ownership, the long lines waiting for toilet paper to be distributed, the lack of food, the serfdom served on the cooperative owned farms, so much and so little return to the people of those harsh conditions.   They have gotten away with this for centuries and we are posting a blog tomorrow that covers this early ancient history of these acts and secret agreements and who the players are and how they are connected.  Then this below will make so much more sense.  Its the best ancient history of these people called the Black Nobility and Khazars that I have published so far, so tune in tomorrow and keep this article handy to see how they plan these things from centuries ago.  Almost everything is in here that we need to understand who we are up against and what we must do and violence is not one of the options, unless and until they make their first ILLEGAL MOVE against us.  Then we are legal to respond appropriately.  I wish to express my deep gratitude to Powerpoint Paradise for publishing all of this proof that took a great deal of effort to put together for our benefit.


I know it sounds crazy, but what i found out about this movement it’s just unbelievable. I will try to make this short. On the 15th October 2011 begun the worldwide action. For the first time in history, upwards of 15 million people in sixty countries marched together for a “global change”. Their official website is: http://15october.net/
Someone decided to find out who owns that domain name by visiting this site: http://who.godaddy.com/ (This is a database with a searchable list of every single domain currently registered in the world). As you can see from the printscreen i took, before the 18th October the registrant was
“Paulina Arcos
866 United Nations Plaza
Suite 516
New York, New York 10017
United States” 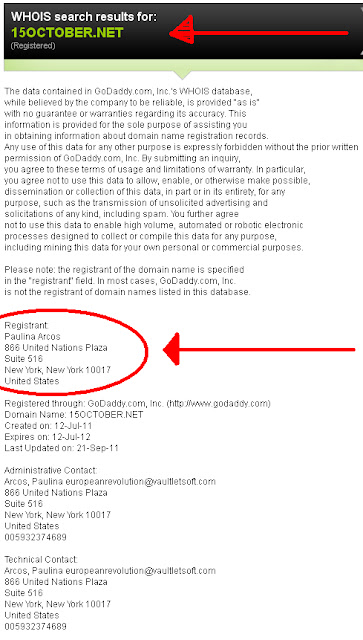 Well… Who the hell is she? I googled her name and i couldn’t find many infos, but i found out that she is Francisco Carrion Mena (permanent representative of Ecuador, chairman of the special committee at the UN) ‘s wife. Okay. I thought i had no more things to discover. The UN were behind this movement, that’s it.

Well, i was wrong… While reading a book (“Freemasonry and Secret Societies” by Epiphanius, edition “Controcorrente” April 2008, page 620 ), i found out that the unofficial Lucis Trust’s address is: 866 United Nations Plaza New York, and this information appears just on two books: the one i was reading, and on “Die Netzwerke der Insider” by Peter Blackwood.

Wait a minute…. This must be a joke. …but here it comes the unbelievable part: On the 19th October, the WHOIS Information is been changed!!! In fact the registrant now is:

…as you can check here: http://who.godaddy.com/whois.aspx?domain=15october.net&prog_id=GoDadd

New infos about this “global movement”: Let’s see WHO supports them…

George Soros expressed sympathy with OWS (Occupy Wall Street).  Let’s read something about him: George Soros is a member of the CFR (Council on Foreign Relations), the Trilateral Commission (a super-elite cabal of 300 international power brokers who practically rule the world), the Bilderberg Group and he is founder and chairman of the Open Society Foundations. He is known as “the Man Who Broke the Bank of England” because of his US$1 billion in investment profits earned in a single day (16th Sept 1992).

Mikhail Gorbachev says “Occupy Wall Street” signals an emerging New World Order.
Don’t forgeto who is Gorbachev: a premier world Leader and boasts members at the highest levels of the United Nations bureaucracy, a member of the Lucis Trust (as reported by the EIR, Executive Intelligence Review di Washington).

Here’s what Gorbachev said during on October 20th at Lafayette College. Exactly! The same address of the Lucis Trust…

“We are reaping the consequences of a strategy that is not conducive to cooperation and partnership, to living in a new global situation. The world needs goals that will bring people together. Some people in the United States were pushing the idea of creating a global American empire, and that was a mistake from the start. Other people in America are now giving thought to the future of their country. The big banks, the big corporations, are still paying the same big bonuses to their bosses. Was there ever a crisis for them? . . . I believe America needs its own perestroika. The entire world situation did not develop properly. We saw deterioration where there should have been positive movement.

My friend the late Pope John Paul II said it best. He said, ‘We need a new world order, one that is more stable, more humane, and more just.’ Others, including myself, have spoken about a new world order, but we are still facing the problem of building such a world order…problems of the environment, of backwardness and poverty, food shortages…all because we do not have a system of global governance. We cannot leave things as they were before, when we are seeing that these protests are moving to even new countries, that almost all countries are now witnessing such protests, that the people want change. As we are addressing these challenges, these problems raised by these protest movements, we will gradually find our way towards a new world order.”

Even economists support protesters (LOL). An anti-banks protest supported by big economists? Let’s report some of them:

Mario Draghi: an Italian banker and economist who has been governor of the Bank of Italy since 16 January 2006. He has been designated to succeed Jean-Claude Trichet as President of the European Central Bank by November 2011.

Paul Robin Krugman: an American economist, professor of Economics and International Affairs at the Woodrow Wilson School of Public and International Affairs at Princeton University, Centenary Professor at the London School of Economics, and an op-ed columnist for The New York Times. In 2008, Krugman won the Nobel Memorial Prize in Economic Sciences for his contributions to New Trade Theory and New Economic Geography.

Jeff Madrick: a journalist, economic policy consultant and analyst. He is director of policy research at the Schwartz Center for Economic Policy Analysis, The New School. He was formerly finance editor of Business Week Magazine and an NBC News reporter and commentator.

Joseph Eugene Stiglitz: an American economist and a professor at Columbia University. He is a recipient of the Nobel Memorial Prize in Economic Sciences (2001) and the John Bates Clark Medal (1979). He is also the former Senior Vice President and Chief Economist of the World Bank. He is known for his critical view of the management of globalization, free-market economists (whom he calls “free market fundamentalists”) and some international institutions like the International Monetary Fund and the World Bank. He is one of the most frequently cited economists in the world.

One more thing: the participants’ slogan is “We are the 99%” (referred to the difference in wealth between the top 1% and the other citizens of the United States). Isn’t it ironic that they have “rich supporters”? I list two more “supporters”:

Russell Simmons: an American business magnate as the co-founder, with Rick Rubin, of the pioneering hip-hop label Def Jam, and creator of the clothing fashion lines Phat Farm, Argyleculture, and American Classics. He is the third richest figure in hip-hop, having a net-worth estimate of $340 million as of April 2011.

Jimmy Wales: a co-founder and promoter of the online non-profit encyclopedia Wikipedia and the Wikia company. He is a member of the Berkman Center for Internet & Society at Harvard Law School and the advisory board of the MIT Center for Collective Intelligence, the Board of Directors at Creative Commons, Socialtext, and Hunch.com, and former co-chair of the World Economic Forum on the Middle East 2008. (VN:  We published a blog on the MIT connection to the Tavistock Group of Britain that does research into mind control and mass psychology, so that connection says a lot about Wikipedia, we also know the khazars are heavy into Harvard and that is how Obama's Harvard history came about with no evidence of his attending or being publisher of the Harvard paper as they claimed)

By the World Economic Forum he is one of the “Young Global Leaders” of 2007.
Occupy Wall Street is now on wikipedia (what a coincidence).  (VN:  Remember, Israel has a team of editors who edit and control the info on Wikipedia, we published a blog on that fact.)

Well… do you need more evidence?

Jim Stone visits Occupy LA
... He has wonderful photos, with detailed captions,
pointing out infiltrators...
---- he says, the occupy people have not produced
anything worthwhile for almost 2 weeks – can we say controlled. heh

“I believe these people are on scene to hack into the laptops of bona fide protestors, to help intelligence agencies develop dossiers. I was specifically told that there were a total of 3 on site by the guy who tried to get me to make anti-semitic slurs.”

Anonymous, just to let you know, we have address Jim Stones offering as Part III and of course, given him full credit. Thanks again and its getting around already.