Vatic Note: Again, this is in keeping with our People to People mission of bringing all of us together and learning and see what other countries are going through and what tactics they are using to combat the global enemy of all of us. Nothing has brought us together better than the international Khazar Zionist Bakers as an enemy of each and everyone of us everywhere. I am sorry to say our leadership in this country has been completely taken over by them, so unfortunately we have to deal with them right here in our nation and pray that its not to late to stop all this. But look what the Hungarian Press did that was wonderful. Oh, if only we had such press. Well, we do, the alternative press and I don't think I will ever go back and trust them ever again. Enjoy the read and lets hope we can get some ideas from this.

Hungarian Media Puts Up Blank Pages to Protest Censorship Bill
http://www.techdirt.com/articles/20110112/10363712639/hungarian-media-puts-up-blank-pages-to-protest-censorship-bill.shtml
From the "Good for them" dept, Tech Dirt on line

We noted that some media publications in Hungary were considering a "media blackout" to protest new laws that would greatly increase government control over the media, by forcing the media to reveal sources and threatening fines if the government felt that coverage wasn't "balanced." While we doubted that such a protest would have much of an impact, it does appear that many of the major media properties put up blank pages on their websites to protest the law. And now we'll see whether or not it has any impact at all... Here is some background on the subject...........

We had already discussed how Hungary's new media censorship laws seemed particularly draconian -- requiring all reporting to be sufficiently "balanced" or the media may receive a fine and all media must reveal their sources. It appears the new law is getting a lot more attention, as its coincides with Hungary taking over the Presidency of the EU. Civil liberties groups are protesting the new law and calling for a media blackout. I'd be surprised if any such blackout is effective but having more people speak out in general about such laws hopefully will lead the Hungarian government to reconsider its policies. Here is how they are going to handle it........ 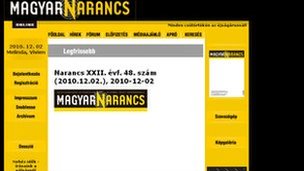 Several Hungarian newspapers have published blank front pages or cartoons in protest at a bill which they say would restrict media freedom.

The legislation now being debated in parliament would allow the official media watchdog to impose heavy fines on privately run publications.

There would be sanctions for unbalanced coverage or breaches of rules on coverage of sex, violence or alcohol.

The government says the law will bring about a more balanced media.

The online edition of the paper ran a blank page on Thursday.

Zoltan Kovacs, editor-in-chief of the political and literary weekly ES, said the bill was clearly aimed "against journalists, against transparency and against the profession as a whole".

Under the new legislation, Hungarian media outlets will have to fill at least half of their programming with European productions, rather than those from overseas, while radio stations will have to dedicate at least 25% of airtime to Hungarian music.

One proposal in the bill is to allow the Media Council - whose current members are all government nominees - to issue fines which can only be appealed against after they have been paid.

Fines which could total the equivalent of tens of thousands of dollars could make it all but impossible for some publications to remain in business.

The aim is to "guarantee the freedom of members of the [media] branch, while protecting the interests of the community", said parliamentary deputy Erzsebet Menczer, one of the authors of the bill.

Gabor Gavra, editor of the online news site hirszerzo.hu which is joining the protest, said the bill was too vague.

"We don't know what the exact rules will be, but even the possibility that we will be at the mercy of the whims of the council is distressing," he added.

Parliament began debating the bill on Wednesday and is expected to approve it on 13 December.

It is supported overwhelmingly by the centre-right government parties.

It has also amended the constitution to fit its own legislative plans and has made it possible to name several officials, including the head of the new media authority and the chief prosecutor, to unusually long, nine-year terms.

The same thing is happening in the U.S., proposals pushed by the LEFT, and called the fairness doctrine, along with fine. Though I don't think they are pushing for revealing sources.

"Fair and Balanced" is a sure way to get people BLATHERING into INFINITY, while the PTB do other things to shore up their Power and pick the people's pockets, sheeple minds are on listening to blather.

Some did say long ago these 'wars' etc. would be fought in virtual reality. Keep 'em YAPPING back and forth forever, with nothing getting done except more laws being passed here, there, and everywhere, along with fines.

Hungary is a small country. They should go for a media blackout. Let the people experience FIRST HAND what's going on, and let them ask questions. Maybe they will get an ear-full and wake up. Raise the stakes and don't back down, that's what I say. Even if things get ugly. The point is that the PEOPLE SHOULD BE ABLE TO FOLLOW THESE EVENTS WITH THEIR OWN EYES, and maybe it will help wake them up to issues like the freedom of the press vs. government control of the press. So, which do they want, the Hungarian sheeples? Let them see it play out IN THEIR FACES.

"Fair and Balanced" is nothing more than a BLIND, and the PTB love this sort of thing.

The not-goverenment, but LEFTIST proposal of a fairness doctrine was a segment last week on CSPAN's Washington Journal, with viewer call-ins. I think the call-ins were mostly confused. What does this doctrine imply? On a radio program like, for instance, the Michael Savage program, would he be FORCED to have on his show a left-winger? Savage would have him for a snack, to be sure, but this is not what people tune in to hear.

Or would those nitwits over at the Faux News channel with that Steve Dorsey idiot and the made-up Barbie dolls be out of their league and FORCED to try to have intellectual discussions with, say, an actual intellectual like the so-called Marxist professor Noam Chomsky (even though probably marxist)?

I can accept certain good things from the Left and from the Right, but in this case I would like to b*tch-slap the Left for pushing this idea and bringing the government into it by passing laws to ensure it it happens and to fine those that won't comply.

I meant Steve Doocy (a real nitwit), not "Dorcy"