Vatic Note: This blog is basically in two parts, the first is about Bill Cooper and his prediction of 9-11 in June 2001, and how he was killed shortly after 9-11 when he reiterated and reminded people "WHY" he was able to predict this event. They killed him before he could do them anymore damage. The second part at the end is about Obama and his cooperation in satanic worship in this government and using his platform to subliminally pass that on. You have to watch all this and decide for yourself, but remember, John Todd, (ex illuminati member in charge of the music industry for the illums) told us about this in a piece we did on the blog. Revisit that if you want to get confirmation of what we have here. 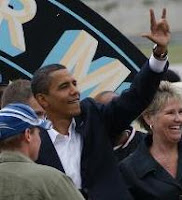 We have done quit a bit, those of you have followed our blog from the beginning, about satanism and its role in what we are going through globally right now. WE also proved it was at the highest levels of government in many countries including the US and Britian for two. We will be putting up who all those leaders are later but for now here is a picture of Obama with the satanic hand signal which is the goat god called called Bophamet." 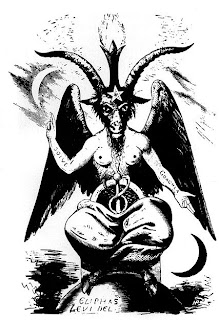 "Baphomet", or the "Sabbatic Goat". This is the androgynous figure of Satan, in all his great evil. This symbol has been used for centuries to represent Satan." This is also a symbol for the owl god Molech as well, the horned owl with the beak, the difference is only in the level of sacifice required for the powers sought. That is the one used by some factions of the illuminati at the Bohemian grove each year, while Baphomet is used by other factions. At the end of this presentation is a video showing the satanic elements used in speech and music based on Alister Crowleys book on majik. Black magic that is. Also note the 25 elements in the illuminati agenda listed below, match almost perfectly with minor adjustments to the protocols. Remember Rothschild was instrumental in creating the 13 families and we have a video on our blog that shows that historical happening and how and when it occurred.

This is a short yet important video presenting Bill Cooper’s 9/11 prediction, rare 9/11 footage and audio from his book “Behold a Pale Horse” and the Illuminati agenda. Bill Cooper was one of the top conspiracy researchers, he was active on exposing the Illuminati (secret government) and most importantly the satanic agenda which is tied in with the UFO hoax.  (watch this video below)

Here is also a list of the 25 Illuminati principles/goals that Adam Weishaupt set up after the Rothschilds started financing the Illuminati conspiracy.

The following 25 goals apply to America and the rest of the world, this is pretty much a step by step manual on how the Illuminati conspiracy works, basically explains all the long term plans they had back at the Illuminati’s founding in 1776.

The 25 Illuminati goals:  (matches almost perfectly the protocols and Rothschild involved in both so its no surprise his 13 illum families adopted this since the families were all zionists)

1. All men are more easily inclined towards evil than good.

3. Use the idea of freedom to bring about class wars

4. Any and all means should be used to reach the Illuminati Goals as they are justified.

6. The power of our resources must remain invisible until the very moment it has gained the strength that no cunning or force can undermine it.

7. Avocation of mob psychology  to control the masses.

8. Use alcohol, drugs, corruption and all forms of vice to systematically corrupt the youth of the nation.

9. Seize property by any means

10. Use of slogans such as equity, liberty, fraternity delivered into the mouths of the masses in psychological warfare

11. War should be directed so that the nations on both sides are placed further in debt and peace conferences conducted so that neither combatant obtains territory rights.

12. Members must use their wealth to have candidates chosen and placed in public office who will be obedient to their demands and will be used as pawns in the game by those behind the scenes. Their advisors will have been reared and trained from childhood to rule the affairs of the world.

14. Agents will come forward after fermenting traumatic situations and appear to be the saviors of the masses.

15. Create industrial depression and financial panic, unemployment, hunger, shortage of food and use this to control the masses or mob and then use the mob to wipe out all those who stand in the way.

16. Infiltrate into the secret Freemasons to use them for Illuminati purposes.

17. Expound the value of systematic deception, use high sounding slogans and phrases and advocate lavish promises to the masses even though they cannot be kept.

18. Detail plans for resolutions, discuss the art of street fighting which is necessary to bring the population into speedy subjection.

19. Use agents as advisors behind the scenes after wars and use secret diplomacy to gain control.

21. Use high taxes and unfair competition to bring about economic ruin by control of raw materials. Organize agitation among the workers and subsidize their competitors.

22. Build up armaments with Police forces and Soldiers sufficient to protect our needs.

23. Members and leaders of the one world government would be appointed by the directors.

24. Infiltrate into all classes and levels of society and government for the purpose of fooling, bemusing and corrupting the youthful members of society by teaching them theories and principles that we know to be false.

25. National and International laws should be used to destroy civilization and enslave and control the people.

Vatic Note 2: Now watch this video about Satanism and the required elements of practice that was devised by allister Crowley in his book "Magik". Watch it in relation to what Obama has done..... this video literally blew me away. Pay special attention to reverse speech of Obama's and what it says. This is beyond coincidence. Also remember we did a big series on the music industry and John Todd told us how each album is then infused with reverse speech which Crowley also told his followers to do... walk backwards, speak backwards, etc. Watch this and decide for yourself. I believe this is also the case for bush, so this is not a party right and left issue, this is a satanic issue. IGNORE CNN REPORTERS EXCESSIVE JABBERING. RATHER WATCH WHAT ACTUALLY HAPPENS OUT OF OBAMA'S OWN MOUTH. I wish we had done this with Bush, but we didn't know back then.

Email ThisBlogThis!Share to TwitterShare to FacebookShare to Pinterest
Labels: Satanism

Jerzy, thank you for notifying us of your problems here. We need more information to follow up on it to correct it since you are the first one to have encountered such problems that we know about.

Let me assure you, this is not us doing it. It could well be simply a system problem or an intrusion outside our system and thus I need more specific information so we can track it and send it to google to fix it, explain it, or we move to a more secure location. Its not pleasant for them to have us posting verifiable truth about them on here, so its possible they are trying to do something to harm the blog.

We are in this together and I ask you to assist us further in getting to the root of it by giving us which blog these things happened in and which video if more than one, OK???? Please help us and contact me at vatic2010@gmail.com so we can pursue this together. I assure you if it were us doing it, your comment would not have made it up on the board. WE only MODERATE AGAINST SPAM OR ILLEGAL SUGGESTIONS like committing crimes. OK??? Thanks for your aid in advance.