Vatic Note:  Now this was fascinating even if short.  It explains our wall street brokerage houses,  sponges, they soak up all our wealth and now we know they can't help it, its in the DNA.   LOL   Some humor necessary in the middle of all this seriousness is a good thing.   I don't think I will ever be able to look at a sponge the same again.  Frankly,  I just read recently something that blew me away...... Kangaroos have more DNA in common with humans than Chimpanzes.   Hows that for a "Huh"? 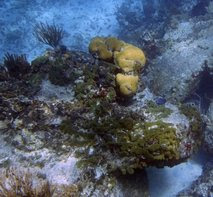 SYDNEY (AFP) – Mankind may be descended from apes but Australian scientists have found proof of links much closer to the sea floor, with a study revealing that sea sponges share almost 70 percent of human genes.

Genetic sequencing of sea sponges from the World Heritage-listed Great Barrier Reef showed the ancient marine animal shared many of its genes with humans, including a large number typically associated with disease and cancer.

Lead researcher Bernard Degnan, of the University of Queensland, said the findings "would shed light on a whole range of different things," and could lay the foundation for breakthroughs in cancer and stem cell research.

Exploring the genetic function of sponge stem cells could provide "deep and important connections" to the genes that influenced human stem cell biology, he said.

"(It) might actually inform the way we think about our own stem cells and how we might be able to use them in future medical applications," he said.

The study -- published in the journal "Nature" this week -- is the result of more than five years of research by an international team of scientists.

It required the extraction of "really pure DNA" from sponge embryos and a complex sequencing exercise, Degnan said.

It's not really surprising. We tend to take for granted the similarities we see and tend to notice differences. What the article doesn't say is, we share more than 95% of our genes with orangutans, which are more closely "related" to us than chimps.
I can easily see your typical watcher of television having the DNA of a sponge or your typical Wall Street bankster having the DNA of a leech.

Hahahaa, yeah, I like that "leech" one. Its appropriate. Did you know we share more DNA with the Kangaroo than we do with the chimpanzee?? Now that surprised me. I guess those high jumpers must be from that stock. lol